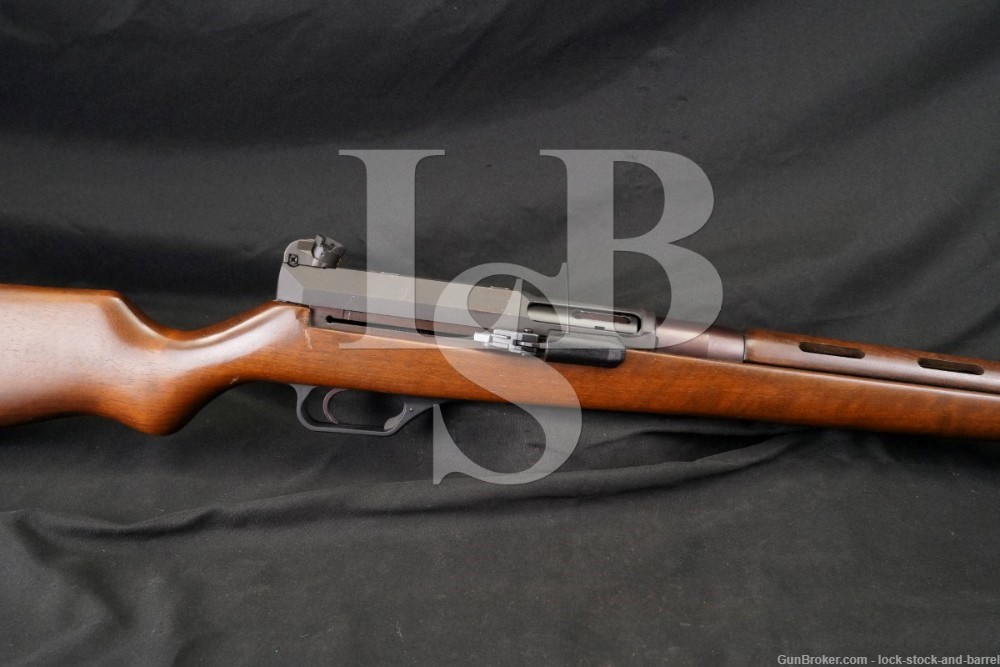 Sights / Optics: The front sight is a post pinned to a hooded, serrated, ramped base fixed to the muzzle. The rear sight is an HK-style four-position rotating “drum” type sight with one “V”-notch and three apertures. The top of the receiver is cut for an HK-style scope base (none included).

Stock Configuration & Condition: The stock is one piece smooth walnut with a separate ventilated walnut handguard held in place by a pinned nosecap, semi-pistol grip, straight comb, smooth steel “cup”-style buttplate, sling bar mounted in the left of the buttstock and a sling eyelet integral to the left of the nosecap. There is a light scratch on the right side of the buttstock, a small impact on the front of the grip, and some compressions on the right below the receiver. There are some other infrequently scattered less notable marks throughout. The LOP measures 13 3/4? from the front of the trigger to the back of the buttplate. Overall, the stock is in about Fine condition.

Type of Finish: The barrel and receiver have a phosphate or matte blued finish, the barrel shank is polished blued.

Overall Condition: This rifle retains about 96% of its metal finish. The shank shows a nice plum hue. The receiver has some light scratching on the left shoulder, most not through the finish, and minor operational wear in the charging-handle slot. The screw heads are undamaged, the markings are clear. Overall, the rifle is in about Fine condition.

Mechanics: The action functions correctly. The safety is mounted on the left between the receiver and trigger guard, the magazine release is mounted at the front of the trigger guard. We have not fired this rifle. As with all used firearms, a thorough cleaning may be necessary to meet your maintenance standards.

Box, Paperwork & Accessories: This rifle comes with a single 3-round magazine.

Our Assessment: Heckler & Koch is well known for their roller-delayed blowback military rifles and they also brought the operating system to sporting rifles with their 630, 770, and 940 lines. The SL6 and SL7 rifles were sort of a half-step with some military-style features such as the ventilated handguard, sights, and sling attachment points, but also with sporting features such as 3-round flush magazines, the same mounting options for optics as their sporting rifles, and a less “military-style” appearance than most of their post-war offerings. This example is an SL7 chambered for .308 Winchester and is in Fine condition with only a few scattered light marks in the metal and wood, a great bore and strong mechanics. This would make a nice all-around rifle for hunting, recreational target shooting or even defense. In its high condition, it will also make a nice addition to an HK collection to sit between an HK91 and a 770. Please see our photos and good luck!