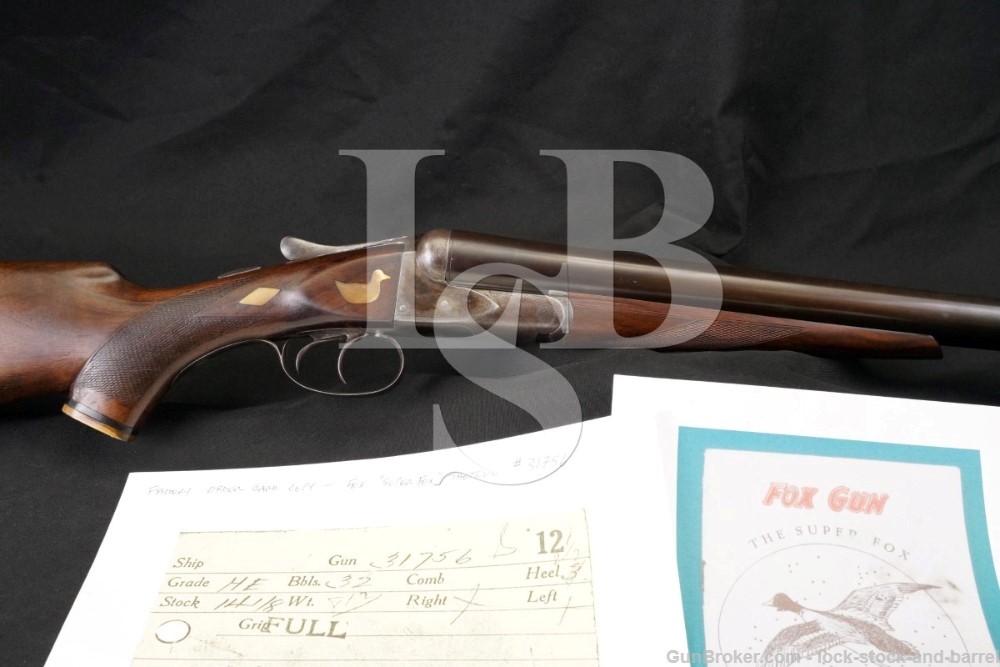 Action Type: Top Break Side by Side Box Lock Hammerless Shotgun with Ejectors

Sights / Optics: There is a silver-colored bead mounted to the front of the rib. The top of the rib is finely serrated to reduce glare.

Stock Configuration & Condition: The stocks are two-piece checkered walnut with splinter forend, horn-cpaped pistol grip, straight comb and orange rubber buttpad. There are inlays in the sides of the wrist which also appear to be made of horn with a diamond on each side, a squirrel on the left and a duck on the right (not factory inlays). The stocks have some scattered light nicks, scuffs and scratches, mostly in the buttstock. There is a more notable scratch behind the left wrist checkering. There is a short, thin crack at the left-rear of the buttstock just below the heel. The forend checkering is quite well defined and we suspect that the wood has been replaced. The wrist checkering shows more wear, but is visible. The LOP measures approximately 14 1/2″ and 13 1/2″ from the fronts of the triggers to the back of the pad, 13 3/4″ and 12 3/4″ to the back of the wood. The drop at comb is approximately 1 3/8″, drop at heel 2 3/8″. The pad is still fairly supple showing light wear and discoloration. The stocks rate in Very Good condition as refinished and/or replaced.

Bore Condition: The bores are mostly bright. There is infrequent minor erosion in the bore.

Overall Condition: This shotgun retains about 75% of its current metal finish. The finish is thinning at all edges. The barrels mostly show thinning cold blue with stronger blue in protected areas which appears to be the original finish. The border between the two appears a little streaky. The receiver has mostly muted or gone to a light patina with some weak color in protected areas. There are some scattered light nicks, scuffs and scratches with infrequent minor surface oxidation. The action shows operational wear. The screw heads range from sharp to tool marked with strong slots. The markings are clear. Overall, this shotgun is in Very Good condition.

Mechanics: The action functions correctly including ejectors. The barrels lock up to the receiver with no play. The safety engages automatically when the action is opened. We have not fired this shotgun. As with all used firearms, a thorough cleaning may be necessary to meet your maintenance standards.

Our Assessment: Ansley Fox was one of the earliest American innovators with internal hammer double guns. In 1894, at the age of 19, he was issued a patent on a system of cocking the internal hammers of a break-action gun using leverage from the barrels with his design actually containing nineteen patentable features, according to the U.S. Patent office. Fox would continue on, making it his life’s work to produce “The finest gun in the world” (as well as the finest car in the world and a few other manufacturing ventures). He even gained the praise of Theodore Roosevelt who wrote to Mr. Fox in a letter “The double-barreled shotgun has come, and I really think it is the most beautiful gun I have ever seen. I am exceedingly proud of it. I am almost ashamed to take it to Africa and expose it to the rough usage it will receive. But now that I have it, I could not possibly make up my mind to leave it behind. I am extremely proud that I am to have such a beautiful bit of American workmanship with me”.

The A.H. Fox Gun Co. would continue producing shotguns of various grades and chambered for various gauges through the late 1920s, when they fell victim to the Great Depression and were acquired by Savage Arms. This example is a desirable HE Grade, also known as the “Super Fox” produced in 1926, the heyday of A.H. Fox, during the Roaring ’20s when post-war America was booming and Fox guns were selling as well as ever. The Super Fox was chambered for the newly emerging 3″ shells and was designed and crafted for those who wished to take the longest shots on the biggest birds. Early advertisements boasted that the guns could kill single ducks “with the greatest certainty at sixty yards, perfectly capable of killing singles up to seventy yards, with the ability to take birds out of flocks at much longer range”. While this is likely quite true, there were also early guarantees of 80 to 85 percent full-choke patterns, which did not prove repeatable, especially with varying ammunition. After this pattern guarantee was discontinued, barrels began to be marked “BARRELS NOT GUARANTEED” to make clear that this early marketing guarantee was not being honored for those guns produced after it was abandoned.

Today, A.H. Fox shotguns are quite collectible. As Fox’s reputation was built on quality, their success didn’t necessarily mean that a huge number of guns were made. For the dedicated Fox collector, this HE Grade would make a wonderful addition to a collection. It also may still prove able to serve, nearly 100 years later, to take down flesh or clay birds in style. Please see our photos and good luck!