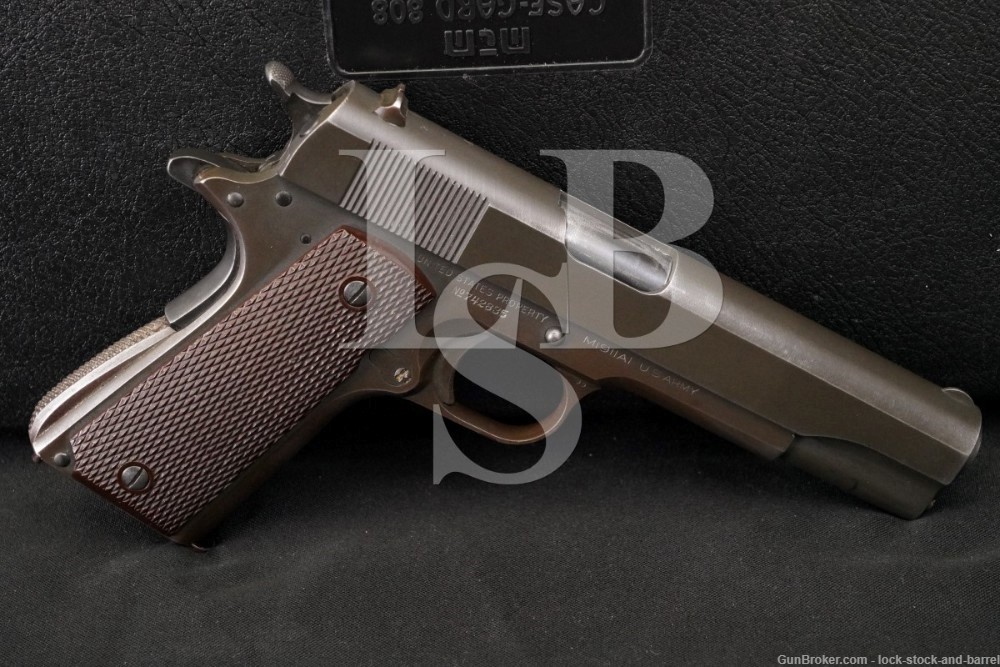 Stock Configuration & Condition: The grips are two-piece checkered brown “Coltwood” plastic with reinforcement rings around the grip screws but without reinforcement ribs on the interior. The interior of the grips have mold-number markings. The grips have a few light nicks and minor handling wear. There are a couple of small tool marks in the reinforcement rings around the screws. The checkering is well defined. There are no chips or cracks. Overall, the grips are in about Fine condition.

Bore Condition: The bore is semi-bright with sharp rifling. There is some scattered light erosion in the bore, mostly in the grooves.

Overall Condition: This pistol retains about 85% of its metal finish. The finish is generally strong with the balance mostly in handling wear in the grip areas and edge-thinning. There is some other scattered minor wear and the action shows operational wear. There are a few light nicks and scratches including under the slide stop on the left of the frame. Some of the worn areas, mostly in the frontstrap, show discoloration from oxidation. The screw heads range from sharp to tool marked with strong slots. The markings are clear. Overall, this pistol is in Very Good condition.

Box, Paperwork & Accessories: This pistol comes with a single 7-round magazine. and a black plastic case. The magazine has light operational wear, infrequent minor surface oxidation, intact feed lips and a strong spring.

Our Assessment: The 1911 and 1911-A1 pistols served the military of the United States from 1911 to 1985, through two World Wars and the Korean and Vietnam wars. They gained a reputation as a reliable handgun with plenty of stopping power, and are held in high regard by those who have used them. Since their introduction, the 1911 has seen a number of design changes, most minor, but the 1911-A1 introduced the arched mainspring housing, shorter trigger, and relief cuts behind the trigger on the frame. In addition to these inter-war changes, Colt began finishing the guns by parkerizing them, a more durable finish than the original bluing.

This example was produced by Colt in 1941, as the “Arsenal of Democracy” was gearing up, but before the United States had officially entered the war. It is a nice example of a 1941 as well, with proper grips, sights, original finish and even a serial-matching slide. The pistol is in Very Good condition, retaining about 85% of its metal finish, a very shootable bore and strong mechanics. It will make a good addition to a Colt or WWII small arms collection, especially for those who want a representative example of each iteration of the design. Of course, it could still prove to be a nice shooter, too. Please see our photos and good luck!