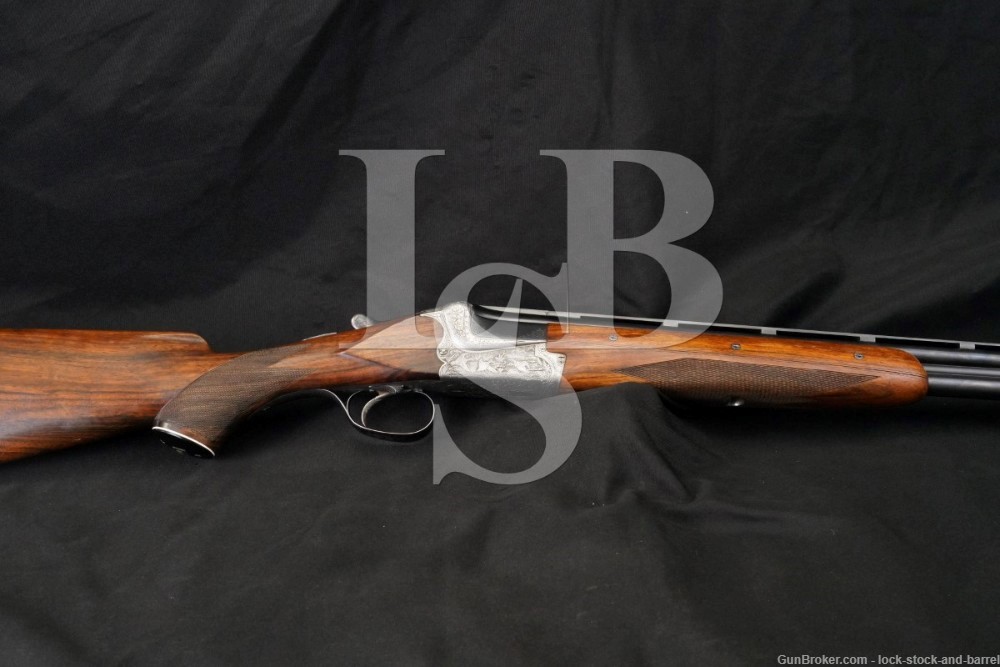 Sights / Optics: There is a silver-colored bead in a base at the front of the rib. The top of the rib is checkered for glare reduction.

Stock Configuration & Condition: The stocks are checkered walnut with capped pistol grip, straight comb with cheekpiece, and black rubber Decelerator buttpad. The forend is three pieces with a detachable checkered bottom portion and smooth panels on each side above this, secured by screws. The stocks have some scattered light nicks, scuffs and scratches. There are a couple of more notable compressions in the comb and the top-left forend panel. There are a few more notable marks on the left of the buttstock behind the cheekpiece. We don’t see any kind of break or crack which would require such, but there is a dowel through the wrist in the cheeks, visible on each side. There are short, thin cracks in the wrist at the rear of each tang. The checkering is generally well defined. The LOP measures 14 1/8″ from the front of the trigger to the back of the buttpad, 13 1/8″ to the back of the wood. The pad has minor wear, mostly shaping wear around the edges, and is still fairly supple. Drop at comb is approximately 1 1/2″ and drop at heel 2 1/8″. Overall, the stocks are in about Very Good condition as likely refinished.

Finish Originality: Most finish is original, there is some touch-up around the rear four rib posts.

Bore Condition: The bores are bright. There is no erosion in the bores. The bottom barrel has minor denting in the bottom, with the nicks in the bottom visible on the exterior.

Overall Condition: This shotgun retains about 92% of its metal finish. The finish is thinning at some edges. The top barrel has discoloration around the rear four rib posts and there is evidence of separation between the posts and the barrel. There are some nicks on the bottom of the bottom barrel about 7″ from the muzzle. There are a few other scattered minor marks. The receiver’s coin finish has infrequent minor discoloration from oxidation. The action shows operational wear. The screw heads range from sharp to tool marked with strong slots. The markings are clear except for “Weichlot” which is shallow and incomplete. Overall, this shotgun is in Good-Very Good condition and would easily rate Very Good-plus but for the dents and the rib separation.

Mechanics: The action functions correctly. The barrels lock up with no play to the receiver. The ejectors function properly. The cocking indicators are located on each side of the receiver at the rear. The safety does not engage automatically when the action is opened, but functions properly when set manually. The trigger selector is a switch to the right of the trigger.We have not fired this gun. As with all used firearms, a thorough cleaning may be necessary to meet your maintenance standards.

Our Assessment: The name Merkel has been around in Suhl for more than 200 years, with several different “Merkels” being known for making high quality sporting arms. Gebrüder Merkel, today known as Merkel Jagd und Sportwaffen, is the only one which has stood the test of time. Surviving two world wars, Soviet occupation and the East German state, it is still around to this day! This Merkel 28 gauge over-under shotgun was made post-World War II in Suhl under the East German government. It is interesting that such a high quality sporting arm would come out of a socialist nation in the midst of the Cold War, Merkel was one of the only factories in Suhl left intact by the Soviet occupiers, with their sporting guns being sent East as war reparations.

This gun has since been rescued and brought to America, intriguingly without an import mark. This may indicate that it came here before import marks were required in 1968 or, more likely, it came home with an American service member who was stationed in Germany during the Cold War. There is some minor denting in the bottom bore and the rib has some separation toward the rear, but the gun otherwise shows fairly light wear given its age. It is a beautiful gun that would be perfect for any sportsman who can appreciate its mix of beauty and quality. Please see our photos and good luck!