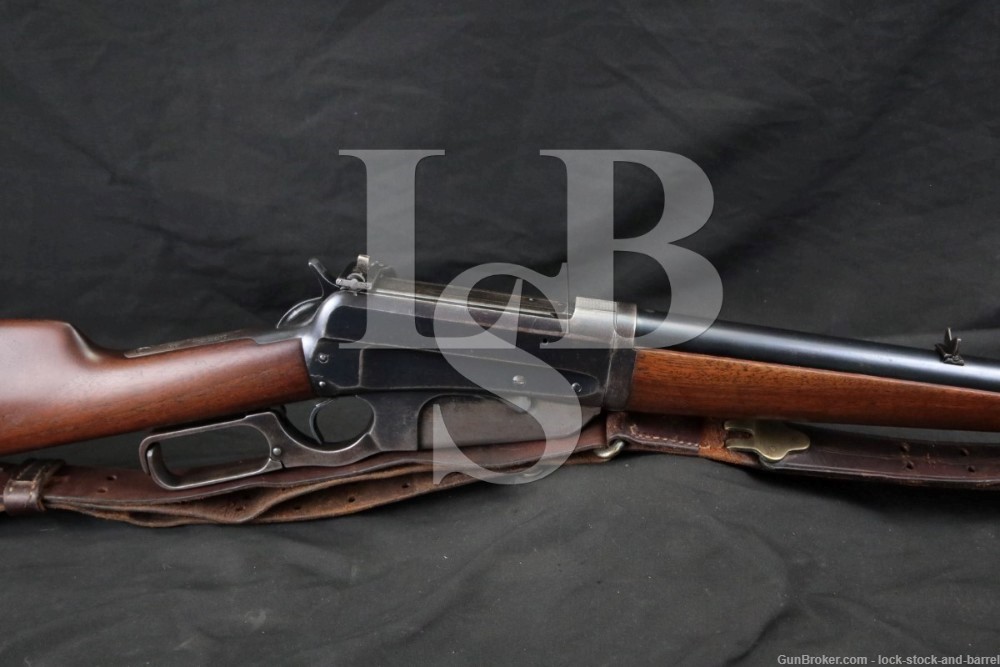 Markings: The left side of the receiver is marked “MANUFACTURED BY THE WINCHESTER REPEATING ARMS CO. NEW HAVEN. CONN. U.S.A. / PATENTED NOV.5.95. NOV.12.95. AUG.17.97. JAN.25.98. AUG.23.98. AUG.6.1907.” with the right portion of the marking partly obscured by the Lyman receiver sight. The upper tang is marked “MODEL   95 / -WINCHESTER- / TRADE MARK REG. U.S. PAT. OFF. & FGN.”. The lower tang is marked “408280” and “B”. The top-left of the chamber ring and the top rear of the barrel are marked with a circled “WP” proof. The left side of the barrel is marked “-NICKEL STEEL BARREL- / ESPECIALLY FOR SMOKELESS POWDER” and “35 W.C.F.”. Special-order assembly number “351” is marked on the front face of the barrel extension, the left of the bolt, left of the bottom tang, left of the trigger plate, the top tang inlet in the top of the wrist and twice on the rear face of the forend. The bottom of the barrel has standard Winchester inspection marks and “181888” (it is not clear what this marking signifies as the barrels were not serial-marked).

Sights / Optics: The front sight is a Marble No. 6 white beaded blade dovetailed to a base fixed to the front of the barrel. The rear sight is a two-leaf folding sight. The rear leaf has a white triangle aiming reference with no notch. The other leaf has a deep, wide “V”-notch. The notch is fine-adjustable for elevation. A Lyman receiver sight is installed on the left of the receiver, adjustable for windage and elevation. The top of the chamber ring is matted for glare reduction.

Stock Configuration & Condition: The stocks are two-piece smooth walnut with steel crescent buttplate, Schnabel forend tip with ebony insert, straight grip, and straight comb. There is a sling plate mounted in the belly with a sling swivel mounted to the bottom of the barrel forward of the forend. The stocks have some scattered light nicks, scuffs and scratches. There is light wear on the bottom-rear of the forend from the takedown switch. There is a tiny loss at the top-front corner of the wrist to the left of the top tang. There are no cracks. The LOP measures 12 5/8” from the front of the trigger to the back of the buttplate. The plate has mostly worn to white with some light surface oxidation. The stocks rate in about Very Good overall condition.

Overall Condition: This rifle retains about 80% of its metal finish. The finish is thinning at all edges. Most of the balance is finish wear on the magazine, lever and top tang. There is some other scattered more minor finish wear. There are scattered light nicks, scuffs and scratches with infrequent minor surface oxidation. The action shows operational wear. The screw heads range from sharp to tool marked with usable slots. The markings are generally clear, the caliber marking on the barrel is poorly struck. Overall, this rifle is in Very Good condition.

Mechanics: The action functions correctly. The trigger is crisp. The lever locks up correctly. We have not fired this rifle. As with all used firearms, a thorough cleaning may be necessary to meet your maintenance standards.

Our Assessment: The 1895 Winchester was the first lever-action model to incorporate a box magazine. The box magazine allowed the use of spitzer-type bullets without the danger of ignition in a tubular magazine. The use of spitzer bullets improved ballistics and allowed for much higher velocities, especially with the use of smokeless powder. At the time of its introduction, the 1895 was considered the lever action big-game rifle, but it also saw favor with some militaries, being purchased in large numbers by the Russian Empire for WWI, given to Pancho Villa’s best troops during the Mexican Revolution, and 10,000 were purchased by the US Military for use during the Spanish American War. With its quick handling characteristics, box magazine and pointed bullet capability, the Model 1895 changed the world of sporting rifles forever. Teddy Roosevelt himself favored the 1895 Winchester, considering his rifle chambered in .405 to be the “medicine gun” for lion.

This rifle is a takedown version which was made in 1923, chambered for .35 WCF. It has matching assembly numbers, indicating that it shipped from Winchester with special-order features, likely including the rifle’s sling mounts. This example shows honest wear given its age, but is a nice specimen of a takedown Model 1895. Please see our photos and good luck!