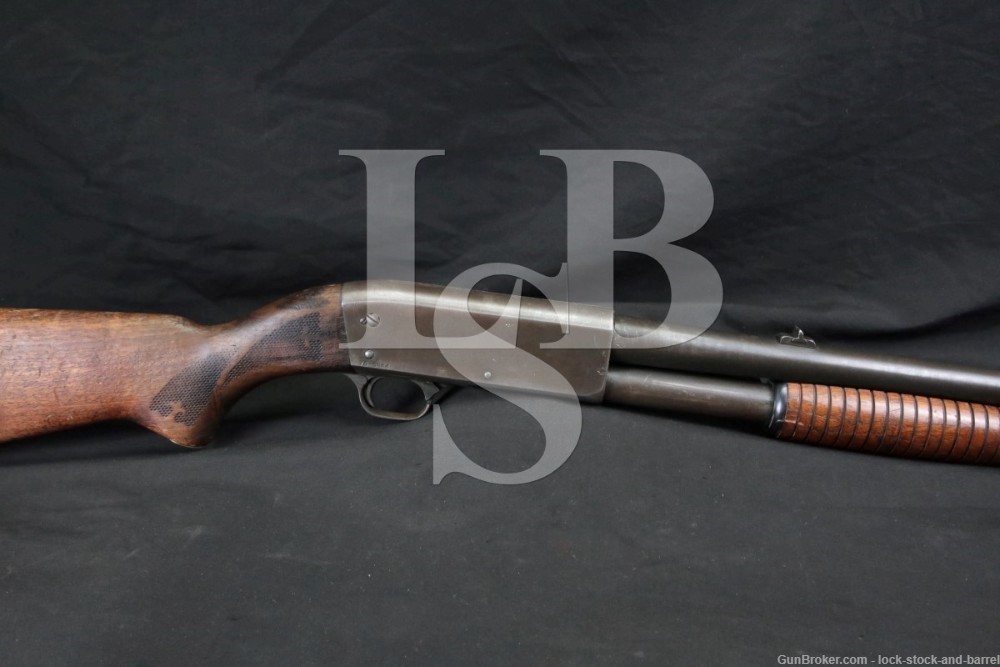 Year of Manufacture: Circa 1970

Sights/ Optics: The front sight is a brass blade painted black on a serrated, ramped base screwed to the front of the barrel. The rear sight is a square notch dovetailed to a base fixed to the rear of the barrel.

Stock Configuration & Condition/ Grip: The stock is two-piece wood with a grooved “corn-cob” style slide handle, press-checkered pistol grip stock with straight comb and ventilated orange rubber Ithaca recoil pad. There is a sling stud in the belly and another mounted to the bottom of the barrel lug. The bottom of the grip has a brass disc marked “77-87”. The stocks have light-moderate handling wear, most notable in the right of the wrist. There are scattered nicks, scuffs and scratches with areas of thinning finish, mostly in the buttstock. There are no chips or cracks. The LOP measures 13 7/8″ from the front of the trigger to the back of the recoil pad. The pad shows moderate wear, but is still fairly supple. Overall, the stocks are in Good-Very Good condition.

Overall Condition: The shotgun retains about 75% of its metal finish. The finish is thinning at all edges. There is scattered light finish wear. There are scattered light nicks, scuffs and scratches. Some of the worn areas are starting to go to a light patina. The action shows operational wear. The screw heads range from sharp to tool marked with strong slots. The markings are clear. Overall, this shotgun is in Very Good condition.

Mechanics: The action functions correctly. This shotgun will slam-fire as designed. We have not fired this shotgun. As with all used firearms, a thorough cleaning may be necessary to meet your maintenance requirements.

Our Assessment: The Ithaca 37 was designed by the company to compete with the Winchester Model 12. The gun was based on one of John Browning’s patents which was used to create the Remington Model 17, the patent did not expire until 1932 which delayed the shotgun’s introduction. Remington discontinued the Model 17 in 1933 which finally allowed Ithaca to move forward with their project. Since the Model 17 had improvements made to it which were also held by a patent owned by Remington, they were designed by John Pederson, until 1936 the project was further delayed. Finally, the Remington patents expired and Ithaca applied patented improvements made by Harry Howland. The new shotgun was finally released in 1937, hence the designation Model 37. The Model 37 proved an extremely successful shotgun, and was eventually even adopted for use by the U.S. military and numerous law enforcement agencies. The gun was called the Featherlight when it was introduced, although its weight was not significantly lighter than most other shotguns.

Ithaca 37s made prior to 1975 were configured in a manner that allowed them to be slam fired, allowing the gun to be fired by holding down the trigger and cycling the slide. This example was made specifically for police service and was used by the LAPD. The shotgun has some wear consistent with this use, but it remains mechanically sound and should prove a fun addition to any collection. Good luck on your bid!