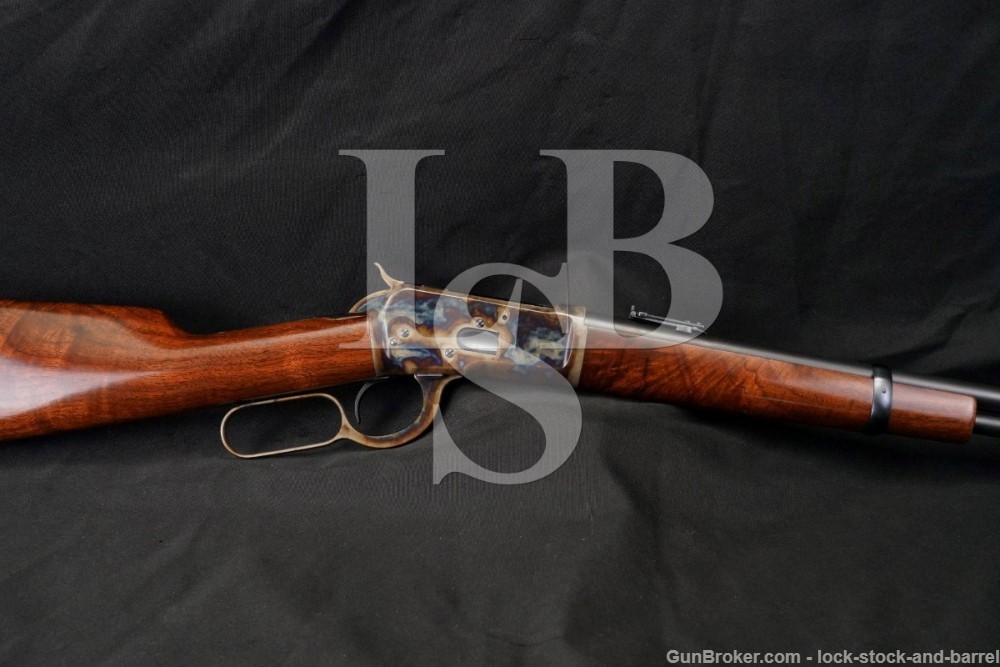 Sights/Optics: The front sight is a brass blade slotted and pinned to a rectangular base that is fixed to the barrel. The rear sight is a folding ladder-style sight which presents a “V”-notch when folded down. When folded up, the ladder has a “V”-notched slider and the arm of the ladder is graduated from 2-9 in hundreds of yards.

Finish Originality: This rifle was restored by Turnbull Mfg. Co.

Overall Condition: This rifle retains about 99% of its metal finish. The action shows minor operational wear. Otherwise, there are only light handling marks. The screw heads are sharp. The markings are clear. Overall, this rifle is in Excellent condition as restored.

Mechanics: The action functions correctly. The hammer has a half-cock safety position. The trigger is crisp. We did not fire this rifle. As with all used firearms, thorough cleaning may be necessary to meet your maintenance standards.

Box, Paperwork, and Accessories: This rifle comes with an 08/12/13 dated invoice from Turnbull Mfg. Co. detailing the restoration services applied to this rifle.

Our Assessment: The Winchester Model 1892 is a lever action repeating rifle designed by famed gun designer John Moses Browning. It was made as a smaller, lighter version of his Model 1886 design, chambered for pistol cartridges rather than rifle cartridges. This would replace the previous Model 1873 and more than a million 1892 would be made between their introduction and 1932. The design is still in production to this very day, its popularity boosted by its use in Western films and television shows.

This example is a Model 1892 saddle ring carbine which was made in 1917 and is chambered in .25-20 Winchester. This rifle has been to Turnbull Mfg. in 2013 for a restoration and the result is a beauty to behold. The stocks are 2X fancy walnut, the barrel and magazine tube are rust blued and the receiver, lever and hammer show the gorgeous figuring in their case color finish which has brought Turnbull so much well deserved fame. This rifle should be of real interest to the Winchester collectors and will make a wonderful addition to any collection. Please see our photos and good luck!