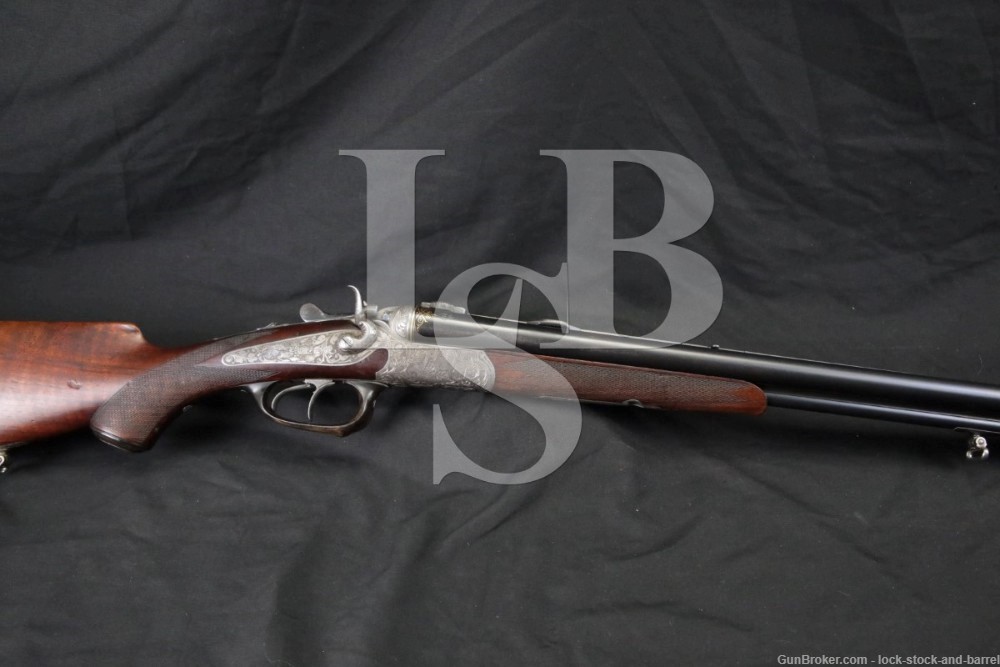 Markings: The top of the right barrel is marked “E. A. MERKEL”, the top of the left “SUHL”, these markings are ingold. Each barrel has a crowned “BSJ” marking. There is decorative gold inlay at the rear of each barrel. The barrel flats and bottoms of the barrels have a series of German proof marks including the eagle “Nitro” proof which began use in 1912, but without a date code which became mandatory in 1922. The rifle barrel is marked “9985”, “St.m.G.” (suitable for use with steel jacketed bullet) and “8.7 mm” (land-land measurement for 9.3mm cartridge). The water table has German proof marks. The receiver, the exposed portions of the forend iron and latch and the cap for the ammunition storage in the belly have elaborate relief engraving with game scenes, foliate scroll and matting on the top of the receiver. The top tang is marked “SCHROT” and “KUGEL” in gold (indicates “shot” and “bullet”).

Sights / Optics: The front sight is a beaded blade in-line dovetailed to the front of the rib. There is a folding “U”-notch rear sight which flips up when the rifle barrel is selected. The rear sight base is dovetailed and screw-set to the rib. The rear of the rib has bases for a claw-style QD mount (none present)

Stock Configuration & Condition: The stocks are two-piece checkered walnut with splinter forend with slight schnabel tip, horn guard, horn capped grip, straight comb with cheekpiece, serrated horn buttplate, metal door in the belly over a four-cartridge storage compartment and a sling swivel mounted to the plate for the compartment door (there is another swivel mounted to the bottom of the rifle barrel in front of the forend). The stocks have scattered nicks, dings, scuffs and scratches. There are a few tiny losses around the edges of the forend. The checkering is generally well defined. There are no cracks. The LOP measures 13 7/8″ and 12 7/4″ from the fronts of the triggers to the back of the buttplate. The plate has scattered wear and some grain-line cracks with well defined serrations. Overall, the stocks are in about Very Good condition.

Overall Condition: This drilling retains about 92% of its metal finish. The barrels have generally strong finish with some wear on the sides over the forend. There is a little bit of loss in the gold at the chamber-end of the barrels in the top. The receiver’s coin finish is generally strong with some minor discoloration in the matted relief areas of the engraving. There are some scattered minor nicks, scuffs and scratches. The action shows operational wear. The screw heads range from sharp to lightly tool marked with strong slots. The markings are clear. Overall, this shotgun is in Very Good condition.

Mechanics: The action functions correctly. There is a lever on the top to open the action. The switch on the top tang selects between the rifle and shotgun barrels. The front trigger can be set by pushing forward until it clicks. When the rifle barrel is selected, the rear trigger can still be used to fire the left shotgun barrel. The barrels lock up with no play to the receiver. We have not fired this drilling. As with all used firearms, a thorough cleaning may be necessary to meet your maintenance standards.

Our Assessment: Combination guns have been a popular “do-all” gun for generations, with some still being produced today. The combination of a shotgun for fowl and a rifle for terrestrial game allows the hunter to become familiar with one gun for all their trips to the field. There are several configurations for combination guns from side-by-side to over-under, with drillings specifying three-barrel variations. Examples such as this, with two shotgun barrels and one rifled barrel are somewhat standard, as drillings go.

This example was made by Ernst August Merkel in Suhl, Germany between 1912 and 1922. The name Merkel has been around in Suhl for more than 200 years, with several different “Merkels” being known for making high quality sporting arms, including Ernst. This example of his work is a back-action hammer gun, there is a selector lever which allows the rifle barrel to be selected and the front trigger, which fires the rifle barrel, also has a single-set feature for a light crisp pull. Engaging the rifle barrel automatically raises a “U”-notch rear sight and the rib has provision for a QD scope mount, though none is present. In Very Good condition, this gun shows signs of use over the last century, but is still in great mechanical shape with much of its original finish. The gun also has beautiful engraving befitting its fine craftsmanship with wonderful detail in its game scenes. This will make a great piece for drilling or fine European firearms collectors. Please see our photos and good luck!