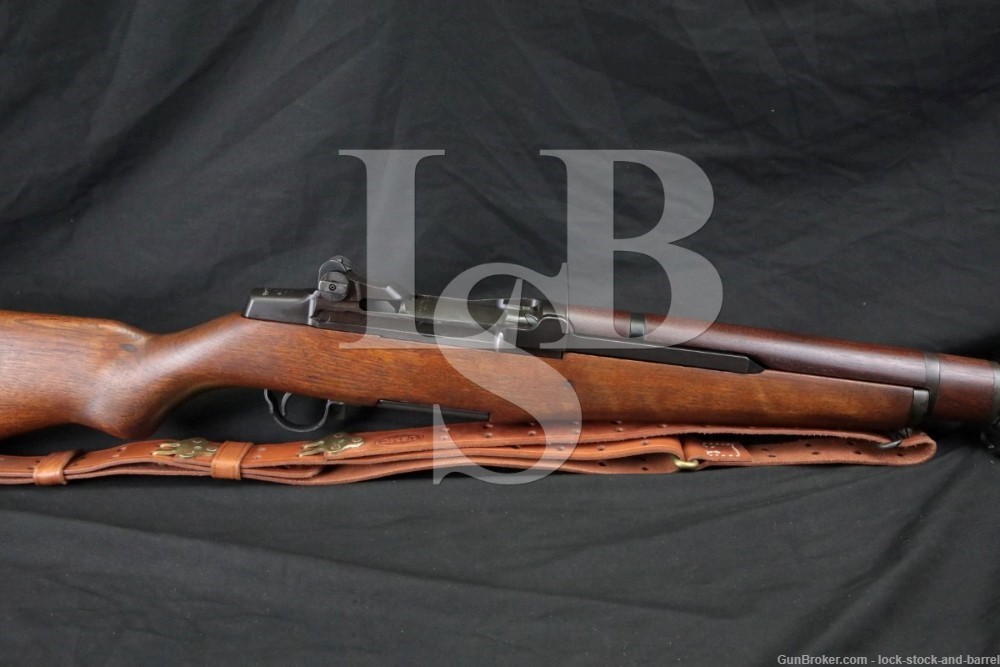 Stock Configuration & Condition: The hardwood stock has a pistol grip, metal nose caps, a stacking loop, two sling loops and a metal buttplate with hinged door for storage in the butt. The refinished buttplate has scratches, small dents and wear showing through the new finish. The edge of the stock has had surface wood removed with a router where the action and trigger group meet the wood. The wood shows scattered scrapes and handling marks. The right side of the butt shows sanding marks. The LOP measures 13 inches from the front of the trigger to the back of the buttplate. The stock rates in about Very Good Plus to Fine overall condition as refurbished.

Bore Condition: The rifle uses a 2 grooved bore that is made from a Model 1903 barrel which is matted to the rear of an M1 Garand barrel. The muzzle and grooves are light gray. The rifling is crisp. There is fouling and light erosion at the muzzle and in the grooves. The bore shows an M.E. of 1. The throat shows a T.E. of 2.5.

Overall Condition: This rifle retains about 96% of its metal finish as refinished. The metal shows scuffs, scrapes and handling marks. The bottom rear of the receiver shows light thinning. The gas cylinder lock screw shows thinning. The rear sight cover shows light discoloration. The receiver and bolt show light operational wear. Most of the markings are deep. Overall, this Restored rifle rates in about Very Good Plus to Fine condition as refinished.

Mechanics: The restored receiver shows signs of a re-weld. The rifle uses a 2 grooved bore that is made from a Model 1903 barrel which is matted to the rear of an M1 Garand barrel.
The action functions correctly. We did not fire this rifle. As with all used firearms, a thorough cleaning may be necessary to meet your maintenance requirements.

Our Assessment: This Restored M1 Garand was originally built during WWII by Springfield Armory. It has since been converted to “Tanker Garand” configuration. The restored receiver shows signs of a re-weld. The rifle uses a 2 grooved bore that is made from a Model 1903 barrel which is matted to the rear of an M1 Garand barrel.
This Tanker Garand looks good, has nice markings and should be a ton of fun at the range.

Here is some Tanker Garand information from scott-duff.com/whats-a-tanker-garand/:
The “Tanker Garand” is a “misnomer.” During WWII two separate prototypes were developed for paratroop use. The first was the M1E5. The M1E5 had a short barrel and a folding metal stock. It was developed and tested in the Summer of 1944, but then abandoned because of the loud report and large muzzle flash from the short barrel. In the fall of 1944 the Pacific Warfare Board ordered a test quantity of 150 M1 Rifles to be shortened and tested for jungle and paratroop use. These conversions were rather crudely done in the Pacific Theater of Operations, either in Australia or the Philippines. A request was made that Springfield Armory manufacture these shortened M1s, and two were sent by air to the USA for testing. When the Springfield Armory staff saw the improvised short Garands, they recognized that they were the same as the M1E5 but with a normal wood stock. Thereupon they assembled their own version, designated T26. After testing the same conclusions were drawn as before; the barrel was just too short to be practical. Thus only one T26 was ever made in the USA. Of the two test rifles sent from the Pacific, one is in the Springfield Armory Museum, and one is reportedly at the West Point Museum. The lone T26 was reported destroyed in testing at the Aberdeen Proving Grounds in Maryland…Robert Penney noted the short Garand at the Springfield Armory museum during a visit there and decided to meld his interest in tanks with his business interests, Alpine and National Ordnance, prime “remanufacturers” of Garands from Garand scrap. Penney decided that a short T26-type Garand would fit nicely in a tank turret, and coined the term “Tanker Garand.” However, the short Garands that were tested by the Army during WWII were not intended for use by tank crews! Nevertheless, Penney’s name for the T26-type rifle stubbornly stuck; few gun people recognize “T26” but nearly everyone has heard of the “Tanker Garand.” Even now when M1s have been much more available, the popularity of a short Garand remains strong.