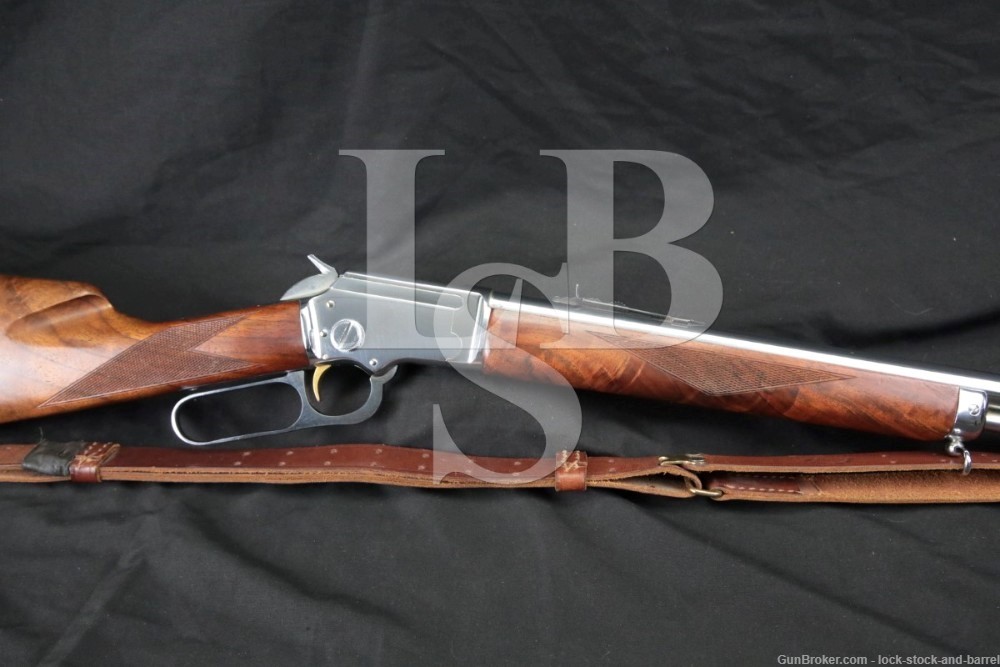 Sights / Optics: This rifle is mounted with a “U” notched rear elevator sight dovetailed into the barrel and a hooded brass beaded blade front sight dovetailed into a serrated and ramped base screwed to the barrel. The top of the receiver has three drilled, tapped, and filled holes. The left side of the receiver has two drilled, tapped, and filled holes.

Stock Configuration & Condition: The stocks are two-piece checkered walnut. The buttstock has a straight grip, a straight comb, and a checkered black Marlin hard rubber buttplate. The forend has a chrome steel nose cap with a chrome sling swivel on the bottom. There is also a chrome sling swivel in the belly. Attached to the slings is a Braver Bros brown leather sling. The Marlin Bullseye is present in the belly. There are a few light draglines and faint compressions on the sides of the stocks. There is one slightly more noticeable small scratch on the left side of the buttstock. There are no chips or cracks. The checkering is sharp. The LOP measures 13 3/8” from the front of the trigger to the back of the buttplate. The plate shows faint wear and the checkering is sharp; the white spacer has receded ever so slightly. The stocks rate in about Fine-Plus overall condition.

Bore Condition: The bore is bright with sharp rifling. There just a few faint spots of erosion near the muzzle.

Overall Condition: This rifle retains about 97% of its metal finish. There are some faint, superficial scratches and nicks on the sides of the receiver. There is some minor buildup in some of the crevices. The markings are clear and the screwheads are sharp. Overall, this rifle rates in about Fine-Plus condition.

Mechanics: The action functions correctly. The hammer has a half-cock safety position. We did not fire this rifle. As with all used firearms, a thorough cleaning may be necessary to meet your maintenance standards.

Our Assessment: This is a 90th Anniversary Commemorative Marlin Golden Mountie Model 39A, manufactured in 1960, that sports a beautiful chrome finish and is one out of the only 500 that were produced. This rifle commemorates 90 years of Marlin Firearms Co. manufacturing since they opened their doors in 1870. This takedown rifle is in about Fine-Plus overall condition with 97% of its metal finish remaining. The bore is bright with sharp rifling and no erosion. The Marlin collectors should show an interest in this rifle. Please see our photos and good luck!