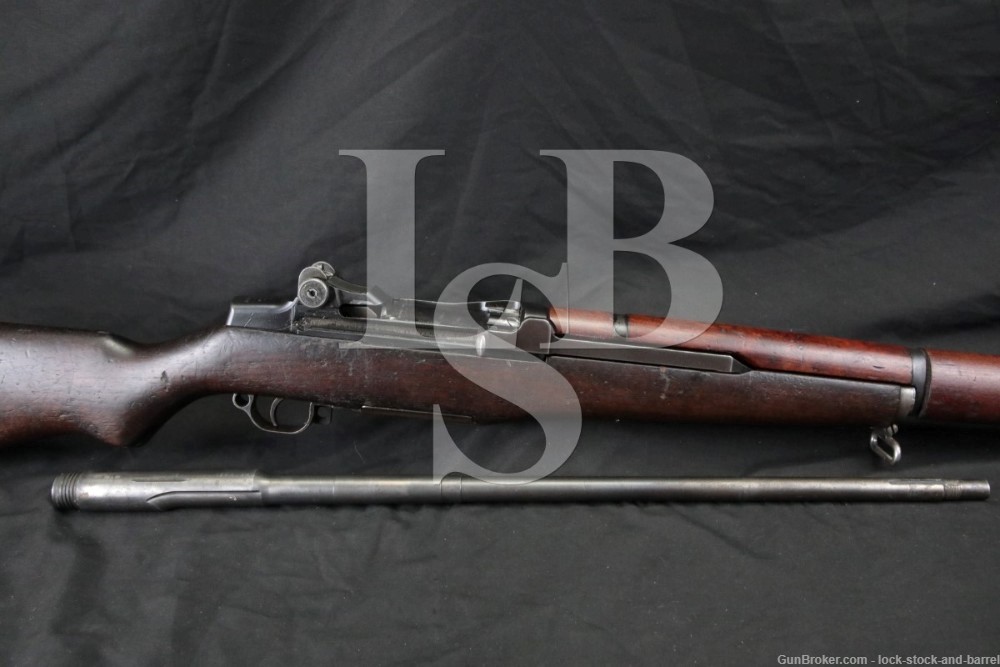 Stock Configuration & Condition: The bottom of the butt is marked with a number that does not match the serial number.
The hardwood stock has a pistol grip, metal nose caps, a stacking loop, two sling loops and a metal buttplate with hinged door for storage in the butt. The buttplate shows scratches, thinning and surface erosion. The bottom of the grip shows an unfilled cutout. The left side of the handguard shows filled surface cracks. The wood shows numerous scrapes, scratches and compression marks. Several have damaged or removed small portions of the surface wood. The LOP measures 13 1/4 inches from the front of the trigger to the back of the buttplate. The stock rates in about Very Good overall condition.

Bore Condition: The grooves are light gray and the rifling is deep. There is erosion in the bore. It is more prominent in the grooves. The bore shows an M.E. of 2.5. The throat shows a T.E. of 6.

Overall Condition: The barrel, receiver and a few small parts have been refinished. This rifle retains about 85% of its metal finish as refinished. The metal shows scrapes & scratches. The bolt shows discoloration. The bottom rear of the receiver shows cleaned surface erosion and thinning. The gas tube assembly shows thinning and a small area of light surface erosion. The bottom metal shows surface erosion. The sides of the trigger group show thinning. The receiver and bolt bolt show operational wear. The op rod shows discoloration from oxidation and thinning on the edges. The markings are deep. Overall, this rifle rates in about Very Good condition as refinished.

Box, Paperwork & Accessories: The rifle comes with an extra WWII M1 Garand barrel. It is marked with a drawing number on the bottom. The side is marked “S-A 8-41” and with a commercial British export mark “.30-06 2.5” 18 TONS”; this is NOT a British military marking. The barrel was previously installed on an M1 Garand that served outside the US, but the marking was applied commercially when the rifle or barrel was imported back into the US.
M1 Garands that served in Europe were exported back into the US through Britain (page 217).
Bore Condition: The bore is dark and the rifling is well defined. There is erosion in the bore. It is heavy in the grooves. The bore shows an M.E. of 2.

This Springfield Armory M1 Garand was made back in 1941. It has since been rebuilt and refinished. The rifle has nice markings and can ring plenty of steel out at the range. This M1 Garand comes with an extra M1 Garand barrel that has British markings on it. The barrel was previously installed on an M1 Garand that served outside the US. Good luck.