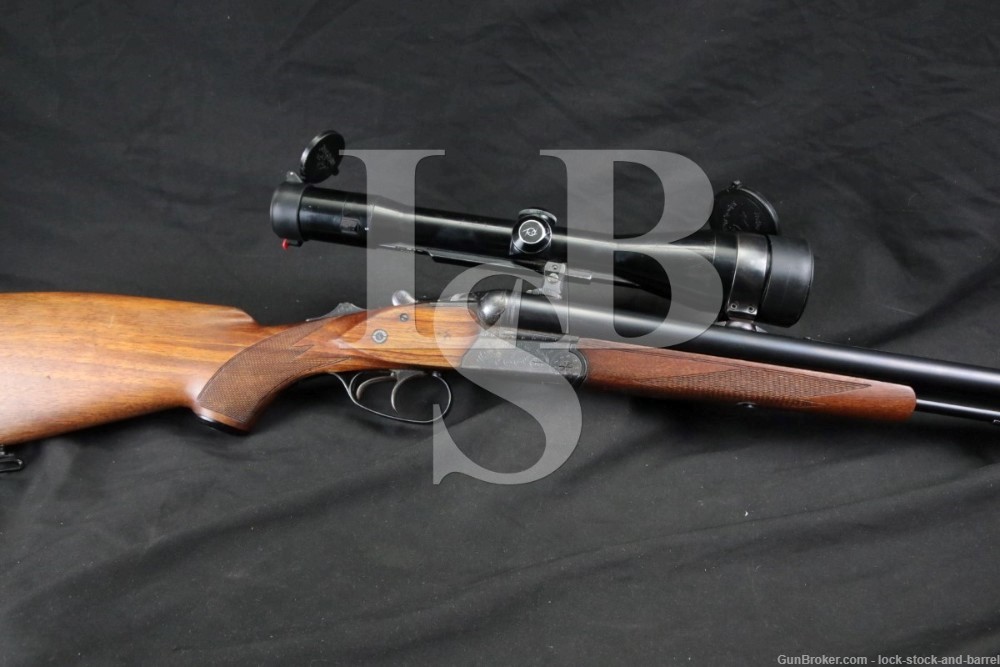 Sights / Optics: The front sight is a beaded blade in-line dovetailed to the front of the rib. There is a folding “U”-notch rear sight which is flipped up and down when the rifle-selector lever is activated/deactivated. There are two bases for claw-type optic mounts installed on the rib. Matching mounts are on the included Zeiss Diavari-Z 2.5-10×52 scope with German post reticle. The scope body has scattered light wear, the glass is clear.

Stock Configuration & Condition: The stocks are two-piece checkered walnut with capped pistol grip, curved comb with cheekpiece, ventilated brown rubber recoil pad and a sling swivel mounted in the belly (there is another swivel mounted to the bottom of the rifle barrel in front of the forend). The stocks have some scattered light nicks, scuffs and scratches and some wear in the belly toward the toe. The foren has a patch of more notable wear on the left toward the rear with some bruising. There is a tiny crack at the rear of the top tang. There are no chips. The checkering is generally well defined with the most notable wear on the left of the forend. The LOP measures 14 7/8? and 13 7/8? from the fronts of the triggers to the back of the recoil pad, 13 7/8″ and 12 7/8″ to the back of the wood. The pad has light wear and is still fairly supple. Overall, the stocks are in about Very Good condition.

Bore Condition: The left shotgun bore is gray with scattered erosion and pitting. The right shotgun bore is bright back to the front of the barrel insert. Behind the insert there is what appears to be stubborn fouling, but which may include oxidation or erosion. We were not able to remove the insert to better inspect the shotgun bore. The .22 insert is semi-bright with sharp rifling and some scattered light erosion. The 7×56 bore is gray with well defined rifling and scattered light erosion.

Overall Condition: This drilling retains about 90% of its metal finish. The finish is generally strong with some handling wear on the barrels over the forend and on the bottom-front of the receiver. There are a few light nicks, scuffs and scratches, most notable on the guard. There is some minor erosion under the finish, mostly on the receiver. The action shows light operational wear. The screw heads range from sharp to lightly tool marked with strong slots. The markings range from clear to worn, but legible. Overall, this drilling is in Very Good condition as refinish.

Box, Paperwork & Accessories: This shotgun comes with the installed scope and barrel insert as described.

Our Assessment: Combination guns have been a popular “do-all” gun for generations, with some still being produced today. The combination of a shotgun for fowl and a rifle for terrestrial game allows the hunter to become familiar with one gun for all their trips to the field. This example was produced by Simson, an East German gunmaker in Suhl. It is chambered for 12 gauge shotgun shells and the 7x56mm rimmed rifle cartridge, going a step further in its combination of features with a .22 Magnum barrel insert on the right shotgun barrel. The rifle has iron sights but also comes with a quick-detachable Zeiss 2.5-10x scope. The gun was originally made in 1978, but was re-proofed post-unification in 1998. In its condition and with its interesting origin and configuration, this would make a great piece for drilling or fine European firearms collectors. If it gets past the collectors, it will also be a great hunting gun which can hunt just about anything in North America on the ground or in the air. Please see our photos and good luck!