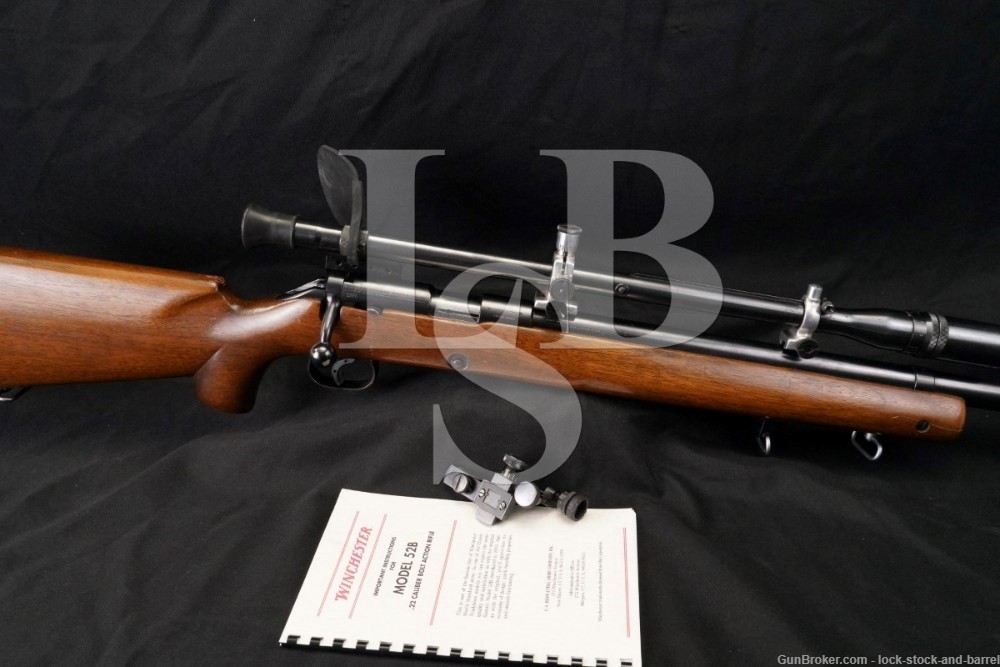 Sights/Optics: The top of the barrel is installed with three sight blocks—attached to the forward most base is a Redfield Olympic globe target sight. The sight accepts interchangeable inserts, but none are currently installed (none included). Attached to the center and rearward bases is a J. Unertl 8x target scope with crosshair reticle. Installed at the eyepiece is a black rubber eyecup and a rubber flap. The left rear of the receiver is drilled and tapped with a rail installed for a receiver sight. A Redfield International Match aperture sight is included, but not installed. The scope body is free of major wear but there are scattered spots of light surface oxidation and a bit of thinning on some controls.

Stock Configuration and Condition: The stock is a one-piece smooth walnut with beavertail forend, pistol grip, straight comb, and a checkered sheet steel buttplate. The forend has an inlet 13 1/2″ factory accessory rail with a handstop/sling mount installed. There are some scattered light nicks, compressions, dings, scuffs, and a couple of faint hairline scratches. The most apparent wear is at the front of the comb, likely from bolt removal/installation. There are no chips or cracks. The accessory rail has light wear from installing and removing accessories. The LOP measures 13 1/4” from the front of the trigger to the back of the plate. The plate has light thinning and minor nicks along the edge. Overall, the stock is in Very Good-to-Fine condition.

Bore Condition: The bore is mostly bright, the rifling is sharp. There is no erosion, but minor stubborn fouling can be seen down the length of the bore.

Overall Condition: This rifle retains about 96% of its metal finish. There are a couple little nicks on the barrel and a few spots of minor surface oxidation, mostly in the forward portions of the barrel. There is standard operational wear and light handling wear. The screw heads are sharp. The markings are clear. Overall, this rifle is in Fine-to-Excellent condition.

Mechanics: The action functions correctly. The trigger has been outfitted with a shoe and breaks crisply with no over-travel. We have not fired this rifle. As with all used firearms, thorough cleaning may be necessary to meet your maintenance standards.

Box, Paperwork, and Accessories: The installed sight and scope are included as well as the receiver sight noted above and a single 5-round magazine. A manual is also included.

Our Assessment: The Winchester Model 52 is a bolt-action .22-caliber target rifle introduced by the Winchester Repeating Arms Company in 1920. For many years, it was the premier small-bore match rifle in the United States, if not the world. Known as the “King of the .22’s,” the Model 52 has been called by Winchester historian Herbert Houze “a perfection in design”. The Model 52 was finally discontinued in the 1980s because it was too costly to manufacture, and its popularity had waned in the face of expensive European rifles. The Model 52 underwent several changes throughout its life, and although different model names were not advertised, and the barrel markings remained the same, letter suffixes were added to the serial number to designate significant design changes.

This is a model 52B which appears to have seen considerate and enthusiastic use. The rifle is in Fine-to-Excellent condition with 96% of its metal finish, some light wear in the stock, a decent bore, strong mechanics and a fine trigger. The rifle comes with a vintage 8x Unertl scope as well as a nice set of Redfield target sights. This rifle will make a nice benchrest rifle for the lucky winner or addition to a Winchester collection. Good luck and happy bidding!