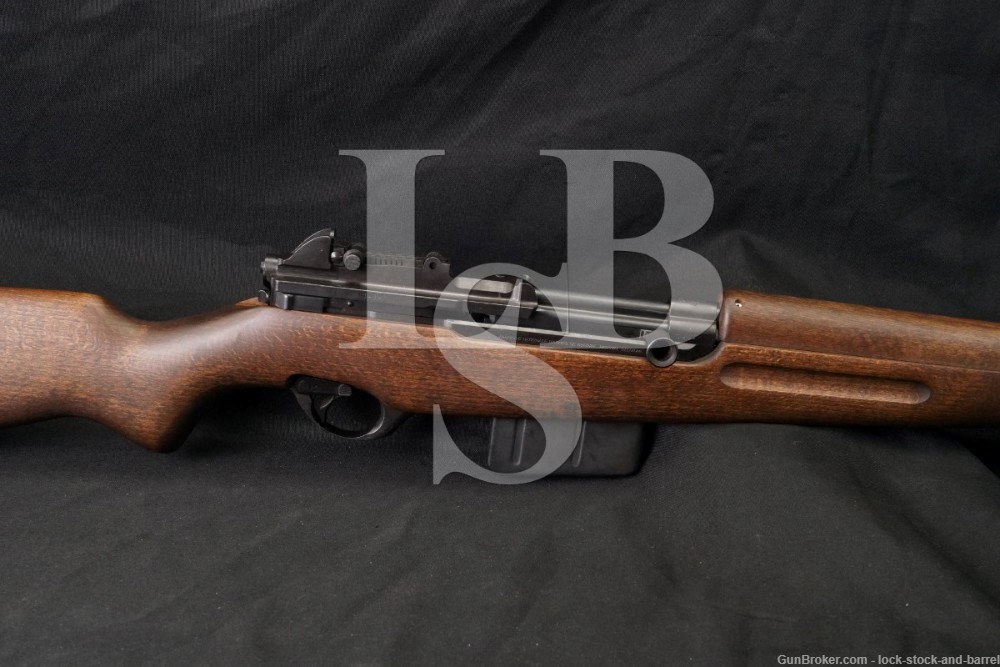 Markings: The right side of the receiver is marked “FABRIQUE NATIONALE D’ARMES DE GUERRE_HERSTAL BELGIQUE” and has the serial number “6010”. The right side of the chamber ring is marked in Egyptian numbers (Modern Standard Arabic) “6010”. The bolt and receiver cover are marked “6010” in Modern Standard Arabic but the bolt carrier is not matching (it is marked “14031”). The top of the chamber ring is marked with a crown above Arabic script (indicating the gun belonged to the Egyptian Army).  The left side of the chamber ring is marked with two Belgian Liege Proof House marks; “* / K” (used by Walthere Delsaux ca. 1929-1968) and the Belgian Perron (indicating the action passed inspection). The receiver cover and bolt have a “* / H” (used by Christophe Woit ca. 1938-1968) and the Belgian Perron. There were no Belgian inspection marks on the bolt carrier. The front left portion of the barrel is marked “CAI ST ALB VT / M49 7.62”. The gas cylinder plug is marked in Arabic Script.

Stock Configuration & Condition/ Grip: The replacement stock is three-piece wood featuring a two part handguard, a nose-cap, a barrel band with a fixed sling swivel, finger grooves on the forend, a through bolt, a sling swivel fixed ahead of the magazine, a semi-pistol grip, a straight comb, a sling swivel on the belly and an aftermarket black synthetic butt-plate. The stock has some light handling marks, and the rear left portion of the handguard has a small patch of black paint. There are no chips or cracks. The LOP is 13.25” from the trigger to the rear of the butt-plate. The butt-plate has some light handling marks. Overall, the stock is in Very Good condition.

Bore Condition: The bore is mostly bright with sharp rifling. There are a few scattered spots of light erosion and stubborn fouling.

Overall Condition: The rifle retains about 80% of its metal finish. There are some light-moderate handling marks, nicks and scuffs on the gun’s metal surfaces. Notably, there is routine wear on the muzzle cap and light wear along the leading edges. The markings remain clear. The screwheads are only lightly tooled and remain serviceable. Overall, the rifle is in Very Good condition.

Our Assessment: The FN-49 was a rifle designed by the Belgian arms manufacturer Fabrique Nationale Herstal during the 1940s. The firm was working on the now largely forgotten M1914 semi-automatic rifle but the work was disrupted when Germany conquered Belgium at the beginning of WWI. It would not be until the early 1930s when FN began to resume work on semi-automatic rifles and in 1936 Dieudonne Saive patented a prototype. Again, FN’s attempt at producing a semi-automatic rifle was disrupted by a German invasion, this time in 1940 during WWII. Saive refused to allow his design to fall into the hands of the Wehrmacht, and managed to escape to England in 1941. While in England, Saive continued to refine his design. By the end of WWII Saive had nearly perfected his design and following some final refinements the gun was ready for the market. Finally, in 1948 FN secured a contract for the new rifle from Venezuela and soon more than two dozen other nations would place orders for the new gun. The gun saw frontline service during a number of conflicts during the 1950s including with Belgian forces sent to suppress pro-independence forces in Congo and during the Suez Crisis Egyptian forces employed the rifle against a joint Israeli, British and French invasion force. The gun was a stalwart design, but it became obsolete by the end of the 1950s and was superseded by more modern automatic rifles during the 1960s. The gun has earned a reputation as the last true pre-modern firearm.

This particular specimen is a Egyptian contract FN-49 which was supplied to the nation sometime between 1948-1952. Egypt had secured nominal independence from Britain in the 1920s with a Monarchy left in power, but the country was still heavily influenced by London. The country was still a monarchy when after WWII it placed a massive order for FN-49 rifles from the Belgium based arms company Fabrique Nationale. The rifles supplied by FN to Cairo had a distinct marking on the chamber ring indicating they were supplied when the monarchy was still in power. The geopolitical situation took a massive turn when in 1952 a group of Egyptian military officers launched a coup against the monarchy and declared Egypt a Republic, largely putting an end to British influence in the country.

Following a power struggle, a young military officer, Gamal Abdel Nasser, assumed power and began to align the nation with the Soviet Union, although the British still had leverage in Egypt, including control over the strategically vital Suez Canal. In 1956 Nasser nationalized the Suez Canal, which ultimately resulted in a joint British, French and Israeli invasion of Egypt. The Egyptian Army was armed with an odd assortment of Soviet and Western arms including the FN-49, but the invading forces were simply better equipped and the Egyptian Army began to crumble. The Soviet Union ultimately threatened to intervene, with nuclear weapons if necessary, to prevent the destruction of Egypt and to the surprise of the British led invasion force American President Dwight Eisenhower refused to challenge the Soviets which resulted in a political defeat for the British and French. As a result, British Prime Minister Anthony Eden was forced to step down in humiliation. Conversely, Israel annexed the Sinai Peninsula and gained several other strategic objectives at the expense of Egypt, actions which laid the seed for future conflict between the two powers. This conflict saw the most widespread use of Egyptian FN49 Rifles, the rifle had been superseded when Egypt began to engage in large scale hostilities again in the ensuing decade.

This particular specimen is an Egyptian contract FN-49 which was made by Fabrique Nationale. It was supplied to Egypt sometime between 1948-1952. The rifle’s stock appears to be a replacement with no visible Egyptian markings and a aftermarket butt-plate, and some of the parts are not matching (see the markings section for details). Despite everything, the rifle remains a solid option. Good luck on your bid!