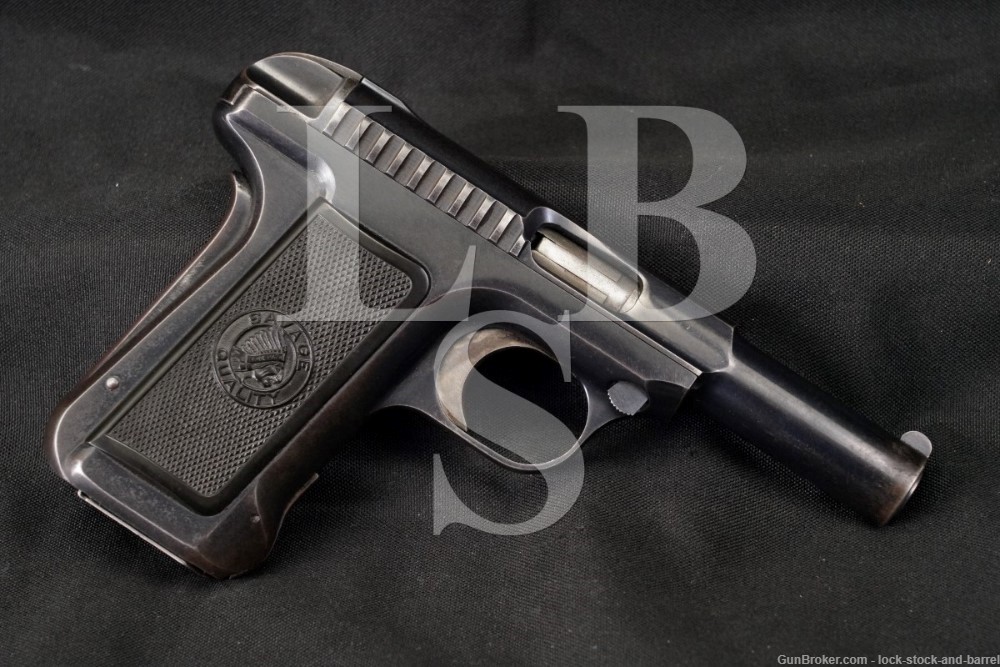 Stock Configuration & Condition: The grips are black checkered hard rubber with the “Savage Quality” Indian Head logo on each side. The grips have minor handling wear with a few scattered light marks in the smooth borders and infrequent light wear in the checkering. There is a small loss in the rear edge of the left panel at the location of the safety lever when the safety is not engaged. There are no cracks. The checkering is well defined. The grips rate in Very Good-Fine overall condition.

Overall Condition: This handgun retains about 90% of its metal finish. The finish is thinning at all edges. Most of the balance is in fairly evenly scattered minor surface oxidation. There is a little more notable oxidation at the muzzle-end of the slide. There are a few light nicks, scuffs and scratches. The action shows light operational wear. The markings are clear. Overall, this handgun rates in Very Good condition.

Mechanics: The action functions correctly. It has a frame mounted safety and a grip safety. The slide locks to the rear on an empty magazine and there is a slide release on the right of the frame at the front of the trigger guard. The slide has minor play to the frame. We did not fire this handgun. As with all used firearms, a thorough cleaning may be necessary to meet your maintenance standards.

Box, Paperwork & Accessories: This pistol comes with a 10 round double stack blued magazine. The magazine follower is correct for the 1915 model with a flange to engage the slide stop.

Our Assessment: This Savage Model 1915 pistol is very similar to the original Model 1907 except that it does not have a cocking piece, having been replaced with a shroud. The Model 1915 was made in both .32 ACP and .380 ACP, with the .32 ACP version made from 1915-1916 and the .380 ACP version made from 1915-1917. Only about 6,500 of the .32 ACP version were made, and like the Model 1907 uses no screws – even the grips snap on. The design of the Model 1907 and 1915 pistols was based on the .45 Caliber pistol Savage submitted to the 1906-1911 Army trials. The Model 1907 was one of the first pistols to use a double-stack magazine and it is its subsequent variants were advertised with the slogan “Ten Shots Quick!”. In addition to the shrouded cocking piece, the Model 1915 is distinguished by a grip safety as well as a slide stop mechanism with a slide release lever on the right of the frame. Despite the obvious increase in production cost, the 1915 was offered at the same price as the 1907, so it should come as no surprise that the 1915 was dropped following the outbreak of WWI when Savage’s production capacity was desperately needed for other arms.

This example is a .32 in Very Good condition with about 90% of its original finish remaining. The bore and mechanics are still quite strong, especially given the pistol’s age. This is a cute little pistol that certainly isn’t “just another Browning copy”. As the Savage pistols become more popular with collectors, the scarce Model 1915s are sure to gain even more in value. This is a nice example that will add to a collection, but may also prove to be a fun shooter for the lucky winner. Please see our photos and good luck!