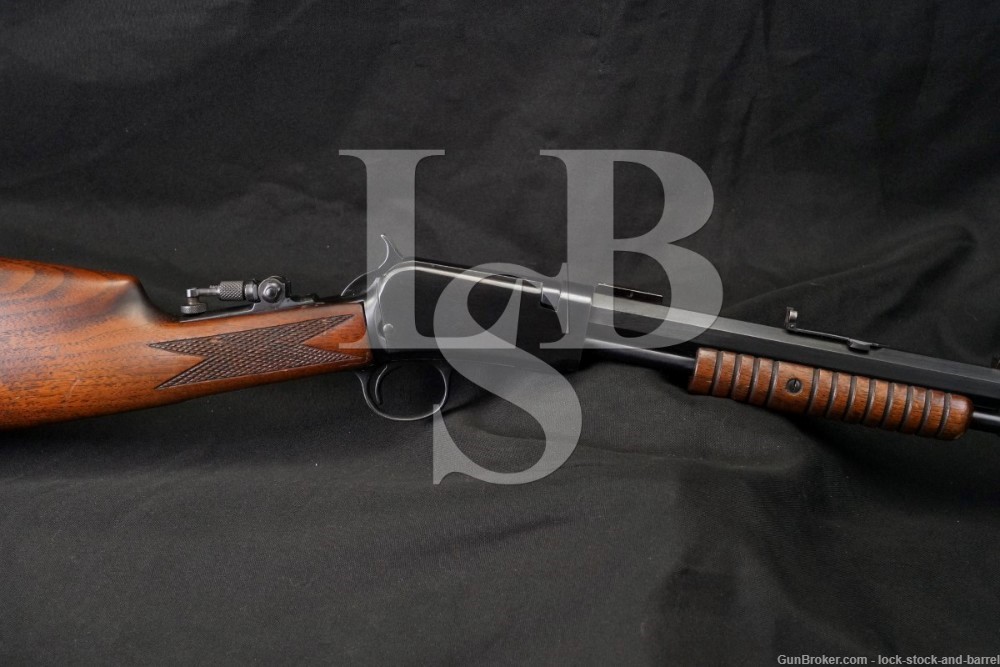 Year of Manufacture: 1933-1941 (after 1932, Winchester’s serial application on Models 90 was not sequential and large blocks of serial numbers were skipped)

Stock Configuration & Condition: The stocks are two-piece walnut with ribbed forend, checkered straight grip, straight comb and black hard rubber buttplate. The forend has a few light nicks and compressions. The buttstock has scattered nicks, scuffs and scratches. There is a patch of fill-in repair on the belly. There are no chips or cracks. The LOP measures 13 1/2″ from the front of the trigger to the back of the buttplate. The plate has gone to a light-moderate scuffing on the surface, primarily at the heel. Overall, the stocks are in Very Good condition.

Overall Condition: This rifle retains about 98% of its metal finish. There is some light wear on the receiver and barrel but no notable damage. The screw heads are well defined. The markings are clear. Overall, this rifle is in Very Good Plus condition.

Our Assessment: The Winchester Model 1890 pump action rifle was designed by John Browning in the late 1880’s, patented in 1888 and renamed the Model 90 in about 1919. Winchester had asked Browning to design the rifle as a replacement for the rimfire versions of the Model 1873, which had never achieved great popularity. It proved to be the most successful repeating rimfire rifle for general all around shooting ever made by Winchester. Approximately 764,000 Model 1890 rifles were produced between 1890 and 1942, after which the Model 1890 was replaced by the Model 62. For many years, the Model 1890 was considered to be the standard for use in shooting galleries, hence its nickname of “gallery gun”. This Model 90 rifle was made in 1933-1941 after the model name changed, with a 24″ octagon barrel and a straight grip stock with a black buttplate. The rifle is chambered in .22 Long Rifle. This rifle is in about Very Good condition with wear consistent with use over the last 80-some years, a nice bore and strong mechanics. This would make for a nice plinker or an addition to a Winchester collection. Please see our photos and good luck in your bidding!