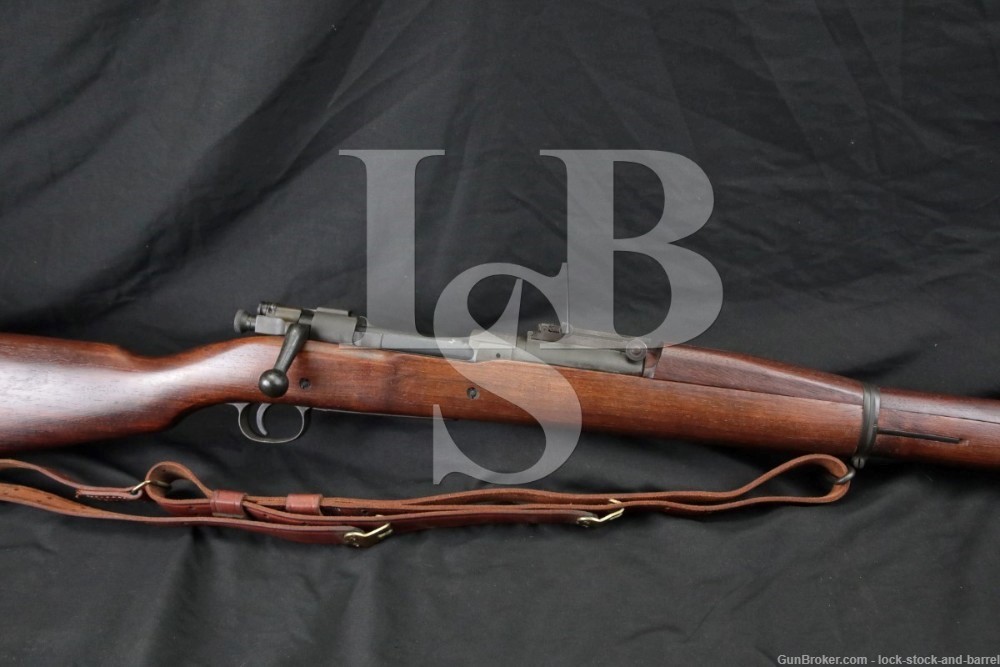 Markings: The top of the receiver is marked “U.S. / REMINGTON / MODEL 1903 / 3034642”. The top of the Springfield replacment barrel is marked “S A / flaming bomb / 7 – 42” and the bottom is marked “P”. The safety is marked “SAFE READY” and the magazine cutoff is marked “ON OFF”. The bottom of the bolt handle is marked “R” for Remington. The barrel band is marked “U”. The bayonet lug is marked “H”. The left side of the stock has been restamped with a Raritan Arsenal Rebuild stamp “RA-P”, above the trigger.

Sights / Optics: The front sight is a pinned blade atop a raised barrel mounted base. The rear sight is a “U” notched blade attached to a fully adjustable sight ladder marked from “3-27”. When flipped up separate notches and an aperture on the ladder can be used for sighting.

Stock Configuration & Condition: The two piece hardwood stock has a pistol grip, nosecap with bayonet lug, barrel band, stacking loop, 2 sling loops, 2 through bolts and a metal buttplate with hinged door for storage. The buttplate shows scrapes, scratches and discoloration from oxidation. The right rear of the buttplate is missing a piece of edge wood next to the buttplate. The top of the hanguardd shows light tooling marks ahead of the barrel band. The wood shows scattered scrapes and scratches. The wood has been oiled. The LOP measures 13 inches from the front of the trigger to the back of the buttplate. The stock rates in about Very Good Plus to Fine overall condition.

Bore Condition: The muzzle and grooves are semi bright. The rifling is deep. There is fouling in the grooves which should clean up some. There is light erosion in the grooves near the muzzle. The bore shows an M.E. of 1.

Overall Condition: This rifle retains about 96% of its metal finish as refinished. The metal shows scuff, scrapes and a few scratches. The front sight band and bottom metal shows discoloration. The receiver and bolt show operational wear. The screw heads show use. The markings are deep. Overall, this rifle rates in about Very Good Plus to Fine condition as refinished.

This Remington Model 1903 was made during WWII. It has since been rebuilt and refinished so it looks great for an 80 year old military rifle. The rifle still has clear Remington markings on the receiver as well as Springfield markings on the barrel. This Remington 1903 will add to your WWII or Military collection. Good luck.