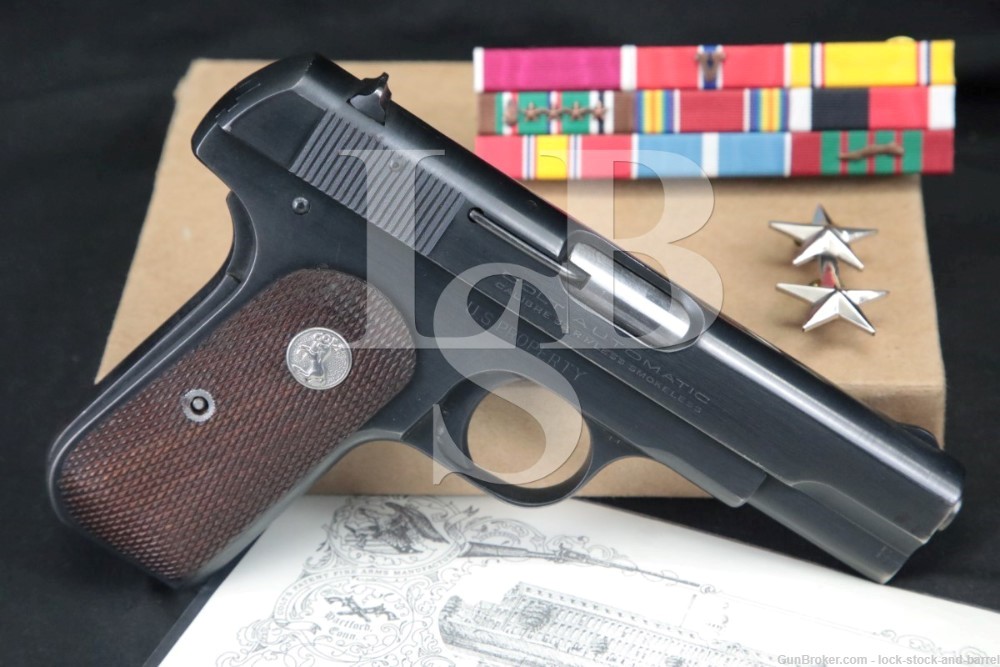 Sights / Optics: The front sight is a short blade fixed to the top of the slide with a serrated, ramped rear face. The rear sight is a square notch dovetailed into the rear of the slide.

Stock Configuration & Condition: The grips are checkered walnut with silver-colored Rampant Colt medallions at the tops of the grips. The grips show minor handling wear with a few scattered light marks. The checkering is well defined. There are no chips or cracks. Overall, the grips are in about Fine condition.

Finish Originality: Refinished. Given that the gun originally shipped in 1944 but was issued to Brigadier General E.C. Dunn in 1961, it is possible that the finish is Arsenal applied, but it may have been refinished after General Dunn retired.

Overall Condition: This handgun retains about 93% of its current metal finish. The finish is thinning at all edges. There is some minor erosion in the grip safety. There are infrequent light nicks and scratches with scattered minor scuffing. The action shows operational wear. The screw head is tool marked with a strong slot. The markings are generally clear, the Ordnance wheel is shallow and incomplete, as is common. Overall, this pistol is in Very Good-plus condition as refinished.

Mechanics: The action functions correctly. The slide has minor play to the frame. It has a grip safety, a manual safety and a magazine disconnect. The safety is designed to be used to lock the slide back or forward. We did not fire this handgun. As with all used firearms, a thorough cleaning may be necessary to meet your maintenance standards.

Box, Paperwork & Accessories: This pistol comes in a two-piece cardboard Kraft box with a single 8-round magazine. A series of documentation is included about the pistol and its previous owner. A Colt Archive letter is included which states that this pistol shipped to Springfield Armory on December 30, 1944 as one of 1,583 guns of the same type in the shipment. A Springfield Research Service letter is included which states that this pistol was issued to Brigadier General E.C. Dunn on October 27, 1961. A series of documents detailing General Dunn’s service is included along with both paper photos and CDs with digital photos from the National Archives. A ribbon stack and two General stars are included, as well.

Our Assessment: The Colt Model 1903 Pocket Hammerless is a semi-automatic pistol designed by John Browning, and was the 1st of the Colt concealed hammer models, followed by the 1908. Despite the title ‘Hammerless’, the M1903 and M1908 pistols do have a hammer, which is covered and hidden from view under the rear of the slide. This allowed the weapon to be carried in and withdrawn from a pocket quickly and smoothly without snagging. These pistols were popular civilian firearms for much of their life, and also served as United States General Officer pistols from the 1940s until their replacement by the M15 General Officers pistol in the 1970s.

This example was originally shipped to Springfield Armory in December of 1944 and Springfield’s records indicate that it was issued to Brigadier General Edward C. Dunn on October 27, 1961. This was an inauspicious date, on that day US diplomat Albert Helmsing approached the American/Soviet border in Berlin and an armed standoff began. At the time, General Dunn was the Chief of Staff of III Corps at Fort Hood, Texas which had been recently reactivated amid the heightened tensions of the early Cold War. By 1965, Dunn had been promoted to Major General and became the Chief of Staff for the Fourth U.S. Army, headquartered at Fort Sam Houston in San Antonio, TX.

In addition to service in Korea and Vietnam, Dunn also had a significant role in Operation Overlord as a Lt. Colonel. Off the coast of Normandy near Utah beach are the St. Marcouf islands. Allied intelligence believed that German forces had observations or control posts on the islands, likely in a bastion constructed on the larger island by Napoleon III. While paratroopers had landed the night before into the early morning, the 4th Cavalry detachment led by Dunn were the first troops to actually land during Operation Overlord. The detachment found that the islands had been mined, but did not find the expected German forces. Having ensured that the islands would not be used to give away the impending invasion, the beach landings would then commence.

This pistol is in Very Good-plus overall condition as refinished with 93% of its new blued finish remaining. This model is highly collected and should be of interest to the Colt connoisseur or the US Military arms collector, adding to even the most advanced collections with its documented history. Even better, and a rare find even among collections focused on General Officers’ pistols, a photo is included of General Dunn with the pistol at his side! Please see our photos and good luck!