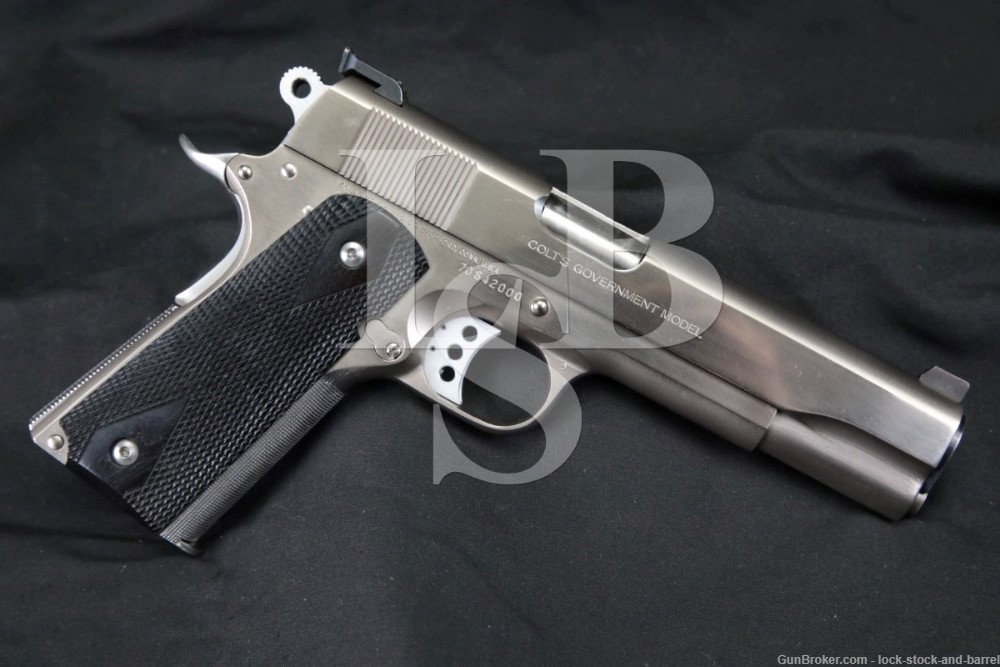 Sights/ Optics: The front sight is a blade fixed to the slide at the front. The rear sight is a square notch with white dots to each side of the notch, dovetailed and screw-set to the rear of the slide. The sights are not original to the gun.

Stock Configuration & Condition/ Grip: The grips are two-piece black painted checkered wood with smooth diamonds around the grip screws. The grips have minor handling wear with a couple of notable nicks in the left panel. The checkering is generally well defined. There are no chips or cracks. Overall, the grips are in Very Good-plus condition as not original to the gun.

Bore Condition: The bore is mostly bright and the rifling is sharp. There is no erosion in the bore, but there is some stubborn copper fouling.

Overall Condition: The pistol retains about 80% of its finish. The balance is mostly in the fronstrap which has been checkered and left in the white. There is a light “idiot mark” under the slide stop on the left of the frame. There are some scattered minor nicks, scuffs and scratches. The action shows light operational wear. The screw heads have strong sockets. The markings range from clear to shallow and incomplete. Overall, this pistol is in Very Good condition as customized.

Mechanics: The action functions correctly. We did not fire this pistol. As with all used firearms, it may need a thorough cleaning to meet your maintenance standards.

Box Paperwork and Accessories: One 9-round Colt magazine is included.

Our Assessment: Colt’s 1911 served the United States military through two World Wars and several other conflicts, is still in use by some units today, and has become popular with law enforcement, competitors, and recreational shooters across the nation. The design has seen some updates including a firing-pin block safety, higher profile sights, and more ergonomic grips, but the basic design and fantastic trigger remain the same after more than a century. Due to its popularity and long life, the 1911 has also been a popular choice for custom pistols, with a wide variety of sights, barrels, parts, and popular modifications. This example is a Commercial Government Model made in 1981, chambered for .38 Super. The descendent of the original Model of 1911, it has updates of the 1911-A1 as well as a collet-style bushing to improve accuracy. This one has also been customized with a skeletonized trigger, full-length guide-rod, beavertail grip safety, Commander-style hammer, checkered mainspring housing and frontstrap, as well as new sights and grips. The result is a custom 1911 that is a nice balance of capacity, power and appearance. Please see our photos and good luck!