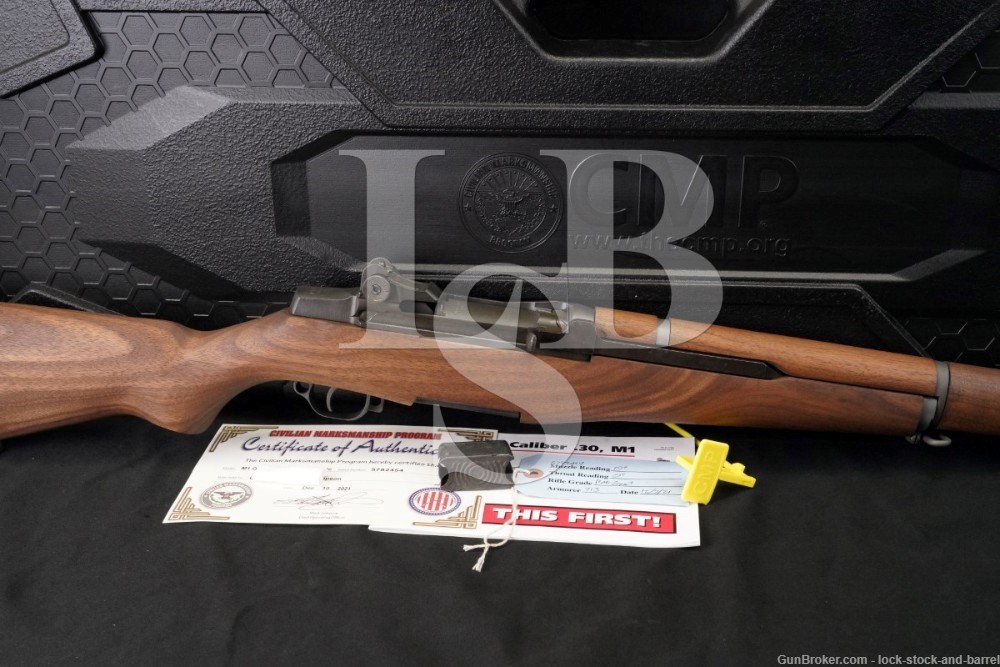 Model: M1 Garand .308 Expert Grade. An M1 Garand Rebuilt and rechambered in .308. The conversion was done by the Civilian Marksmanship Program (CMP).

Stock Configuration & Condition:  The left side of the new production hardwood stock is marked with “boxed” a CMP cartouche containing “CMP / eagle holding arrows”. The interior of the forearm is stamped “APRIL 24 2018”.
The hardwood stock has a pistol grip, metal nose caps, a stacking loop, two sling loops and a metal buttplate with hinged door for storage in the butt. The buttplate shows light scrapes. The right side of the stock shows a vertical scratch to the rear of the sling loop. The wood shows a few small scrapes & handling marks. The LOP measures 13 1/4 inches from the front of the trigger to the back of the buttplate. The stock rates in about Fine Plus overall condition.

Overall Condition: The gas tube has been refinished in gun paint. This rifle retains about 90% of its metal finish. The metal shows scrapes, a few small scratches and areas of discoloration. The op rod shows surface erosion and discoloration from oxidation. Surface erosion shows through the new finish on the bottom rear of the receiver. The receiver and bolt show light operational wear. The markings are well defined. Overall, this rifle rates in about Very Good Plus to Fine condition.
The rifle would rate in higher condition if the op rod were replaced.

Box, Paperwork & Accessories:  The rifle and accessories come in a black plastic CMP hard case that is marked on both sides with “CMP / www.theCMP.org”, the CMP seal “stars / eagle holding arrows”, and with other information.
The rifle comes with an M1 Garand owner’s manual, CMP chamber flag, M1 Garand clip and a CMP Certificate of Authenticity. The certificate is marked with the rifle’s serial number and “M1 Garand .308 Expert Grade”.

This Harrington & Richardson M1 Garand was made back in 1954. It has since been completely rebuilt and refinished by the Civilian Marksmanship Program (CMP). The barrel and stock are new production parts. It is now an M1 Garand .308 Expert Grade. The Criterion barrel is chambered in .308 Winchester with a 1 in 10 twist rate. The rifle looks good and the bore is strong & bright. The rifle is in Very Good Plus to Fine condition, but would rate in higher condition if the op rod were replaced. This M1 Garand comes with a CMP Certificate of Authenticity and a CMP hard case. Good luck.