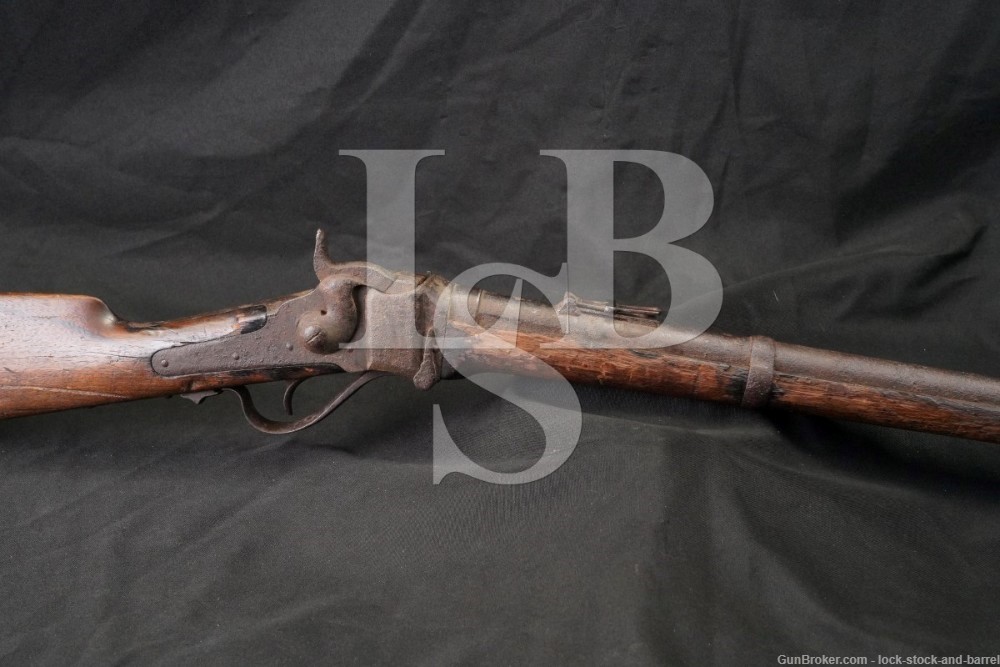 Sights/ Optics: The front sight is a brass blade fixed to a base by the muzzle and the rear sight is a ladder which presents a V-notch in the down position and when raised presents an upside-down V-notch slider.

Stock Configuration & Condition/ Grip: The stock is two-piece wood featuring a forend with a nose-cap, three barrel bands secured by springs and a retaining screw ahead of the receiver while the butt features a straight wrist, a straight comb and a semi-crescent butt-plate. The stock has scattered moderate handling marks, nicks and scuffs. Notably, there is a light crack on the left side behind the nose-cap, a moderate ding between the nose-cap and forward barrel band on the left side, light wear at the toe, moderate wear on the heel’s leading edges, several large moderate scratches on the right side of the butt, a light crack at the rear of the lock-plate and the wood is heavily worn on the right side of the forend. The LOP is 14” from the trigger to the rear of the butt-plate. The butt-plate is coated in erosion and moderate handling wear. Overall, the stock is in Fair-Good condition for an Antique.

Bore Condition: The bore is dark with mostly faded rifling. There is scattered moderate-heavy erosion in the bore.

Overall Condition: The rifle retains about 3% of its metal finish. There is some trace bluing visible on the barrel, but the majority of the gun is coated in erosion. There is scattered erosion and moderate pitting all over the rifle. There are also light-moderate handling marks, nicks and scuffs. The discernable markings are described above. The screwheads are coated in erosion but are serviceable. Overall, the rifle is in Fair condition for an Antique.

Mechanics: The bore is eroded and the gun is not safe to fire in its current conditio, despite this the action engages correctly. We have not fired this rifle. As with all used firearms, a thorough cleaning may be necessary to meet your maintenance requirements.

Our Assessment: The Sharps Model 1874 is actually a misnomer, the gun was actually introduced in 1871 and remained in production into the 1880s. This particular specimen is a “Model 1874” that was made between 1871-1873 (the markings changed in 1874 when the management of the company was shaken up). The gun appears to be a military rifle variant of the m/1874 which is chambered for .50-70 Govt rounds. The gun is worn, with wear on the stock and erosion on all the metal parts, despite this the gun has a functional action. This could make a fun restoration project, and still has an appeal to historical collectors. Good luck on your bid!