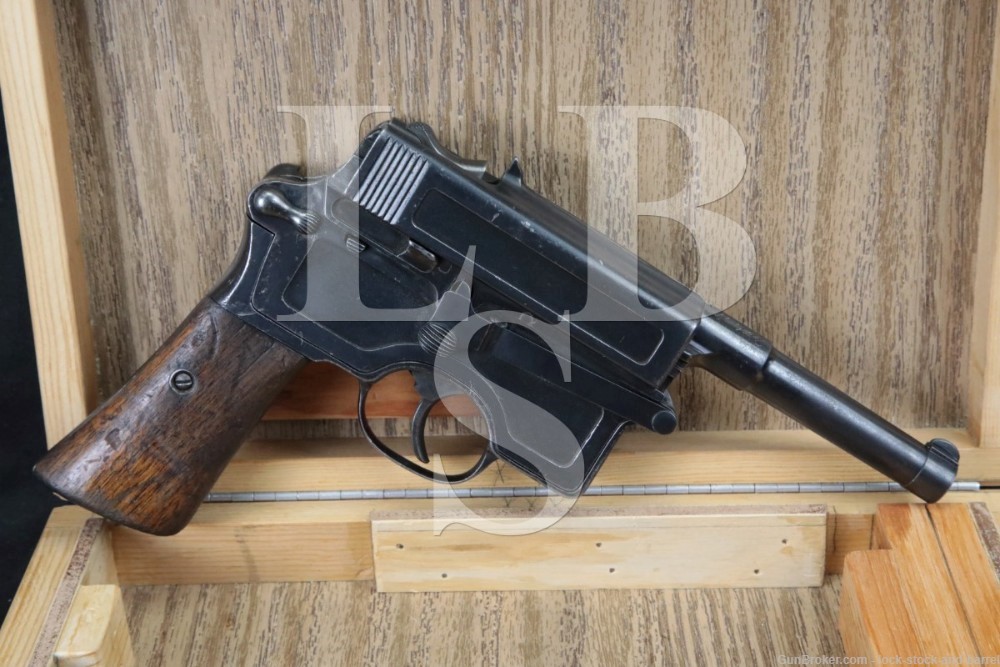 Markings: The chamber ring is marked “Vitali / Md.o 1910 / TERNI”. The concealed portion of the takedown screw is marked “6”.

Sights/Optics: There is a banded blade fixed by the muzzle. The rear sight is a fixed V-notch on the slide.

Stock Configuration and Condition: The grip panels are two-piece smooth wood. The grips have scattered light-moderate handling marks, nicks and compressions. Notably, there is a moderate crack at the center of the left panel that extends from the very top to bottom which appears to have been patch repaired with an adhesive. Overall, the grip panels are in Good condition.

Type of Finish: Blue with a Case Colored hammer

Overall Condition: The pistol retains about 75% of its metal finish. There are scattered light handling marks, nicks and scuffs. Notably, there is light wear along the leading edges and scattered patches of light surface oxidation. The markings remain clear. The screwhead is lightly tooled and remains serviceable. Overall, the gun is functionally in poor condition as there is no installed firing pin, but otherwise the gun is in Very Good condition.

Mechanics: The gun has no firing pin, otherwise the action functions correctly. We have not fired this pistol. As with all used firearms, a thorough cleaning may be necessary to meet your maintenance requirements.

Box, Paperwork, and Accessories: The gun comes with a wood box.

Our Assessment: The Royal Italian Army was seeking a replacement for the Bodeo Model 1889 service revolver at the turn of the 20th Century. While the Glisenti Model 1910, designed by Italian officer and weapon designer Abiel Bethel Revelli di Beaumont, was ultimately accepted for service, a number of other designs were submitted. One of the other designs that did not make it past the trial stage was the Vitali Model 1910. The gun was designed by another Italian officer and accomplished weapon designer, Giuseppe Vitali, who had worked on a number of weapon systems including the Vertelli-Vitali m/1870-87. The Vitali Model 1910 has an aesthetic similarity with the Glisenti, but it has a number of mechanical differences and is more similar to a Mauser C96 with a fixed magazine designed to be reloaded by stripper clips (the Glisenti had a detachable magazine) and an entirely different takedown system. We were unable to ascertain if the gun had any operational history, but it appears it never made it past the trial phase.

This particular Vitali Model 1910 has only two issues, most importantly it is missing its firing pin and the grips are a bit worn. Otherwise, the gun is well preserved with strong mechanics and a solid blue finish. This is a rare catch that will certainly make a worthy addition to any historical firearms collection. Good luck on your bid!