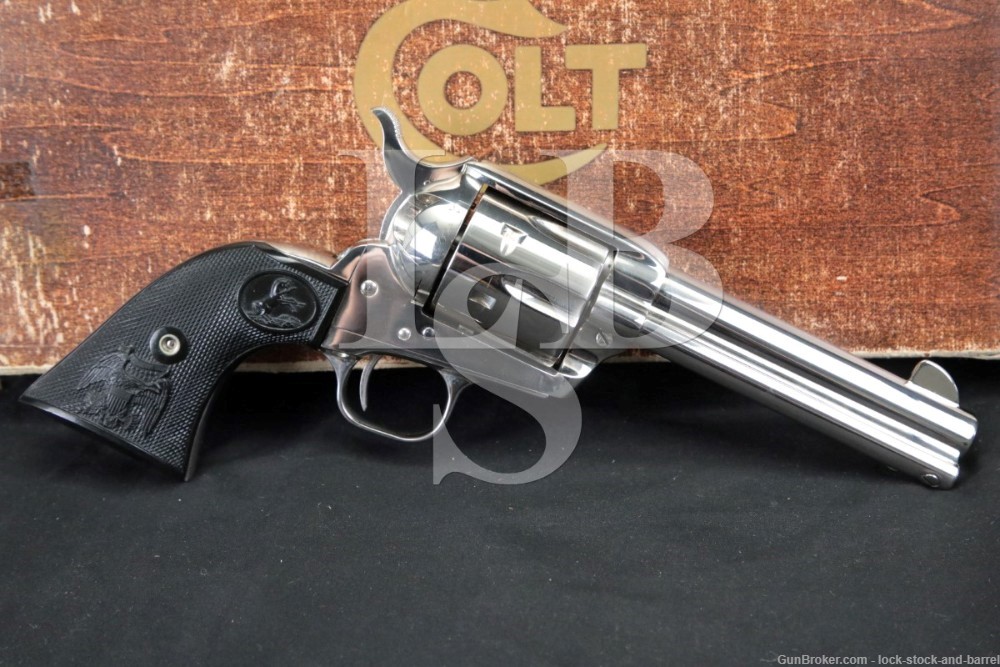 Stock Configuration and Condition: The installed grips are two-piece chekcered black synthetic panels with Colt ponies and American eagles mounted to a center synthetic piece which is concealed by the grip frame when assembled. The grips have some scattered minor nicks but are othereise free. There are no chips or cracks. Overall, the installed grips are in Very Good-plus condition.

Bore Condition: The bore is mostly bright and the rifling is very well defined. There is no erosion in the bore.

Overall Condition: This revolver retains about 98% of its metal finish. The finish is rather strong throughout. There are a few scattered marks, some scuffs, and tiny scratches, but all of this is minor. The cylinder has minor turn-wear, not through the finish. The screw heads range from sharp to lightly tool marked with strong slots. The markings are clear. Overall, this revolver is in Fine-plus condition.

Mechanics: The action functions correctly and smoothly. The lockup produces little play on all six chambers. The trigger is crisp. We did not fire this revolver. As with all used firearms, a thorough cleaning may be necessary to meet your maintenance standards.

Box, Paperwork, and Accessories: This revolver comes in a Blue plastic Colt case with serial-matching label, the original grips as described, and a manual.

Everyone should have a Colt Single Action Army, and this would be a beauty to add to any collection. Manufactured in 1997, this revolver has a beautiful nickel finish with a 4 3/4″ barrel and chambered for the original .45 Colt cartridge. In Fine-plus condition, it appears to have seen very seldom use. The gun is more than suitable for addition to a collection, but it would also make an attractive “BBQ Gun” or could be used in Cowboy Action Shooting competitions. Please see our photos and good luck!