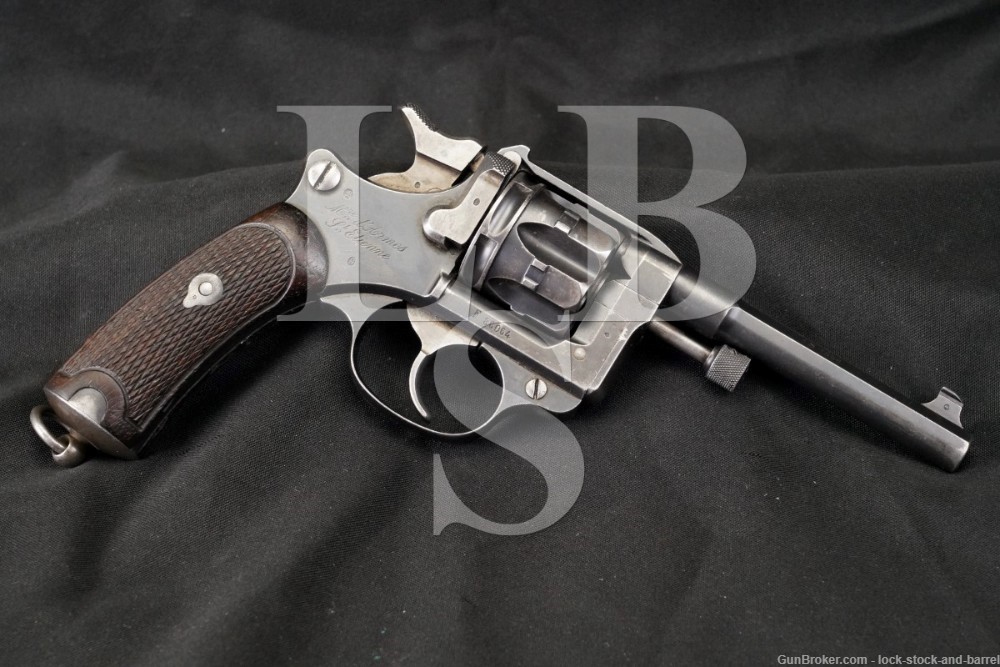 Sights/ Optics: The front sight is a blade pinned to a fixed base by the muzzle. The rear sight is a fixed V-notch at the rear of the top-strap.

Stock Configuration & Condition/ Grip: The grip panels are two-piece checkered wood with smooth borders. The grips have light handling marks, nicks and scuffs. Notably, there is scattered silver colored fouling concentrated at the front of the left panel. The checkering remains mostly sharp. Overall, the grip panels are in Very Good condition for Antiques.

Overall Condition: The revolver retains about 75% of its metal finish. There are some light handling marks, nicks and scuffs. Notably, there is light finish loss along the leading edges and some scattered patches of light surface oxidation. The markings remain clear. The screwheads are lightly tooled and remain serviceable. Overall, the revolver is in Very Good plus condition for an Antique.

Mechanics: The action functions correctly. The single-action trigger is crisp and double-action is smooth. The cylinder locks with light play on each chamber. We have not fired this revolver. As with all used firearms, a thorough cleaning may be necessary to meet your maintenance requirements.

Our Assessment: The French Revolver modèle 1892 is a French side-arm that has an impressive service history. The gun was an advanced design for its time and was chambered for 8mm French Ordnance rounds. The gun was the standard issue side-arm for the French Military when WWI broke out in 1914. Unfortunately, French industry could not meet the demand for m/1892 Revolvers placed upon it by the conflict, thus the older m/1873 Chamelot-Delvigne Revolver was brought out of retirement for front-line service. The m/1892 continued to see limited service following the end of the First World War and when Germany occupied France in WWII the Wehrmacht adopted a number of m/1892 Revolvers for service (redesignated the “Revolver 637(f)”). Small numbers are reported to have seen use in several colonial conflicts after WWII, including the French wars in Indochina and Algeria, but only in small numbers, the gun was largely relegated to use by French police by the 1950s before its retirement in the 1960s. As an aside, the gun is sometimes referred to as the “Lebel Revolver” but the famous French military officer and weapons designer is not believed to actually have been associated with the development of this gun.

This particular specimen is a Model 1892 that was manufactured at St. Etienne Arsenal in 1896. The gun has some light handling wear but its bluing remains impressive and the mechanics are solid. The gun is an impressive piece of military history that should appeal to historical firearms collectors. Good luck on your bid!