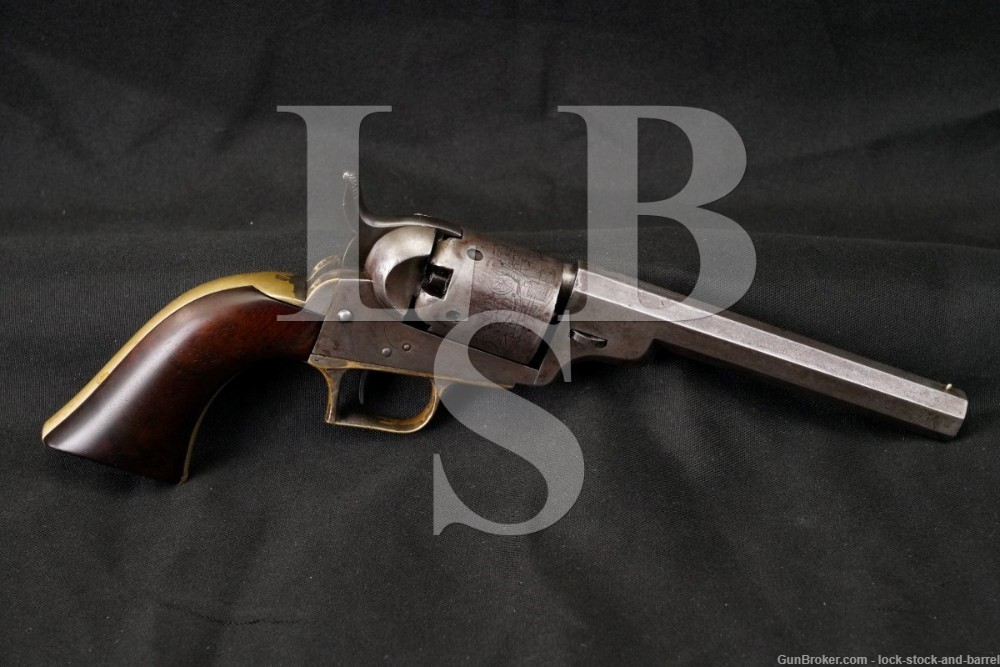 Markings: The top of the barrel is marked “ADDRESS SAML COLT / NEW-YORK CITY” with dashes to each side. The left of the frame is marked “COLT’S / PATENT”. The bottom of the barrel assembly, frame, trigger guard,  and backstrap are each marked “11417”. The arbor is marked “417”. The outside of the cylinder has a roll-engraved stagecoach scene and “COLTS PATENT / No 11417″. The backstrap inlet of the grip has had a fabric strip installed, obscuring whatever serial marking may have been present. The right of the trigger guard has “T” inspector’s mark, found again on the rear face of the barrel assembly. The bottom of the trigger guard has “K” inspector’s mark near the serial marking. There is no serial marking on the wedge.

Sights / Optics: The front sight is a brass post threaded to the barrel at the muzzle. The rear sight is a “V” notch at the front of the hammer, visible when cocked.

Stock Configuration & Condition: The grip is one-piece smooth walnut. The grip has light handling wear with some scattered small nicks and scratches. There are no chips or cracks. Overall, the grip is in Fine-plus condition as Antique.

Finish Originality: Original. The fit of the wedge and lack of a serial marking likely indicates that it is a replacement.

Bore Condition: The bore is mostly bright with sharp rifling. There is a little erosion at the muzzle, just in front of the forcing cone, and a patch of erosion in the top of the bore about mid-way.

Overall Condition: This revolver retains about 10% of its metal finish with some silver plate remaining on the grip frame. The steel parts have mostly worn to white or gone to a light patina. There is infrequent minor surface erosion and some scattered light nicks, scuffs and scratches. The action shows operational wear and there is wear on the rear face of the cylinder with the safety stud worn or sheared off. The screw heads range from sharp to tool marked with usable slots. The markings are generally clear, some are worn, but legible and there is fairly good detail in the stagecoach scene. Overall, this revolver is in about Very Good condition as Antique.

Mechanics: The hammer will occasionally have resistance to going to the full-cock position, this appears to be related to how firmly the wedge is seated. If the wedge is not seated firmly, it can fall out easily. Otherwise, the action functions correctly. The barrel has minor play to the frame. The cylinder locks up with little play on each chamber. We have not fired this revolver. As with all used firearms, a thorough cleaning may be necessary to meet your maintenance standards.

Our Assessment: Following the development of the Paterson revolver, the 1847 Walker and the subsequent Dragoon, Colt found there was a demand for a more concealable, and generally more convenient to carry, revolver. In late 1847, a diminutive .31 caliber pistol was developed, dubbed simply “Pocket Pistol”. While collectors today are familiar with a dizzying array of Colt revolver models, at the time they were only producing the Dragoon and the Pocket, so this model designation wasn’t too confusing to their customers. The introduction of the Pocket model was well timed as the Gold Rush would see a spike in demand so significant that while the guns were originally priced at $25, they would be sold for nearly $300 by the time they made it to the West coast.

While the larger Dragoon had a loading lever, this feature was omitted on the Pocket model for ease of carry and size considerations, instead having a concave end to the cylinder arbor, allowing it to be used as a ramrod when charging the cylinder, an interesting if not particularly expedient feature. The model saw significant variations, with this being a Type III which has oval cylinder stop cuts, a stagecoach scene on the cylinder and a 5″ barrel.

The revolver is in Very Good condition as Antique, retaining a little silver plate on the grip frame, fairly strong mechanics though the wedge is a replacement, and a surprisingly nice bore. Even better for the collector, this revolver comes from the collection of noted gun writer, NRA Field Editor and winner of the John T. Amber Literary Award, Rick Hacker. A copy of the article he wrote about the revolver in the January, 2022 edition of American Rifleman is included, which will make a great addition if you wish to display this revolver. While the later 1849 Pocket model would go on to sell more than 300,000 pieces, only around 15,000 of the “Baby Dragoon” models were produced, making this a great find for the Colt collector. Please see our photos and good luck!