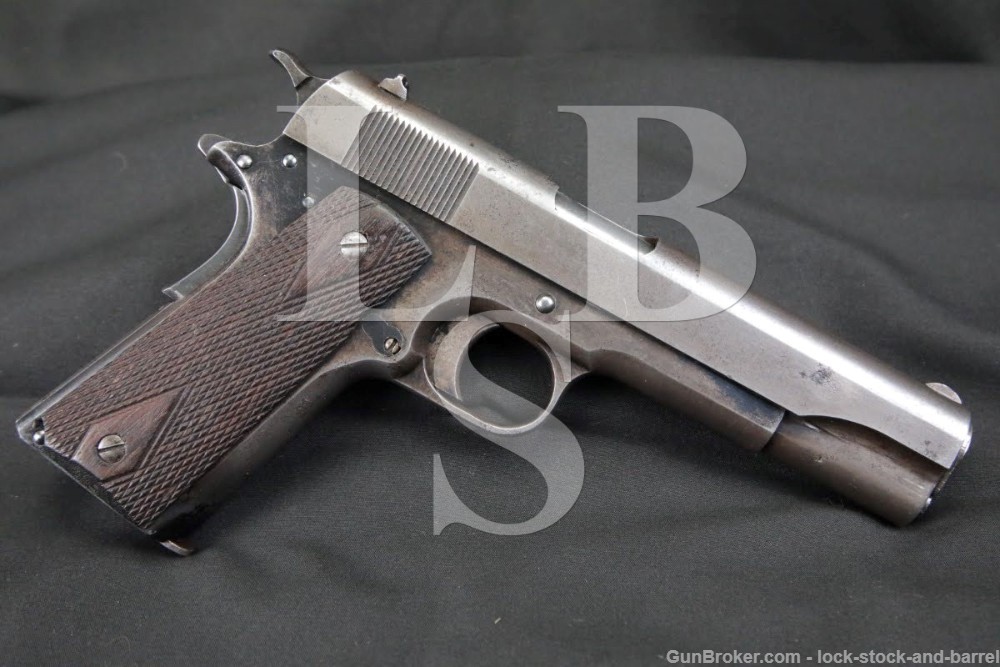 Stock Configuration & Condition: The grips are two-piece checkered walnut with smooth diamonds around the grip screw escutcheons. The grips show light handling wear with a patch of compressed checkers on the left panel below the top diamond. There is minor tool marking around the screw heads and some light nicks and scuffing. The checkering is generally well defined. There are no chips or cracks. Overall, the grips are in Very Good-Fine condition.

Bore Condition: The bore is gray with well defined rifling. There is scattered light erosion and some light pitting in the bore.

Overall Condition: This pistol retains about 30% of its metal finish. Most remaining finish is in protected areas such as around raised features and under the grips as well as on some controls. Other areas show wear and some discoloration from oxidation. There is some scattered surface erosion, most notable in the trigger guard and the top of the slide. The dust cover is bent in on the left-front corner and there is a matching line of wear on the left of the slide. There are some scattered light nicks and scratches including an “idiot mark” under the slide stop on the left of the slide. The screw heads range from sharp to lightly tool marked with strong slots. The markings are clear. Overall, this pistol is in Good condition.

Mechanics: The action functions correctly. It has both a manual and grip safety and the trigger pull is crisp. The slide has no play to the frame, taken up by the dent in the dust cover pushing on the slide. We did not fire this pistol. As with all used firearms, a thorough cleaning may be necessary to meet your maintenance standards.

Box, Paperwork & Accessories: This pistol comes with a single 7-round magazine with the top in the white. The magazine has operational wear, scattered minor surface oxidation, intact feed lips and a strong spring.

As would occur in the next World War, the demands of the U.S. war machine outstripped Colt’s ability to produce pistols and various other makers would supply Model 1911 pistols to the United States. These included Remington UMC and Springfield Armory, but there were also some companies who received contracts to produced pistols but never got around to delivering them. This is an interesting and exceptionally rare example which was produced in 1918 by North American Arms in Quebec, Canada. Due to wartime demand and complications with transportation, all new factory space or repurposing of factory space in New England had to be approved by the War Department, so the Ordnance Department began looking into other locations for production and settled on the Ross Rifle Company in Canada, though that company had recently closed. The North American Arms Company took over the factory and secured a contract to produce 500,000 1911 pistols. At the time, most of the Allied powers believed that the war would continue for at least a few more years. The German offensive Operation Michael had just been halted and the Second Battle of the Marne, the first successful Allied offensive, was just starting. No one would guess that the war would end less than 6 months later.

When the war ended, so did North American Arms Company’s contract with no deliveries actually made. In fact, only tool room prototypes and parts for approximately 100 pistols had been made by the time of the contract’s cancellation, making them one of the most rare wartime production, though not issued, 1911s. This example is one of those few North American Arms pistols. It has proper markings, or rather lack thereof, with only the manufacturer’s slide legend and serial markings on the slide, trigger and frame. The pistol is in Good condition, typical of most known examples. For the dedicated 1911 collector, this is a wonderful opportunity at an exceedingly rare and high condition piece. Please see our photos and good luck!