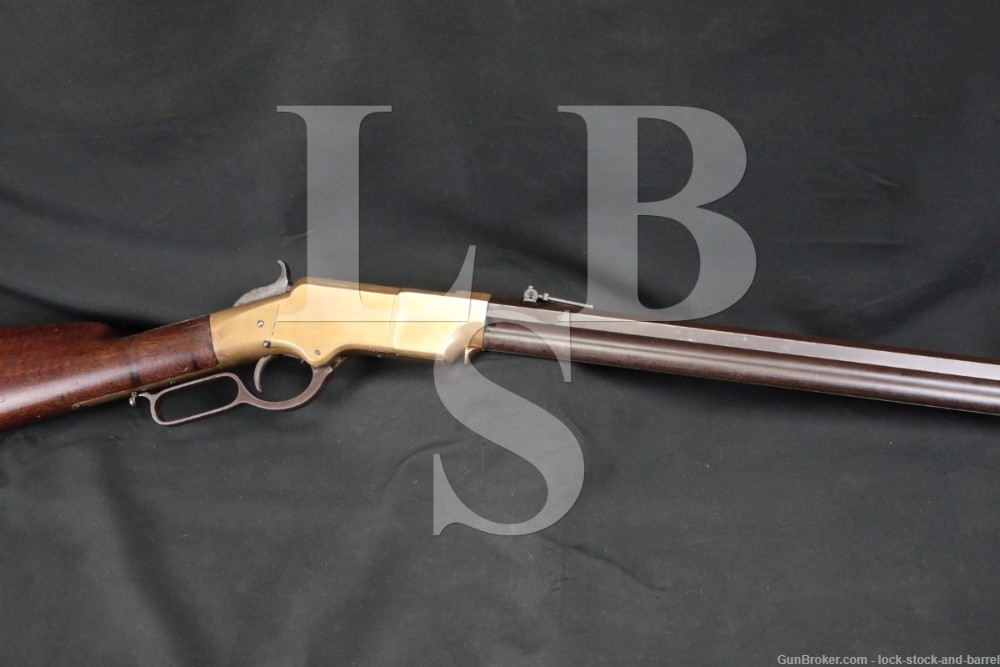 Markings: The top of the barrel is marked “HENRY’S PATENT OCT. 16, 1860 / MANUFACT’D BY THE NEW HAVEN ARMS CO. NEW HAVEN, CT.” and at the receiver with “7492”. The left side of the lower tang is marked “7492”, found again stamped on the inside of the buttplate at the toe and the top tang inlet of the stock.

Barrel Length: 24″ Nominal, 24 1/4″ Measured. The barrel is octagonal, round at the muzzle-end where the magazine sleeve is installed.

Stock Configuration & Condition: The stock is smooth walnut with a sling swivel mounted to a plate on the left side below the comb (there is a sling mount on the left of the barrel assembly between the magazine and barrel). The swivel rotates easily on its mounting plate and pivots properly on its stud. There is a Henry “bump” below the sling swivel, but it is worn. The buttplate is a second style brass crescent plate with a sharp point at the heel and a trapdoor over a storage compartment (there is nothing in the compartment). The stock has some scattered light nicks, scuffs and scratches with a few more notable dings. There is a small loss and a couple of short cracks at the toe. There is a defined circle of wear around the sling swivel. There are some very small losses around the edges of the wrist. The LOP measures 13 3/8″ from the front of the trigger to the back of the buttplate. The plate has light wear with scattered light nicks and some spots of discoloration. Overall, the stock is in about Very Good condition as Antique.

Finish Originality: The receiver’s tangs have been braze-repaired. Otherwise, the finish appears Original.

Bore Condition: The bore is gray. The rifling is well-defined. There is light-moderate erosion and pitting scattered through the bore.

Overall Condition: This rifle retains about 25% of its metal finish. There are some spots of blue along the grooves between the barrel and magazine. Otherwise, the barrel assembly has gone to a fairly uniform light patina with scattered minor surface erosion and some nicks and scratches. There are tool marks on the side flats of the barrel in the rear half. The receiver has scattered nicks, scuffs and scratches, most notable at the left-front and around the edges of the sideplates. There are braze-repairs at the front of each receiver tang and a couple of spots on the top tang which have a brighter coloring, possibly from drops of molten brass. The action shows operational wear. The screw heads range from sharp to disfigured with usable slots. The markings range from clear to worn, but legible. Overall, this rifle is in Good-Very Good condition as repaired Antique.

Mechanics: The barrel sleeve has some play to the barrel, stopped from rotating by the magazine spring. Otherwise, the action functions correctly. The hammer does not have a half-cock safety. We have not fired this rifle. As with all used firearms, a thorough cleaning may be necessary to meet your maintenance standards.

Our Assessment: The Henry rifle was designed in 1860 and held 16 brass cartridges in its magazine. Sources aren’t clear about when it actually began production, but by 1866 it ceased production with about 14,000 having been manufactured. At that time, New Haven Arms became Winchester Repeating Arms Company and the Henry evolved into the M1866 Winchester. A few thousand Henry Rifles were purchased by the Union during the Civil War and many more were privately purchased by Union soldiers. The rifle quickly became known as the “rifle that you could load on Sunday and shoot all week long”. We can’t imagine what it must have been like for the Confederate troops to have faced these rapid firing rifles armed with only their muzzleloaders, but because the Henry wasn’t purchased in large numbers by the Union, there were only a few Civil War battles where the Henry played a decisive role, one of which was the Battle of Franklin. Unfortunately for Custer and his Springfield Trapdoor armed troops, a few Henry rifles also fell into the possession of the Sioux and Cheyenne troops at the Battle of the Little Big Horn in 1876.

This rifle was made in 1864, toward the end of the Civil War. The serialized parts match, however the tangs appear to have cracked or broken off entirely at some point, having been brazed back in place. The rifle has surprisingly strong mechanics for such an old gun, though the barrel sleeve is slightly loose and rotates a little bit, stopped by the magazine spring. Overall, this rifle shows honest wear considering its age and likely uses. Any Henry will make a great addition to a collection of lever action rifles, Winchesters, or early repeating cartridge firearms, and we’re sure this one will be no exception. Please see our photos and good luck!