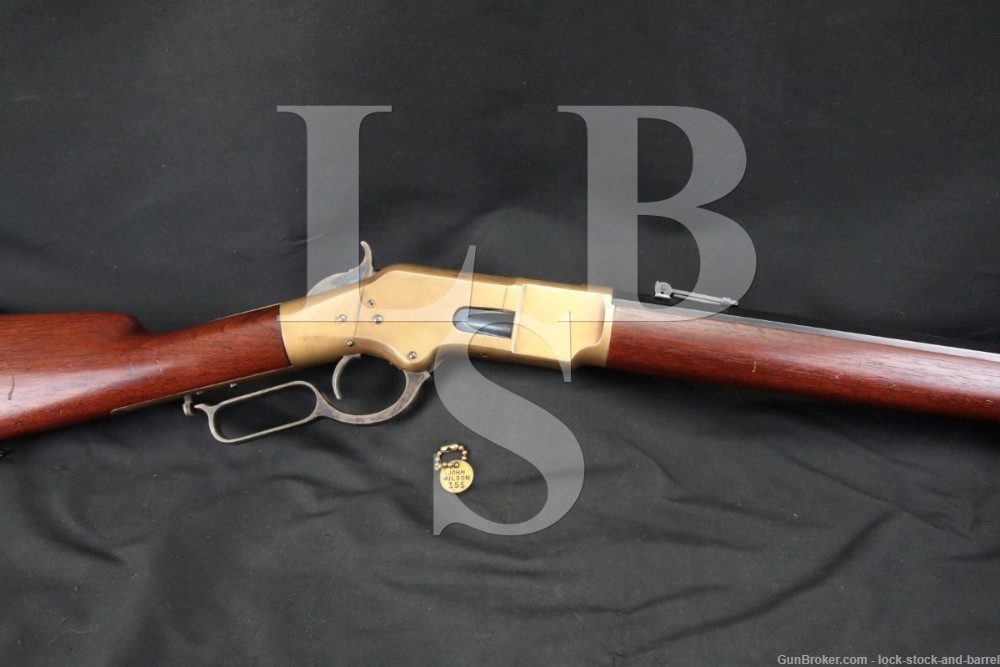 Sights / Optics: The front sight is a german silver blade in a slotted base dovetailed to the barrel at the front. The rear sight is a folding ladder-style sight, presenting a “V”-notch when folded down and with a “V”-notched slider on the ladder which is graduated from 200 to 900 yards in 100 yard increments.

Stock Configuration & Condition: The stocks are two-piece smooth walnut with a brass capped forend, straight comb, straight grip and brass crescent buttplate with a sliding door over a storage compartment (there is a four-piece cleaning rod in the compartment). There is a sling plate with swivel mounted in the belly and a sling swivel mounted to the bottom of the nosecap. The stocks have some scattered light nicks, scuffs and scratches with a few more notable dings in the belly near the toe. There are no chips or cracks. The LOP measures 13 1/2″ from the front of the trigger to the back of the buttplate. The plate has mostly gone to a light patina with scattered light wear. Overall, the stocks are in Fine-plus condition as restored Antique.

Finish Originality: This rifle has been professionally restored. Per our consignor, this rifle was restored by Roger Kurtz of Roger’s Restorations.

Bore Condition: The bore is mostly bright. The rifling is sharp. There is infrequent minor erosion in the bore along the edges of the grooves.

Overall Condition: This rifle retains about 92% of its metal finish. The barrel and magazine tube have strong finish with edge-thinning and light handling marks. The receiver has mostly gone to a light mustard patina with some scattered spots of darker discoloration. There are some scattered light nicks and scuffs on the receiver as well as on the bottom of the lifter. The lever, hammer and trigger have strong case color. The screw heads range from sharp to lightly tool marked with strong slots. The markings are clear. Overall, this rifle rates in Excellent condition as restored Antique.

Mechanics: The action functions correctly. The hammer does not have a half-cock safety. We have not fired this rifle. As with all used firearms, a thorough cleaning may be necessary to meet your maintenance standards.

Box, Paperwork & Accessories: This rifle comes with a four-piece cleaning rod stored in the buttstock.

This is a Model 1866 2nd Model Rifle chambered for the .44 Henry Rimfire. It has a 24″ octagonal barrel with a great bore and is inscribed on the left sideplate for a John J. Bird of Blakely, Georgia. We were able to find record of a grave site for a John J. Bird (1828-1876) at a Blakely cemetery, but we were not able to find any additional information about Mr. Bird. This rifle has been quite expertly restored, by none other than Roger Kurtz of Roger’s Restorations according to our consignor.

Truly an artist, Roger is known for restorations which do not make a rifle look as if it is brand-new, but rather to make the rifle appear as an extraordinarily high-condition original. He has been so successful at this that he began placing an unobtrusive marking on concealed surfaces of the guns he restores, to prevent unscrupulous characters from passing off his work as a genuine original Winchester, which it easily could! This rifle is either not so marked or is marked on a surface covered by the forend, which we did not remove, but the work is classic Roger’s.

Most Winchester collectors would never think that their collection was complete without at least all three variations of the M1866, while some would argue for all of the variations of the four different models. This inscribed 1866 2nd Model Rifle will be a gorgeous addition to any collection. Please see our photos and good luck!