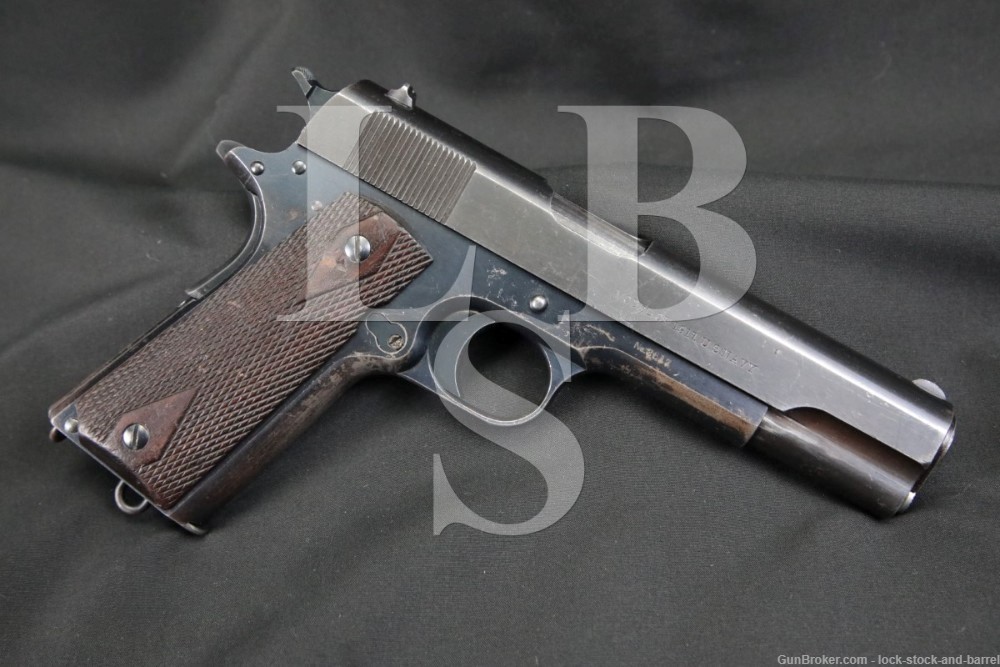 Sights / Optics: The front sight is a rounded blade. The rear sight is a “U” notch dovetailed into the slide.

Stock Configuration & Condition: The grips are checkered walnut with smooth diamonds around the grip screws. The right panel has a notable ding below the top mounting screw. Otherwise, the grips show generally light handling wear with some more minor nicks and scuffs. The checkering is generally well defined with some wear at the bottom edges and one patch of a few damaged checkers near the front of the left panel. There are no chips or cracks. Overall, the grips are in Very Good condition.

Finish Originality: The finish is Original to the parts. The slide is a later production Navy slide and the barrel is a replacement Springfield Armory barrel.

Bore Condition: The lands are semi-bright, the grooves are gray. The rifling is well defined, sharp where not interrupted by erosion. There is scattered light erosion and infrequent minor pitting in the bore, mostly in the grooves.

Overall Condition: This pistol retains about 60% of its metal finish. The finish is thinning at all edges. The slide shows fairly even wear and muting in its finish while the frame’s finish is brighter and stronger. There is handling wear in the grip areas and some scattered minor oxidation with infrequent minor surface erosion. There are scattered light nicks, scuffs and scratches including a scratch on the left of the frame under the slide stop. The action shows operational wear. The screw heads range from sharp to tool marked with strong slots. The markings are clear. Overall, this pistol is in Very Good condition as assembled.

Mechanics: The action functions correctly. The trigger pull is crisp and the slide is tight on the frame. The slide to frame fit gets notable tighter when the slide reaches the fully forward position. We have not fired this pistol. As with all used firearms, a thorough cleaning may be necessary to meet your maintenance standards.

Box, Paperwork & Accessories: This pistol comes with one blued two-tone magazine with a lanyard ring on the bottom, body which comes down flush with the bottom edge of the floorplate, and a “keyhole” punch and saw-cut in the spine at the top. The magazine shows light operational wear with intact feed lips and a strong spring.

The U.S. Navy contract pistols with the early U.S. Navy marked slides and early style small lettering and serial numbers are probably one of the most difficult of the standard issue Model 1911s to acquire. There was a total of approximately 15,037 of these early style, U.S. Navy marked slides produced in total and this was changed (to standard U.S. Army markings) after 1915 as the Army, who was the Ordnance proponent for service pistols, wanted standard markings and serial number placement throughout the Model 1911 production.  So, their survival rate in original unaltered condition is extremely low, since they were in service for the next 80 years.

This is a Colt Model 1911 that was made in the first year of production, 1912, and was one of 3rd lot ever shipped to the Navy. The pistol has been equipped with a later production, though still Navy marked slide as well as a replacement Springfield barrel, possibly part of an arsenal refurbishment/overhaul or simply a “camp-fire swap”. The pistol does retain other early features such as a mainspring housing pin which is convex on each end, long-foot guide-rod and an early dimpled magazine catch retainer, though it has had a slot cut in it as most of the early dimpled retainers did. The pistol is in Very Good condition with 60% of its blue metal finish remaining. This is a neat early Colt 1911, and the Navy marked pistols were among the rarest. In addition, the early keyhole magazine is quite collectable. This pistol is destined for a high-end Colt or U.S. small arms collection. Please see our photos and good luck!