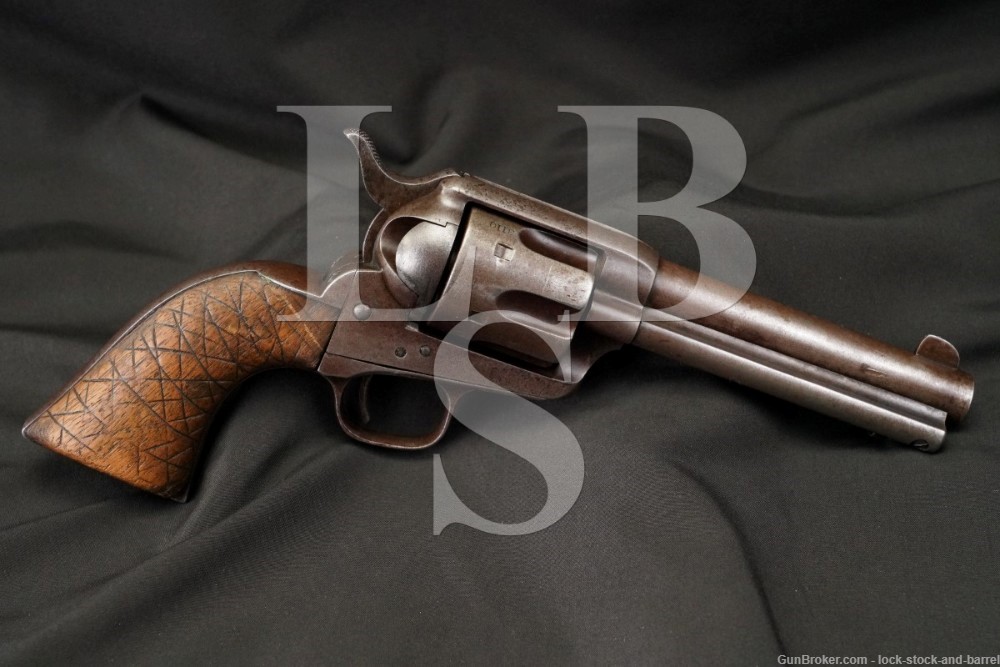 Markings: The top of the barrel is marked “+COLT’S PT. F. A. MFG. Co. HARTFORD, CT. U.S.A.+”, under the ejector rod housing at the rear the barrel is marked with “3110” and there are “G” and “0” in front of and behind the indexing stud recess. The bottom of the frame at the front, the bottom of the trigger guard at the front, the butt of the backstrap and the outside of the cylinder are each marked “3110”. There are small “A” inspection marks behind the trigger guard serial-marking, at the top of the backstrap behind the hammer and on the outside of the cylinder. The outside of the cylinder is also marked “P”. The left of the frame is marked “PAT. SEPT. 19. 1871 / PAT. JULY. 2. 1872” and “U.S.”. The rear face of the loading gate has assembly number “152”. The hammer slot is marked “0”.

Sights / Optics: The front sight is a blade fixed to the barrel. The rear sight is a “V” groove in the top strap.

Overall Condition: This revolver retains about 5% of its metal finish. There is some blue remaining on the top and bottom of the ejector housing and in protected corners of the trigger guard. Other surfaces have worn to white or gone to a mottled light-moderate patina. There is some scattered minor surface erosion. There are several nicks, scuffs and scratches including concentration on the butt. There is a short, thin crack in the ejector housing at the top-front edge. The action shows operational wear. The screw heads range from sharp to tool marked with usable slots. The markings are generally clear, some are worn, but legible. Overall, this revolver is in Fair-Good condition as Antique (see Mechanics).

Mechanics: The hammer does not properly catch at half-cock which impedes loading/unloading and disassembly/reassembly. Otherwise, the action functions correctly. The trigger is quite light and crisp. The cylinder locks with light play on each chamber. We have not fired this handgun. As with all used firearms, a thorough cleaning may be necessary to meet your maintenance standards.

Our Assessment: Colt’s Single Action Army is, perhaps more than any other, an iconic American pistol. It was the U.S. issue sidearm for the last two decades of the 19th century, used by pioneers, outlaws and lawmen across the expanding nation, and captivated audiences on the silver screen and television (and still does, today). This is an interesting example an early Single Action Army, made in 1874 with all matching serialized parts. The cylinder has the characteristic small, shallow lead-in grooves of early SAA production, which gradually grew from a total lack of a groove to the standard dimensions, with the final grooves being standardized around serial 19,000. The revolver certainly shows its age, but looks better than any of us will at 150 years old! Though its barrel has been cut back to 4 7/8″, this revolver’s early features will make for a fine addition to a collection. Please see our photos and good luck!