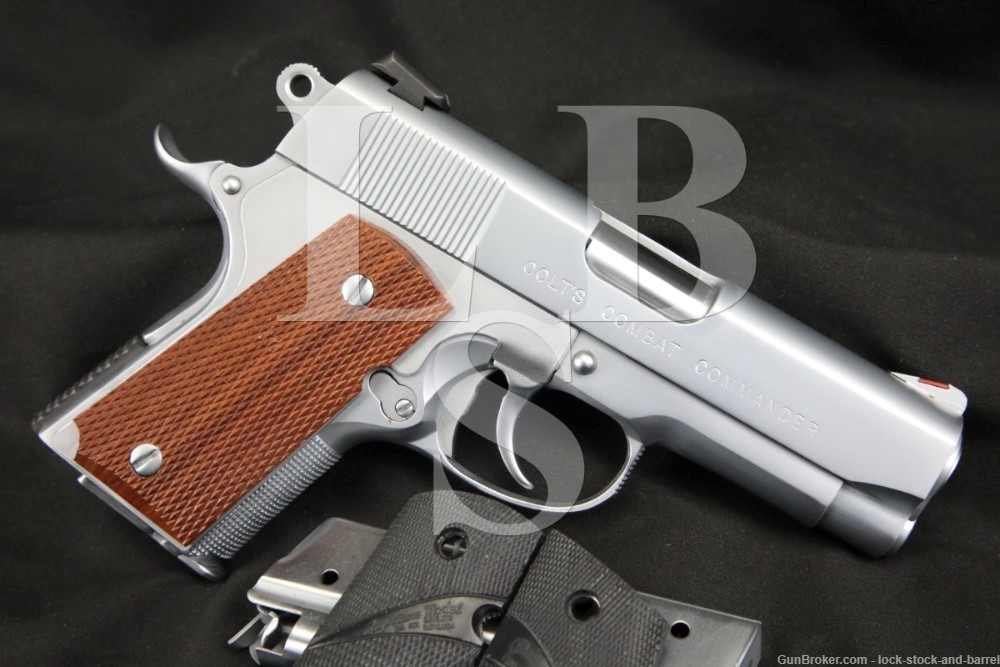 Model: Custom Double Action 1911. The pistol consists of a Colt Government frame and a Colt Combat Commander slide, both of which have been cut and shortened.

Sights / Optics: The front sight is an after-market ramped blade with a red isert, it is fixed to the front of the slide. The rear sight is a Lo-Mount style square notch sight dovetailed into the slide and further secured with a set screw.

Stock Configuration & Condition: The grips are two-piece checkered wood. There are a few scattered light marks from handling. The checkering is sharp. There are no chips or cracks. Overall, the grips are in Excellent condition.

Overall Condition: This pistol retains about 98% of its metal finish. There are a few scattered light handling marks. The action has light operational wear. The screw heads are sharp. The markings are clear. Overall, this pistol is in Excellent condition as customized.

Box, Paperwork & Accessories: Included is a pair of 7-round magazines and a pair of checkered black rubber Pachmayr grips.

Our Assessment: This 1911 has been customized by L.W. Seecamp, who was a respected master gunsmith and former Mossberg designer. Before inventing his more popular pocket pistols, he customized 1911s and converted them to DA/SA. Mr. Seecamp was trained as a master gunsmith in Germanys technical academy system prior to WWII and when the war broke out served in the Mountain Troops unit fighting the Russians. In a fight to the death, he had used his trusty Walther P–38 to save his life, he wound up with a bullet scat on his cheek and a few missing teeth but the genius of the double action system had saved his life. His experience convinced him that when all is on the line, point shooting is best and that the stiffness of a heavier double action pull will hardly be noticed when adrenaline spikes. Upon coming to America he was left with a conundrum, he like the 1911 for the reasons most of us do but just wished it was DA. After retiring from Mossberg, he set out to make the 1911 double action and converted one for himself and then offered the conversion to other people. The work required a skill set of his and was quite involved. The work began with cutting out a section of the right side of the frame. The conversion required a new hammer with a hook for a drawbar. A drawbar connecting the double-action trigger and hammer was fitted. This drawbar connects to the hammer hook and incorporates a return spring that is fastened to both the drawbar and the frame. This one has a Government frame that has been chopped and rewelded and a Combat Commander slide that has been shortened. The new trigger was secured to a pivot in the frame and swung in an arc similar to a conventional double action to both cock and drop the hammer. The trigger guard was elongated and welded to accommodate the trigger’s arc, giving the pistols a superficial resemblance to the Smith & Wesson 645. The resulting action was heavy but none the less manageable. The trigger presses the hammer against the original 1911 hammer spring. Attempts to use a lighter hammer spring may be met with misfires, so leave the original as it is if you intend to fire the handgun using the double-action mode. By the late 1970’s the firearms market had caught up with new designs, and the demand for custom worked pistols immediately started to decline. With the downfall of this custom market came the disappearance of Seacamp’s unique 1911s. When the company stopped making the conversions, they sold the rights to a few other companies, but it didn’t pan out and everyone discontinued the modification. Seecamp went on to produce his .25, .32, and .380 ACP pistols, the invention for which he is most recognized. This one has a hard chrome finish and sports wood grips, it is chambered for .38 Super and is a true find for the 1911 and custom handgun aficionados. Please see our photos and good luck!