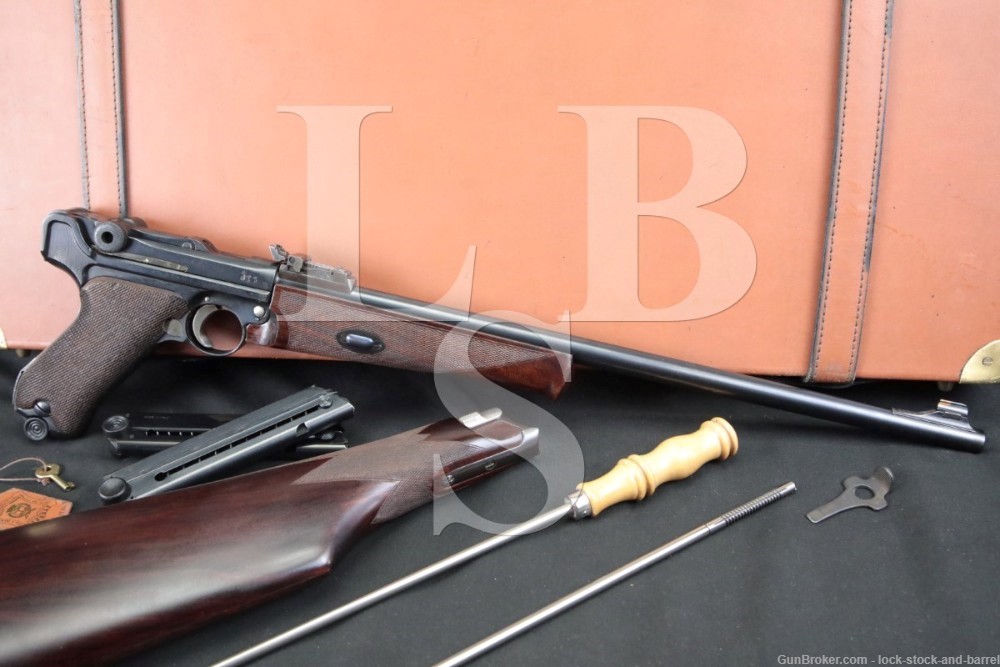 Make: The frame was originally made by DWM or Erfurt Imperial Arsenal, the receiver extension and action were made by Erfurt, we do not know who customized this pistol.

Year of Manufacture: It is not clear exactly what year the frame was made, the barrel extension was made in 1918. Due to modification from its original configuration, this pistol/carbine is considered Modern and must be transferred through a Dealer FFL.

Markings: The frame’s serial number is marked above the takedown lever, “4605V”, with the “0” double-stamped, one rotated 90 degress to the other. The left portion of the barrel extension is marked “5422”, the chamber ring is marked “1918”, the right portion of the barrel extension has Imperial inspection/acceptance marks. The top of the front toggle is marked with a small proof, a crown over “ERFURT” and “22”. The locking bolt, safety catch, safety bar and hold open latch are each marked “05”. The trigger is marked “35”. The bolt, each toggle link and the inside of each grip panel are marked “22”. The trigger bar is marked “59”. The ejector has an Imperial-era proof. The interior of the side-plate is marked “91” and has an Imperial proof on the trigger lever.  The rear sight arm and notch are each marked “32”. Some small parts have crowned “RC” markings.

Sights / Optics: The front sight is a brass beaded blade dovetailed to a textured, ramped base fixed to the barrel near the muzzle. The rear sight is a “V”-notch “fine-tune” sight on an arm with a slider. The rear sight arm is missing the hinge-pin which secures it to the base, it is held in place by the slider. The arm is graduated from 1-8 in hundreds of meters and the notch is fine-adjustable for elevation using a spanner tool.

Stock Configuration & Condition: The grips are two-piece checkered wood. A tang has been welded to the front of the frame for the wedge-secured checkered walnut forend which has a schnabel tip. There is an included checkered walnut buttstock with serrated black hard rubber buttplate which can be mounted to the frame’s stock lug (we have not tested the fit as it is not legal to install the stock in California). The grips show handling wear with some smoothed checkering at the bottom and rear edges. There are some scattered nicks, dings, scuffs and scratches. The checkering is mostly sharp. There are no chips or cracks. The forend and buttstock have no notable wear or damage, only light handling marks. The checkering is sharp. There are no chips or cracks. Overall, the grips are in Very Good condition, the forend and buttstock are in Excellent condition as not original to the gun.

Mechanics: Something about the fit of the sideplate, trigger and sear does not allow the sear to drop the striker when the trigger is pressed. As noted above, the rear sight arm is missing its hinge pin, secured to the base only by the slider. The barrel extension is tight to the frame. We did not fire this pistol. As with all used firearms, a thorough cleaning may be necessary to meet your maintenance standards.
Box, Paperwork & Accessories: This pistol comes with a hard-sided luggage case with locking brass latch, red fabric-lined English-fit interior with compartments for the pistol, stock assembly, the included three magazines (2x Mec-Gar, 1x unbranded), a cleaning rod, magazine load assist/screwdriver tool, key for the latch to secure the case, and additional compartments. The case has scattered light storage wear on the exterior, the interior has minor wear from the contents.
Our Assessment: The Parabellum-Pistole, commonly referred to as the Luger, was designed by Georg Johann Luger. Luger was an unlikely gun designer, born in 1849 he was the son of a surgeon, Bartholomaeus von Luger, and while attending university he served as a One-Year Volunteer with the 78th Infantry Regiment (Infanterieregiment 78 ein) of the Austro-Hungarian Army. While in the military Luger proved himself a skilled marksman and he began to develop an interest in the small arms technology. Following four years of service Luger worked a number of jobs in Vienna. Finally, in the 1870s Luger met Ferdinand Ritter von Mannlicher who recruited him as a sales representative for Deutsche Waffen und Munitionsfabrik AG (DWM). One of the company’s weapons that Luger marketed was the Borchardt C93 (named after its designer Hugo Borchardt) which was criticized for being too heavy and poorly balanced. Luger decided to rework the design and eventually secured a contract for his new pistol with the Swiss Army which dubbed it the model 1900 which was chambered for 7.65mm Parabellum cartridges. After some minor reworking Luger introduced the Pistole 1904, chambered for 9mm cartridges, which was adopted by the Imperial German Navy, the pistol was henceforth referred to as the Luger. A slightly altered version of the pistol with a smaller barrel was adopted for service by the Prussian Army in 1908, hence the designation P08. The P08 would become one of the most iconic weapons of the 20th century. Following the end of WWI Luger was bankrupted, he had invested in War Bonds which had become worthless following Imperial Germany’s defeat and worse yet he was forced out of his job by his employer DWM which sought to appropriate his patents. The ensuing legal dispute between Luger and DWM would be decided in his favor in 1922, but he was financially ruined by that time and passed away the following year at the age of 74. His pistol would continue to serve the German military during WWII (although the P38 was the Wehrmacht’s standard issue sidearm) and saw service in a number military and police forces after the war.

This example has been beautifully customized as a Luger carbine, featuring a beautiful checkered walnut forend and stock assembly and a 16 1/4? barrel installed. Some of the parts were produced by Erfurt Arsenal including the toggle which was made in 1918, however we do not know when the pistol was customized, nor who did the work. The pistol’s trigger mechanism needs some work, but with the included luggage case, this is a very handsome set which will display well. Once the mechanism has been fixed, the gun should also make for a fun shooter. The bore is outstanding and, where it is legal to do so, installing the stock should make for a very comfortable carbine. This is a nice find for Luger collectors and those with an interest in pistol/carbines. Please see our photos and good luck!