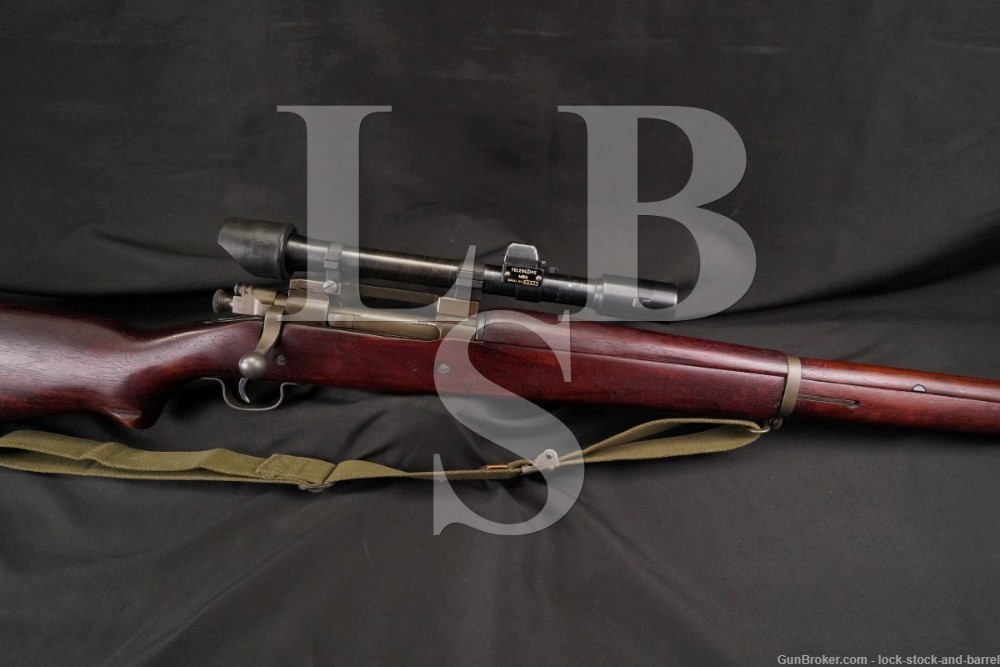 Markings: The left side of the receiver is marked “U.S. / REMINGTON / MODEL 03-A3” and the right side is marked “4992766”. The top of the Remington barrel is marked “R A / flaming bomb / 12 – 43”. The bottom of the barrel is marked “P”. The safety is marked “SAFE READY” and the magazine cutoff is marked “ON OFF”. The underside of the bolt handle, right rear of the bolt body, rear of the safety lever, magazine disconnect lever, left side of the nosecap, stacking loop, front sling loop and rear sling loop base are all stamped “R” for Remington.
The face of the grip is marked “P”. The belly of the stock is marked with inspection stamps. The left side of the stock, above the trigger, is marked, “RA” (Remington Arms), with an Ordnance Department “crossed cannons” cartouche, ”FJA” (inspector Frank J. Atwood) and “AA” which is a partial Augusta Arsenal Rebuild stamp. The marks on the wood appear to have been restamped.
The right rear of the scope base is marked “REDFIELD”. The scope is marked “TELESCOPE / M84 / SERIAL NO. 2890” on the side plate. The sling is marked “MRT 5-55”.

Sights / Optics: The front and rear sights have been removed to facilitate the use of a scope. A one piece Redfield scope base is attached to the top of the receiver by screws and by the rear sight base. This is the correct sight base for an 03-A4.
The M84 scope was used for the M1D Garand Sniper Rifle. It is a 2.2 power that uses a thin post reticle. The scope appears to have been refurbished or repaired in the past as it no longer has a tapered post reticle (this is common). The scope has a sliding sunshade on the front of the tube and a rubber eyepiece on the rear. It has two adjustment knobs under metal flip caps that turn. The top knob is marked “4” on the top and “0 1 2 3 4 5 6 7 8 9” on the interior. The side knob is marked “20 15 10 5 R 0 L 5 10 15 20”.  The tube shows scratches and discoloration from oxidation. It appears to have previously been set in a one piece scope base (used for an M1D Garand). The rubber eyepiece shows cracks. The view is clear.

Stock Configuration & Condition: The stock is a hardwood “Scant-Grip” replacement stock used for 03A4 rifles (page 117). The bolt handle cut out is swept back to match the angle of the 1903A4 bolt handle. The two piece oil stained hardwood has a pistol grip, nose cap with bayonet lug, stacking loop, barrel band, two sling loops, two through bolts, and a metal buttplate with hinged door for storage. The refinished buttpate has surface erosion showing through the new finish. The wood shows scattered scrapes & scratches. The bottom of the forearm shows several small scrapes that have damaged the wood. The right side of the grip is missing some surface wood. The LOP measures 13 1/4 inches from the front of the trigger to the back of the buttplate. The stock rates in about Very Good Plus overall condition as refurbished.

Bore Condition: The 2 grooved bore has sharp rifling. The muzzle and grooves are semi bright. There is light erosion in the grooves and at the muzzle. The bore shows an M.E. of 1.5.
According to page 354 of Joe Poyer’s book, The M1903 Springfield Rifle and its Variations, Remington sniper rifles were made with 2 groove and 4 groove barrels.

Overall Condition: This rifle retains about 93% of its metal finish. The metal shows light scrapes, small scratches and handling marks. The most prominent marks are on the barrel. The metal shows areas of discoloration from both oil residue and oxidation. The receiver and bolt show operational wear. The screw heads show use. The markings are deep. Overall, this rifle rates in about Very Good Plus to Fine condition.

Box, Paperwork & Accessories: The rifle comes with an M84 scope assembly; see above.

This Remington Model 1903-A4 Sniper Rifle was made during WWII. It has nice Remington markings on the receiver, barrel, bolt, and other small parts. The rifle has the correct serial number to fall within the 1903-A4 serial number ranges. It is topped with an M1D Garand M84 scope. The rifle and scope should keep you smiling out at the range. This 1903A4 Sniper will add to your WWII collection. Good luck.