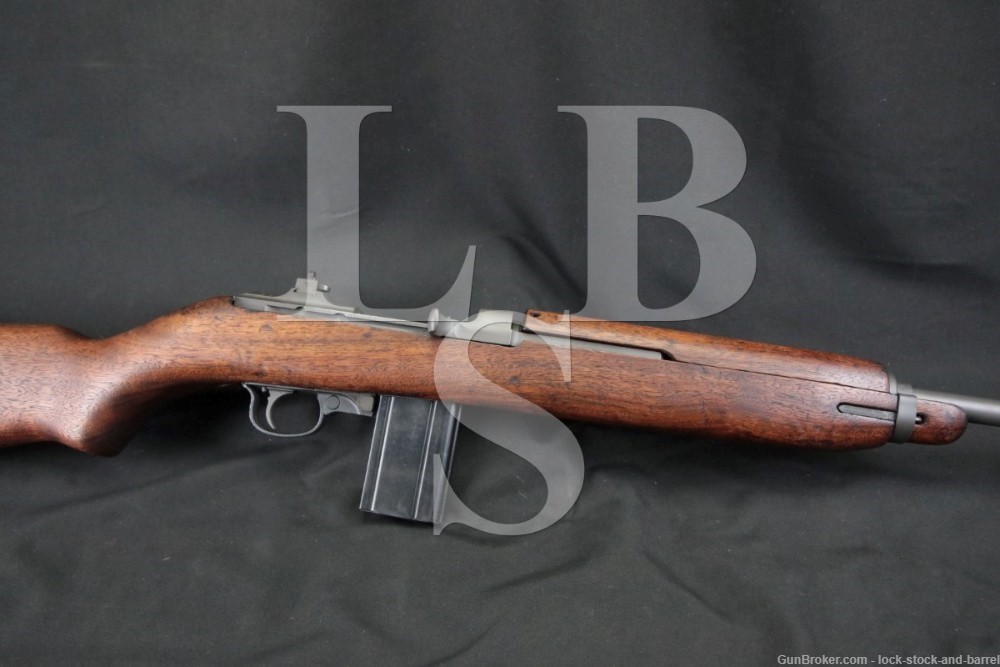 Make: Underwood Corporation. The receiver was subcontracted by the United Shoe Machinery Company.

Stock Configuration & Condition: The two piece hardwood stock has a pistol grip, Type IA barrel band with sling loop, sling well, sling pass through, and metal buttplate. The wood shows several scrapes and scratches. Many of the marks are small or light. The LOP measures 13 1/4 inches from the front of the trigger to the back of the buttplate. The stock rates in about Very Good Plus overall condition.

Bore Condition: The muzzle is gray due to refinishing. It was not covered properly when the rifle was refinished. The grooves are semi bright and rifling is deep. There is erosion at the muzzle. There is fouling and light erosion in the grooves. The bore shows an M.E. of 2.5.

Overall Condition: This rifle retains about 97% of its metal finish as refinished. The metal shows scuffs and light handling marks. The receiver shows a scrape below the left side of the rear sight. The left side of the barrel has some surface erosion bleeding through the new finish causing discoloration from oxidation. The receiver and bolt show light operational wear. Most of the markings are deep. Overall, this rifle rates in about Very Good Plus to Fine condition as refinished.

Mechanics: The action functions correctly. We did not fire this rifle. As with all used firearms, a thorough cleaning may be necessary to meet your maintenance requirements.
Box, Paperwork & Accessories: Box, Paperwork & Accessories: The rifle has a canvas sling attached. The rifle comes with a 15 round magazine. The magazine shows light surface erosion. It appears to function correctly.
The 15 round magazine is not available to residents of California or any other state with magazine capacity restrictions.

Our Assessment:  The M1 Carbine was developed and produced after WWII started. Over 6 million were made by a number of U.S. companies to assist with the all out war effort. The M1 Carbine was widely issued to U.S. Military Forces which numbered over 16 million during WWII. The M1 Carbine contributed greatly to U.S. efforts during WWII.
The Underwood Typewriter Company was a manufacturer of typewriters headquartered in New York City, New York. By 1939, Underwood had produced five million machines. In 1927 the company was reorganized into Underwood-Elliott-Fisher, which later became the Underwood Corporation. During WWII Underwood was one of the many companies who helped with the war effort. They produced about 8.9% of the total number of wartime M1 Carbines.

This “Matching” Underwood M1 Carbine was built back in 1944. The receiver was subcontracted by the United Shoe Machinery Company and is marked with a scarce “S” stamping below the serial number. The metal has been refinished so the rifle looks good. It will add nicely to your WWII or M1 Carbine collection.