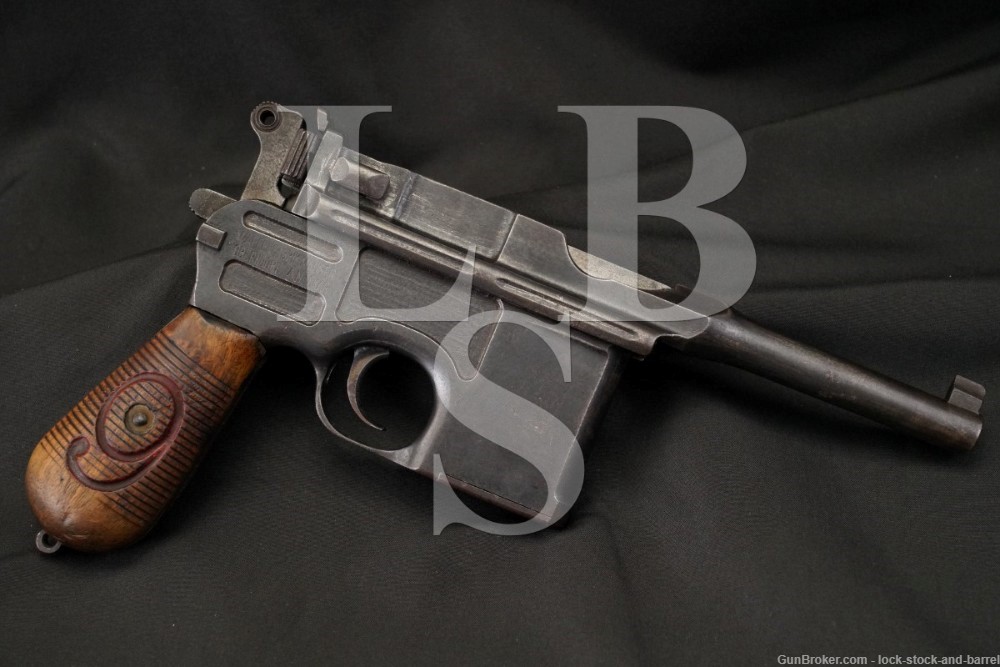 Barrel Length: 4”, the barrel was cut to conform to the provisions of the Versailles Treaty

Sights/ Optics: The front sight is a blade fixed by the muzzle. The rear sight is a “V”-notch fixed to the back of the barrel extension.

Bore Condition: The bore is semi-bright with mostly sharp rifling. There is some light-moderate erosion concentrated in the grooves.

Overall Condition: The pistol retains about 70% of its metal finish. There are some light-moderate handling marks, nicks and scuffs on the gun’s metal surfaces. Notably, there is light finish loss along the leading edges, scattered patches of light surface oxidation and some light oxidation around the muzzle. Some markings are faded, but most remain clear. The screwhead is lightly tooled and remains serviceable. Overall, the pistol is in Very Good condition.

Mechanics: The rear of the frame is slotted for a shoulder stock and the bottom of the grip has a boss for a lanyard ring, with a lanyard ring installed. The barrel extension fits tightly to the frame. This pistol has a “Neues Sicherung” (new safety) that requires the hammer to be pulled back slightly to allow the safety to be engaged. The action functions correctly. We did not fire this pistol. As with all used firearms, a thorough cleaning may be necessary to meet your maintenance standards.

Our Assessment: At the end of the 19th century semi-automatic handguns were being adopted by most major powers. Germany was at the forefront of this firearms revolution, a number of prominent designs coming from the relatively young nation (it took its modern form in 1871 following the Franco-Prussian War). Among the most iconic was the Mauser Model 1896 (remembered as the C96), designed by the Feederle brothers (Fidel, Friedrich and Josef) whom were close associates of Paul Mauser, the owner of the famous German arms manufacturer, and they all worked at Mauser’s experimental workshop. They developed a number of prototypes over the course of the early 1890s before finally perfecting what would become the C96 in 1896. A number of variations of the design were produced by Mauser over a production cycle that would last over four decades; most featured a 10 round fixed internal magazine that was loaded with stripper clips. Most C96s were chambered for the 7.63x25mm cartridge and a number were later also chambered for 9mm Luger rounds (several other chamberings exist as well, but these are the two most common by far). Mauser’s design was adopted by the German military and the company secured a number of contracts with various powers to sell the weapon to their armed forces; this included the Ottoman Empire, Italy, Persia and Austro-Hungary. The gun saw extensive use during WWI and was still in service during WWII with the Wehrmacht to a much more limited degree.

This particular specimen is a German contract “Red Nine” variant of the C96. The nickname “Red Nine” is a reference to the red colored number 9 on each grip panel indicating the gun was chambered for 9mm Luger rounds. These guns were developed during WWI because the German military wanted to chamber all its handguns to fire 9mm Luger rounds to avoid logistical issues. These guns were made between 1916-1918, and a number remained in service with the Reichswehr, Freikorps and various police formations during the turbulent Weimar-era (ca. 1919-1933). Many of the Red Nine C96s that remained in service after WWI had their barrels shortened in order to conform to the punitive provisions of the Versailles Treaty. This particular specimen belonged to a Prussian Schutzpolizei formation based in the Minden district during the Weimar-era. Minden was no stranger to the chaos that defined the Weimar-era, in response to the assaination of the liberal German foriegn minister Walther Rathenau by right wing extremists in 1922, left wing riots broke out in Minden (among other places) with a number of peoples homes and businesses sacked which the rioters claimed were owned by people with right wing sympathies. Indeed, this handgun comes from this chaotic period and was surely an important tool for the Schutzpolizei who struggled to maintain order. The gun has wear consistent with a gun made well over 100 years ago, but it remains mechanically sound and aesthetically pleasing. This is one handgun that historical firearms collectors will not want to miss out on!