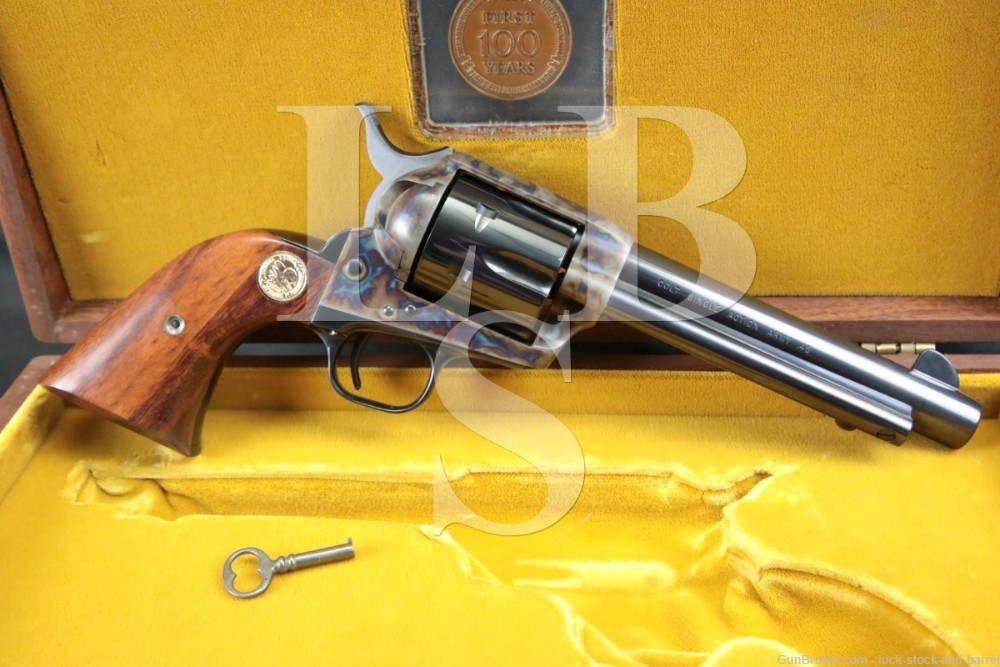 Sights/ Optics: There is a blade fixed by the muzzle and a square-notch fixed to the top-strap.

Stock Configuration & Condition/ Grip: The grip is two-piece smooth wood. The grips have a few light handling marks, but they lack any notable defects. There are no chips or cracks. Overall, the grip is in Fine condition.

Overall Condition: The revolver retains about 95% of its metal finish. The coloring applied to the lettering on the barrel has faded, otherwise the gun lacks any notable defects. The markings remain clear. The screwheads are unmarred and serviceable. Overall, the revolver is in Fine plus condition.

Mechanics: The action functions correctly. The gun has 4 clicks, all engage normally. We have not fired this revolver. As with all used firearms, a thorough cleaning may be necessary to meet your maintenance requirements.

Box Paperwork and Accessories: The gun comes with a wood case that features a NRA commemorative coin at the center of the cover and has yellow felt padding inside. Also included is a key to secure the case.

Our Assessment: The National Rifle Association was founded in 1871 and chartered in New York. The group was founded by William Conant Church and George Wood Wingate and it elected retired General Ambrose Burnside as its first president in 1871. The group’s original goal was to support marksmanship programs that could be used to help the military better train recruits. The organization was not initially dedicated to preserving ordinary citizens Second Amendment rights, it actually supported a number of restrictive measures including the 1968 Gun Control Act. The NRA would only begin to realign itself as a Conservative advocacy group in the 1970s, that is when it started to use its influence to oppose more restrictive measures vis-a-vis gun rights. The organization has a long and complex history. This particular revolver was made by Colt in 1971 to celebrate the group’s centennial anniversary. It is beautifully constructed with strong mechanics and is impressively finished. This is a great option that dedicated NRA members and fans of the Colt will not want to miss out on!