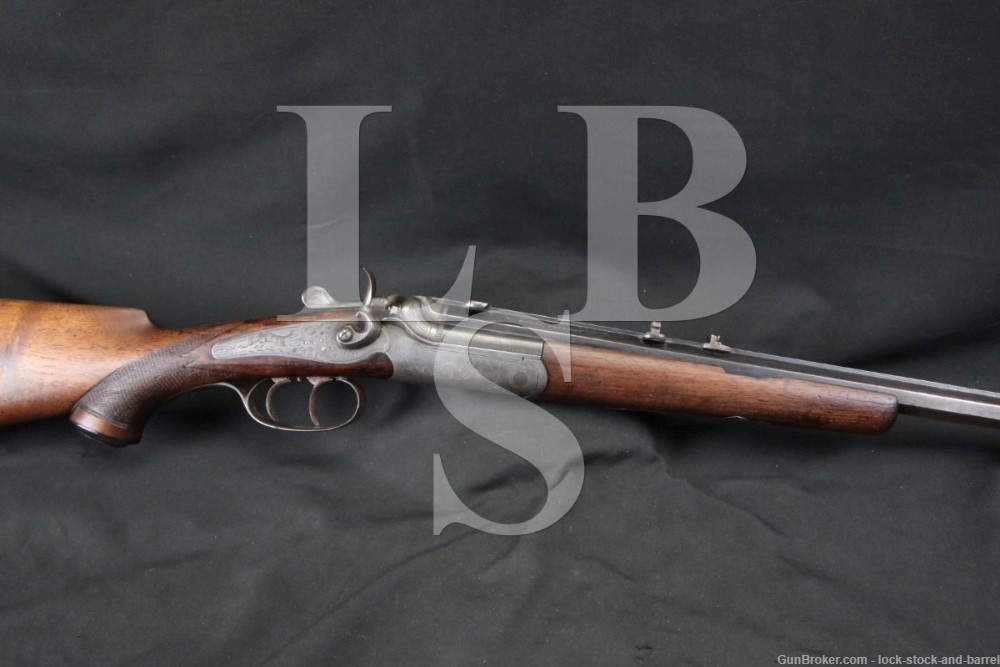 Caliber: The gun can chamber 8mm Mauser rounds, but we are not entirely sure what caliber the rifle was originally chambered for. Since the gun was made during the period where arms were chambered for both smokeless and black-powder cartridges, we recommend having the chamber cast by a qualified gunsmith to determine the appropriate round to use with the rifle to avoid any mishaps.

Sights/ Optics: The front sight is a blade fixed to the front of the barrel which is elevated. There are three dovetail slots on the rear portion of the barrel. The forward slot has a fixed “U”-notch with a flip up “V”fixed to the base as well. The center slot has a wide “U” notch. The rear slot has a plain male dovetail.  There is a slot at the rear of the top tang which allows for the installation of a target sight (no diopter or target optic is included or installed on the rifle).

Stock Configuration & Condition/ Grip: The stock is two-piece wood featuring a checkered detachable forend, a checkered semi-pistol grip with a black cap, a straight comb with a cheek rest on the left side and a black synthetic butt-plate. There is a sling swivel fixed to the bottom of the barrel and one fixed to the belly. The stock has some light-moderate handling marks, nicks and scuffs. Notably, there is a small chip on the right side of the forend (the broken piece of wood is included with the rifle). The checkering remains sharp. The LOP is 13.75 and 12.75 inches from the triggers to the rear of the butt-plate. The butt-plate has some light handling marks. Overall, the stock is in Very Good condition.

Type of Finish: Blue and Bright

Bore Condition: The bore is mostly bright with sharp rifling. There are some light spots of erosion concentrated in the grooves.

Overall Condition: The rifle retains about 25% of its metal finish. There are some light handling marks, nicks and scuffs on the gun’s metal surfaces. The gun has light wear along its leading edges, light wear around the muzzle and scattered patches of light surface oxidation. The barrel’s blue finish has taken a patina color as a result of the oxidation but the frame remains largely bright. The markings remain clear and crisp. The screwheads are only lightly tooled and remain serviceable. Overall, the rifle is in Very Good condition.

Mechanics: The action functions correctly. The barrel locks with no play on the frame. We have not fired this rifle. As with all used firearms, a thorough cleaning may be necessary to meet your maintenance requirements.

In 1870 Austrian locksmith Anton Sodia opened a gun shop outside of Ferlach, but his son Franz would move the business to Ferlach in 1910 and the firm came to be called “Franz Sodia.” Franz was drafted during WWI but he, along with his company, survived the chaos that saw the Habsburg Empire collapse at the end of the war. By the 1930s, the company was flourishing under the tutelage of Anton’s grandson, Franz’s son also named Franz. In 1938, Austria joined the Third Reich and during WWII the firm produced war material to support Berlin’s war effort. The company managed to survive WWII as well, it remained in operation until 1988 when it finally closed its doors.

This particular specimen was made in the final years of the Habsburg Empire before it ultimately collapsed in 1918. The gun has Austro-Hungarian-era proof marks and a construction typical of guns made in the late 19th and early 20th century. The gun has a beautifully engraved frame and remains a strong testament to the impressive arms made by Ferlach for several hundred years. The gun has some light wear, but its mechanics remain strong. Please see the caliber section for some important details about the rifle. This will surely appeal to historical firearms collectors. Good luck on your bid!