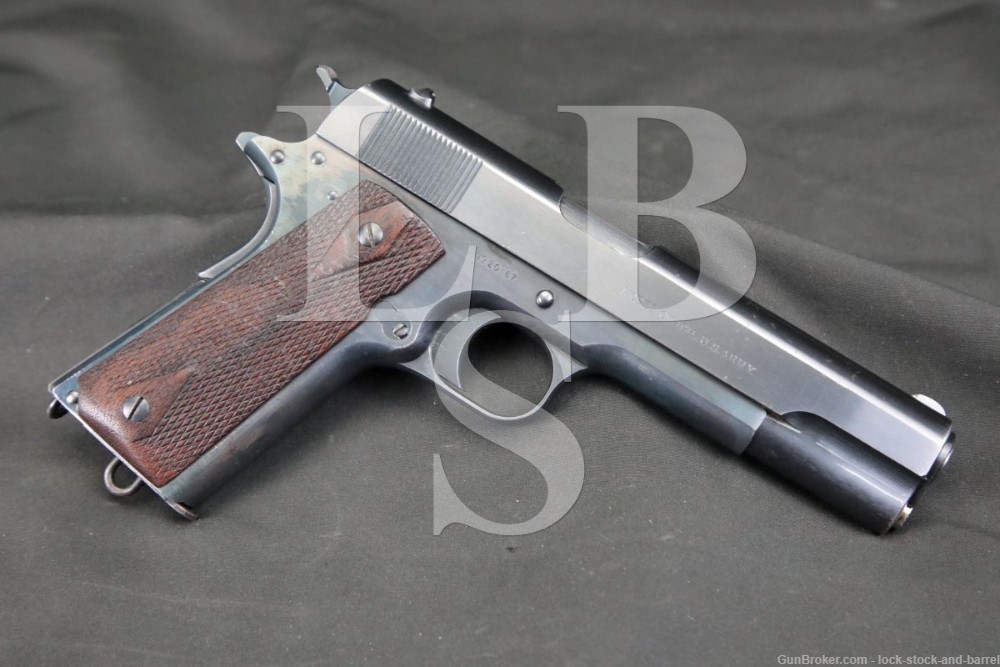 Stock Configuration & Condition: The grips are two-piece checkered walnut with smooth diamonds around the grip screws. The left panel has light handling wear with a few light nicks and scratches. Its checkering is well defined. The right panel has more moderate handling wear, scattered nicks and scratches, and its checkering shows more wear, but is still visible except at the bottom edge. There are no chips or cracks. Overall, the grips are in Good-Very Good condition.

Bore Condition: The bore is mostly bright with sharp rifling. There is some scattered light erosion and infrequent minor pitting.

Overall Condition: This pistol retains about 93% of its current metal finish. The finish is thinning at some edges. The slide’s frame is generally strong throughout with some minor nicks and scratches and infrequent spots of minor surface oxidation. The frame has some similar minor nicks and scratches, a few more spots of minor oxidation and there is some minor erosion which is mostly concealed by the grips when installed. The frame’s finish has some areas which have an iridescent appearance. There is some scraping under the finish at the United States Property marking. The grip areas have light handling wear which shows discoloration from oxidation. The action shows light operational wear. The screw heads range from sharp to tool marked with strong slots. The markings are clear. Overall, this pistol is in Very Good condition as refinished.

Box, Paperwork & Accessories: This pistol comes with a single 7-round magazine with a lanyard loop floorplate, the top portion finished in the white, and the body comes down flush with the bottom edge of the floorplate. The magazine has operational wear, minor surface oxidation, intact feed lips and a strong spring.

This is an early example of a 1911, made in 1913 before the outbreak of the Great War. The pistol has been refinished, so it looks great for its age, retaining a good bore and strong mechanics. This early 1911 will be a nice addition to any collection and is one you wouldn’t necessarily feel bad for taking out to the range to fire it. Please see our photos and good luck!