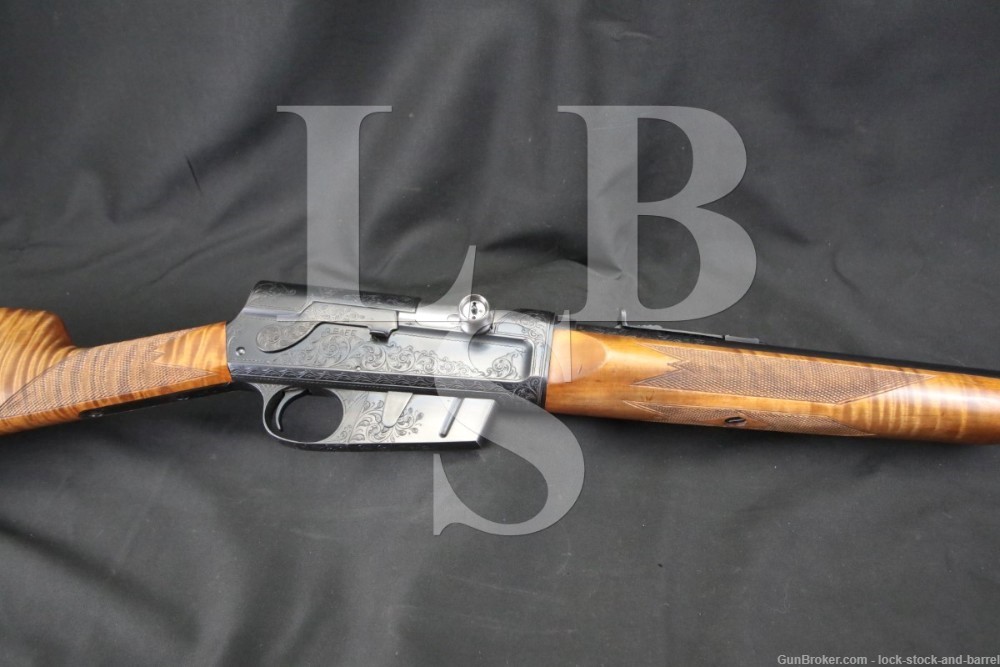 Stock Configuration & Condition: The stocks are aftermarket Hal Hartley upgrade stocks made of tiger stripe maple. The two-piece set has checkering, a straight grip, and an alloy Remington buttplate. There are some scattered compressions and draglines. There are a few little nicks and dings through the finish, some of the most noticeable are on the left side of the buttstock. There are some scattered light handling marks. There are no chips or cracks. The checkering is mostly sharp. The LOP measures approximately 14” from the front of the trigger to the back of the buttplate. The plate has some scattered light wear. Overall, the stocks are in about Fine condition.

Overall Condition: This rifle retains about 96% of its metal finish. There is some light wear at the muzzle. The barrel has some scattered little marks through the finish. The receiver has some spots of pinprick finish loss, most noticeable on the left side. There are some scattered light handling marks. There is some discoloration on the bolt handle. There are a few spots of surface frost on the receiver. The bottom tang has some mottled thinning. There are handling marks. There is standard operational wear. The screw heads range from sharp to lightly tool marked with strong slots. The markings are clear. Overall, this rifle is in about Fine condition.

Mechanics: The action functions correctly. We did not fire this rifle. As with all used firearms, a thorough cleaning may be necessary to meet your maintenance standards.

Our Assessment: The Remington Model 8 was the brainchild of John Moses Browning. Originally patented in 1900, it was the first successful high-powered semi-auto rifle made in the United States–or just about anywhere else, for that matter. It is a long-recoil operated rifle and feeds from a fixed magazine. The model 8 was chambered in four different Remington rimless cartridges, they were the .25, .30, .32, and .35 Remington. They were primarily used by hunters, though some law enforcement agencies adopted them and it was possible to modify them for removable magazines. It was even the preferred rifle of Texas Ranger Frank Hamer who used a customized .35 caliber model with 15-round magazines, and his was one of the two Model 8’s known to be at the ambush of Bonnie & Clyde. This is a Model 8E Expert, the rifle features beautiful scroll engraving and has a game scene on the left side of the receiver. Not only is this a beautifully factory engraved rifle, it sports a set of Hal Hartley stocks. Mr. Hartley was a gun and stock builder who specialized in maple stocks. His signature is the beautiful tiger stripes as seen here. He only used maple and on his stocks he didn’t use a stock blank or buy a commercial semi-fit stock and finish it. All his maple came from trees he selected and cut in the mountains near his house in North Carolina. He then trimmed them down and dried the wood before cutting them into stock blanks. He did all his own torching of the maple and the final cutting, finishing, and fitting of the stocks to the barrelled actions…not your average hobbyist. Mr. Hartley was even featured and wrote an article on barrel fitting for the February 1958 issue of Guns Magazine. This is a striking example of the Model 8 and will improve any collection it joins, this is the original American semi-auto rifle and something every collector needs! Please see our photos and good luck!