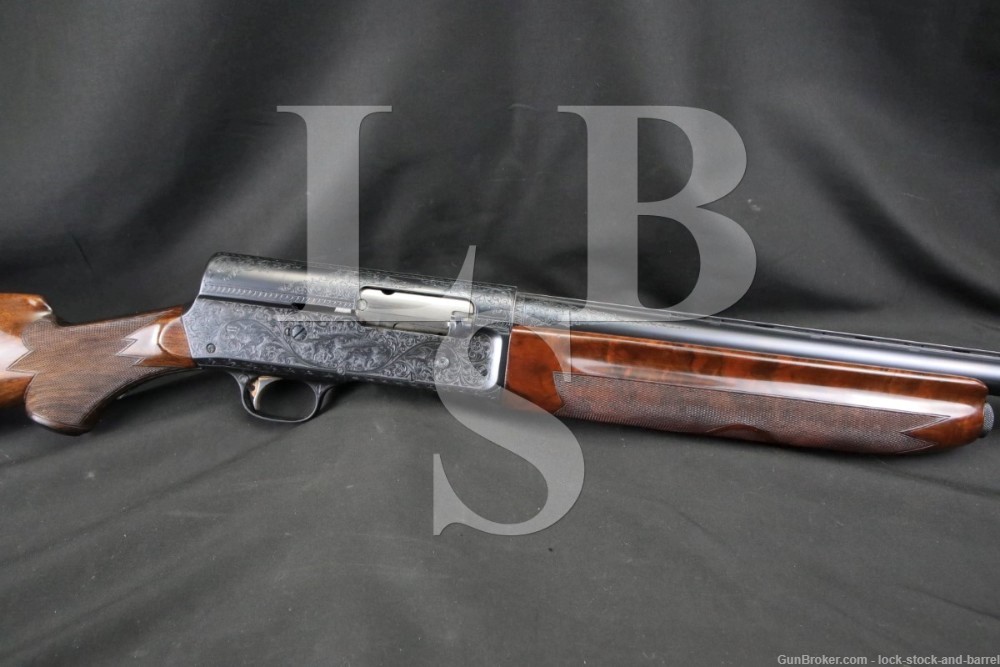 Sights / Optics: The front sight is a red bead set on the Cutts Compensator. There is a smaller metal alignment bead at the midsection. The top of the rib and receiver are serrated to reduce glare.

Stock Configuration & Condition: The stocks are a two-piece checkered walnut set. The forend has finger grooves and the buttstock has a pistol grip, straight comb, and a serrated composite Remington buttplate. The buttstock has an initial plate that is engraved with “OHV”. There is a spliced repair on the left side of the wrist at the receiver. There are some scattered compressions and draglines. There are a few scattered marks through the finish, they have mostly colored with age. Some of the most noticeable marks are on the comb, belly, and sides of the forend. There are some scattered spots of light finish wear. The checkering is mostly strong but has as few scattered compressions and scuffs. The LOP measures 14” from the front of the trigger to the back of buttplate. The plate has some scattered light marks. The stocks rate in about Fine condition.

Overall Condition: This shotgun retains about 95% of its metal finish. The majority of the finish wear is finish loss on the Cutts Compensator. The small magazine tube cap epin and its retaining screw are missing from the magazine tube cap. There are a few tiny marks on the bottom of the barrel. There are a couple of light marks through the finish on the receiver. The trigger has finish loss and discoloration from oxidation. There is finish wear on the edges. There are light handling marks. There is light operational wear. The screw heads are sharp. The markings are clear and crisp. Overall, this shotgun rates in about Fine condition.

Our Assessment: John Browning presented this design (which he called his best achievement) to Winchester, where he had sold most of his previous designs. When Winchester refused his terms, Browning went to Remington. Tragically, the president of Remington died of a heart attack as Browning waited to offer them the gun. This forced Browning to look overseas to produce the shotgun. It was manufactured by FN (a company that had already produced Browning-designed pistols) starting in 1902 as the Auto 5. Browning would later license the design to Remington, who produced it as their Model 11 (1911–1947). The Remington Model 11 was the first auto-loading shotgun made in the USA, originally as the “Remington Autoloading Shotgun(1905-1910)” before it was changed to the Model 11 in 1911. An interesting piece in Remington Firearm History. This one is a rare factory engraved Premier model, also known as the 11F. It has beautiful hand engraved scroll work with game scenes and checkered high grade walnut stocks. This one has hardly any wear and is truly a beauty, any collector would do well adding this to their safe. Please see our photos and good luck!