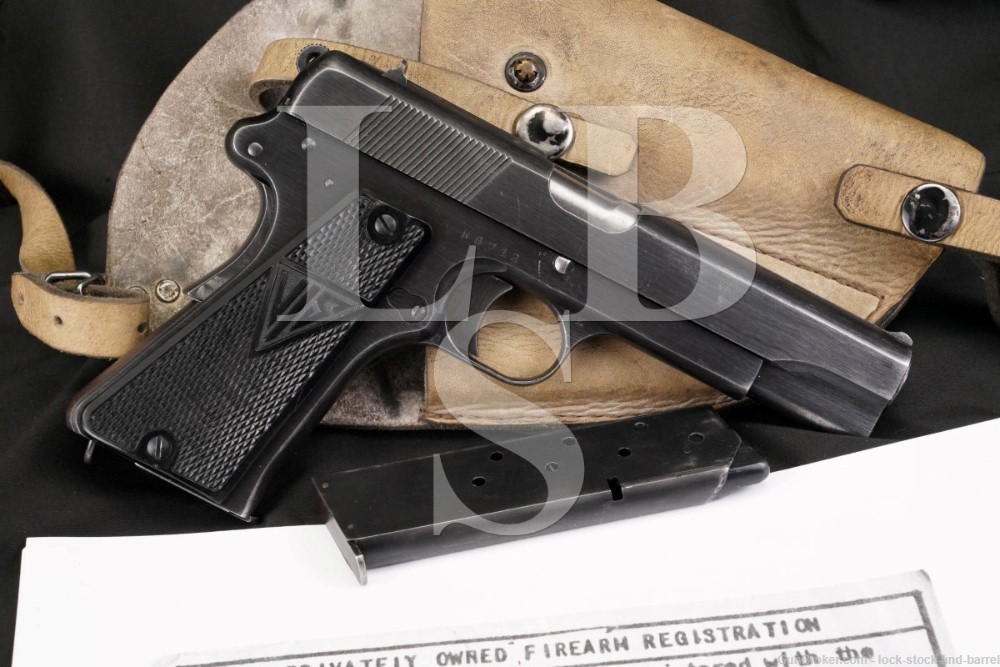 Action Type: Single-Action Semi-Automatic Pistol fed by a Detachable Magazine with a grip-safety

Stock Configuration & Condition/ Grip: The grip panels are two-piece checkered black synthetic with smooth borders. The grips have some light handling marks, nicks and scuffs. Notably, the left grip has a light crack at the top above the screw. The checkering remains sharp. Overall, the grips are in Very Good condition.

Overall Condition: The pistol retains about 75% of its metal finish. There are scattered light handling marks, scuffs and nicks. Notably, the finish has worn off the leading edges, there are scattered patches of finish loss on the top of the slide and some scattered spots of light surface oxidation. The markings remain clear. The screwheads are only lightly tooled and remain serviceable. Overall, the pistol is in Very Good condition.

Mechanics: The action functions correctly. The slide to frame fit is snug. The single action trigger is crisp. We have not fired this pistol. As with all used firearms, a thorough cleaning may be necessary to meet your maintenance requirements.

Box Paperwork and Accessories: There are a total of two 8-round magazines included with the handgun. The magazines have some light handling marks but both remain in Very Good condition. Also included is a cream colored custom made holster with shoulder straps. The holster is discolored and has light handling marks but it remains in Very Good condition.

Our Assessment: The Vis Model 1935 was a Polish handgun that was designed by Piotr Wilniewczyc, Jan Skrzypinski and Feliks Modzelewski that served as the country’s standard issue sidearm prior to WWII. The handgun was manufactured at Radom Arsenal (the gun is sometimes simply referred to as the Radom) and it proved an especially robust military sidearm. The gun was modeled on John Browning’s Colt M1911 with a similar aesthetic and grip safety. The gun was highly effective and credible arguments have been made that it is one of the best military handguns ever produced.

Following the German conquest of Poland in 1939 at the outset of WWII, the country’s resources were left at the disposal of the Third Reich. German soldiers were impressed with the Polish handgun, and during the German occupation the gun’s production resumed. It was redesignated as the Pistole 35(p), and it remained in service with the Wehrmacht throughout the entirety of the Second World War. While under German control, the Polish workforce at Radom worked under the most wretched conditions, as a result workers began to smuggle out parts for the handgun to the Polish underground. Eventually, German security forces recovered some Vis Model 1935s from defeated partisans and managed to trace them back to the factory. In order to intimidate the Polish workers at Radom, the German authorities arbitrarily executed fifteen laborers in front of their colleagues. Although Radom Arsenal was destroyed as the Red Army fought its way into Poland, the manufacture of the Vis Model 1935 was transferred deeper into the receding borders of the Reich in the final months of the war. The gun’s production finally ceased at the end of WWII, but it has remained a highly coveted collector’s item to this day.

This particular specimen appears to have been manufactured early in the German occupation; it meets the characteristics of Grade II sub-variation 1 as set by Jan C. Still in his book Axis Pistols (the characteristics are listed on page 67 of the book). Per the cosigner, the gun was acquired by their father George Popovice from a surrendering German officer in 1945 and it has remained a family heirloom ever since (unfortunately, we do not have bring back documentation to authenticate this). Despite this, there is included documentation which demonstrates that the cosigner’s father did have a Privately Owned Firearm Registration Form (NCAD Form 459) from 1968 when they were assigned to the New Cumberland Army Depot that indicates they had this handgun registered to them (among several other firearms). Although there is some superficial handling wear, the gun still remains aesthetically pleasing in addition to remaining both an ergonomic and aesthetically pleasing handgun. This is a great option for fans of WWII history and historical firearms collectors writ large. Good luck on your bid!