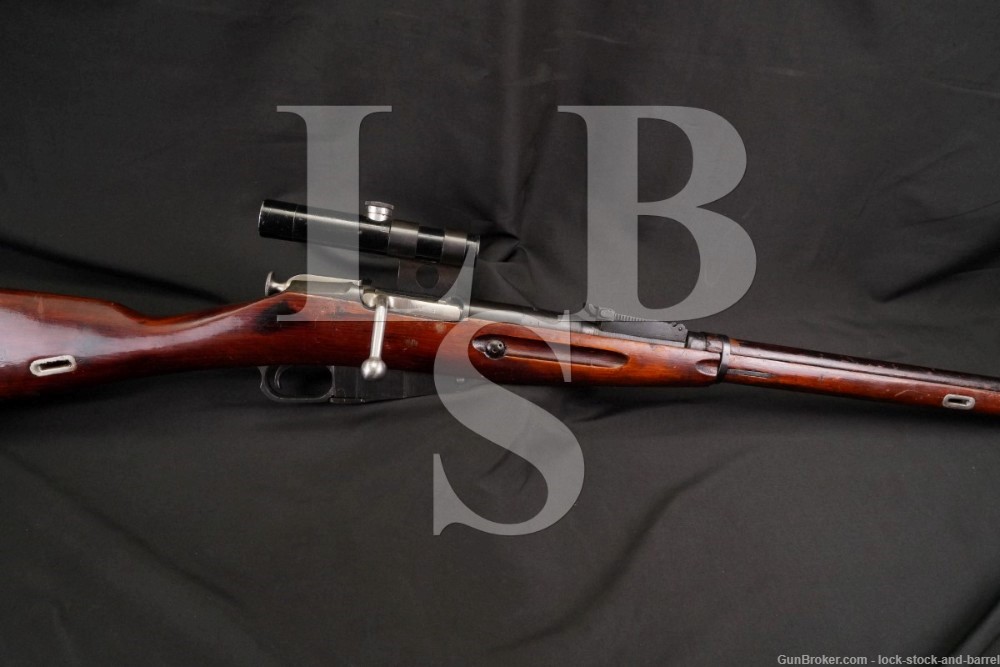 Markings: The barrel shank is marked “SN” which is an abbreviation for “Snayperskaya” (lit. sniper in English), the Tula Arsenal logo (a star with an arrow inside), “1943” which is the date of manufacturer, the serial number “YeP93” and the left side of the barrel shank is marked “44145” with a struck out “73” (serialization for a scope the gun had once been matched to). The left side of the receiver features a romanized version of the serial number, added by the importer CAI. The bolt is matching to the barrel shank and has Izhevsk proof marks on the safety and connector, the bolt’s body has a Tula proof. The magazine has a izhevsk proof and is force matched to the barrel shank. The butt-plate is force matched to the barrel shank. The front right portion of the barrel features the importer’s mark; “M91/30 RUSSIA 7.62X54 CAI ST ALB”.  The barrel bands have Tula stars.

Sights/ Optics: The front sight is a dovetailed post on a ramp with a protective hood. There is also a tangent leaf rear sight with a “U”-notch which is graduated in 100s of meters from 1-20, inclusive. There is a PU scope attached to the rifle which is mounted onto an appropriate base. The base has been force matched with an electric pencil to the barrel and scopes’ serial numbers, there is a faded Cyrillic serial number still visible as well “B0966” and some faded refurbishment marks. The scope is an original PU scope, it’s marked with a box that has an “X” inside of it indicating it was refurbished at former Soviet Arsenal No. 2 in Kiev, “53G” (1953 Goda; or the year 1953) which is when the part was refurbished and the serial number “22538”. The scope has clear glass and a sharp German style reticle. The scope has some light handling marks, but it remains in Very Good condition. Although the scope, base and rifle are not matching, they are all for a Snayperskaya which would make this a proper, albeit non-matching, sniper rifle.

Stock Configuration & Condition/ Grip: The stock is two-piece wood featuring a nose-cap, a slot in the forend for the included cleaning rod, a handguard, a sling eyelet situated between the barrel bands, forend finger grooves, a through bolt, a straight wrist, a slightly curved comb, a sling eyelet on the butt and a metal butt-plate. The stock has scattered light handling marks, nicks and scuffs. Notably, the handguard has a few light scratches, patches of finish loss and a moderate ding slightly ahead of the rear barrel band. Also, there are patches of finish loss at the bottom of the forend ahead of the trigger guard, scattered light scuffs and nicks on the belly including a patch of light wear at the toe and a light scrape on the right side of the belly. The LOP is 13.5” from the trigger to the rear of the butt-plate. The butt-plate has some light handling wear including finish loss along the leading edges.

Bore Condition: The bore is semi-bright with sharp rifling. There is scattered light-moderate erosion concentrated in the grooves.

Overall Condition: The rifle retains about 90% of its metal finish. There are some light handling marks, nicks and scuffs. Notably, there are scattered oil stains and some light surface oxidation visible around the recesses. The markings remain mostly clear. The screwheads are lightly tooled and remain serviceable. Overall, teh rifle is in Very Good condition.

Mechanics: The action functions correctly. We have not fired this rifle. As with all previously owned firearms, thorough and consistent cleaning may be necessary to meet your maintenance standards.

Our Assessment: The Mosin m/1891-30 was the standard issue rifle of the Red Army from 1930 until the end of WWII, and the “snayperskaya” variant proved one of the most effective sniper rifles of the conflict. This particular specimen is an authentic sniper variant of the m/1891-30 that was constructed by Tula Arsenal in 1943, the rifle had its scope mount and PU scope replaced during the post-WWII refurbishment process. This gun has several features only seen on snayperskaya variants: the marking “SN” on the barrel shank and serialization for a scope on the left side of the barrel shank (unfortunately, the original scope is not included). The snayperskaya m/1891-30 was put to lethal use by the likes of the skilled marksman Vasily Grigoryevich Zaitsev who dispatched over 200 fascists at Stalingrad (ca. 1942-1943) and the skilled markswoman Lyudmila Mikhailovna Pavlichenko who achieved over 300 confirmed kills during the fighting around Crimea (ca. 1941-1942). Unlike most Mosin “snayperskaya” variants on the market, this one was originally constructed as one which is not that common. Unlike a standard m/1891-30, these rifles were constructed with barrels that are designed to be more durable and accurate. This will certainly appeal to historical collectors and fans of the stalwart Mosin Three Line Rifle. Good luck on your bid!