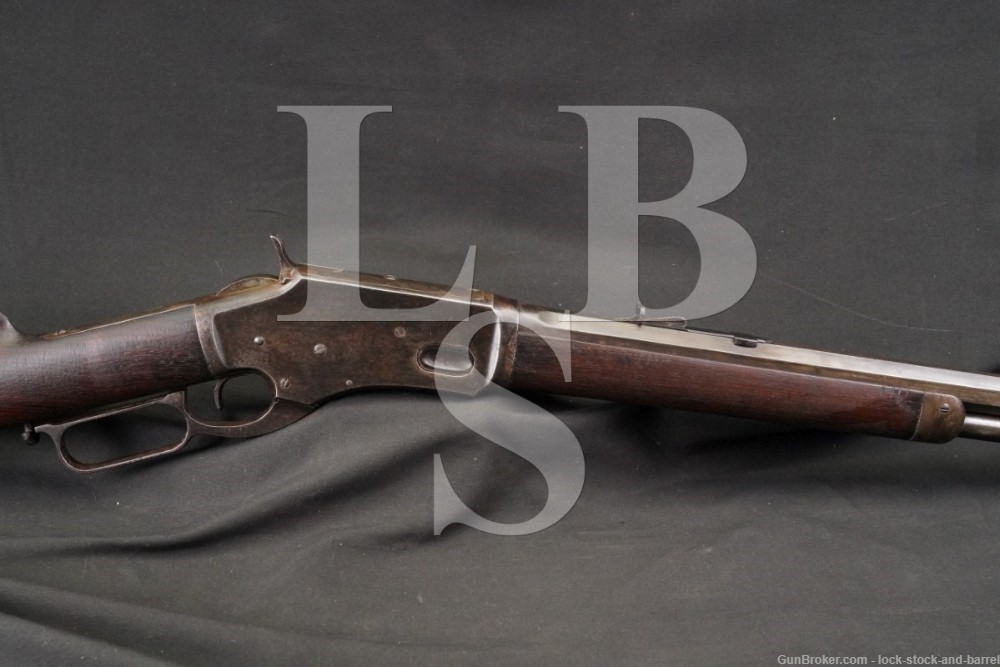 Stock Configuration & Condition/ Grip: The stocks are two-piece smooth walnut with capped forend, straight grip, straight comb and steel crescent buttplate with a sliding door over a storage compartment in the butt (there is nothing in the compartment). The stocks have some scattered light nicks, scuffs and scratches. There is a crack and a small loss on the top-left edge of the forend. There is a tiny loss at the top-front corner of the wrist on the left. There are four notches on the top-right edge of the forend near the front which appear to be intentionally applied. The LOP measures 12 1/2″ from the front of the trigger to the back of the buttplate. The plate has mostly gone to a mottled light patina showing scraping and erosion as well as treatment with cold blue. Overall, the stocks are in Very Good condition as refinished Antique.

Finish Originality: Some remaining finish may be Original, most surfaces show treatment with cold blue.

Bore Condition: The bore is dark. The rifling is generally well defined. There is scattered moderate erosion and pitting in the bore.

Overall Condition: The rifle retains about 25% of its current metal finish. The metal surfaces have a mottled appearance with old, worn cold blue and areas gone to a light patina. There is scattered light surface erosion. There are some nicks, scuffs and scratches. The action shows operational wear. The front screw for the bolt’s dust cover is missing. The remaining screw heads range from sharp to tool marked with strong slots. The markings range from clear to worn and incomplete. Overall, this rifle is in Good-plus condition as refinished Antique.

This particular specimen is a Whitney Kennedy-Tiesing Lever Action Repeating Carbine. The gun is a redesigned version of the Model 1878 Burgess Repeater which was redesigned by Samual V. Kennedy and Frank W. Tiesing which was designed to chamber the .44-40 Winchester Center Fire cartridge (a popular round at the time). The gun incorporates both Andrew Burgess’ patents (who designed the Burgess Repeater) in addition to a patent held by Kennedy and a joint patent held by Kennedy and Tiesing. The gun has the loop lever of the later production rifles made from mid-1883 through 1886. This is a sporting rifle variant of the iconic design and not one of the few sold to several Latin American countries for military service. The gun has wear consistent with an Antique firearm, but it remains fairly well preserved. This is a great option for fans of historical firearms. Good luck on your bid!