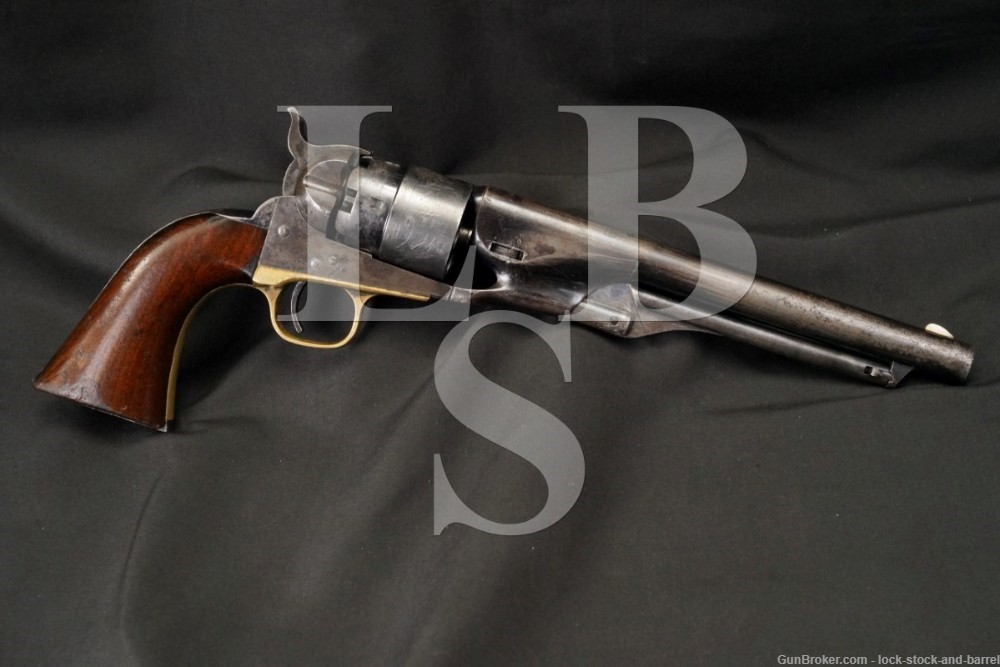 Stock Configuration & Condition: The grip is a one piece smooth walnut. The grip has light handling wear with some scattered nicks, scuffs and scratches. There is dark discoloration at the top-front on the left side and thinning finish at the bottom. There are a couple of tiny losses at corners. There are no cracks. Overall, the grip is in Very Good-plus condition as Antique.

Bore Condition: The bore is semi-bright and the rifling is sharp where not interrupted by erosion. There is some scattered light erosion and pitting in the bore.

Overall Condition: This revolver retains approximately 35% of its metal finish. The barrel has finish wear along each side, most of which appears to be from scrubbing out erosion. There are tool marks around the wedge on each side of the barrel. The lever has some case color remaining, mostly on the top of the lever and on the side-flats. The wedge also has tool marks and erosion on each side. The cylinder has scattered remaining finish, interrupted by wear and light-moderate erosion and pitting. The frame has some similar erosion, most notable on the left recoil shield but does retain some case color, mostly in the left flat. The backstrap has some color at the top but otherwise shows handling wear. Most exposed surfaces of the trigger guard have lost their silver plate, exposing the brass underneath, but there is some strong silver plate remaining in the portion covered by the grip. There are scattered nicks, scuffs and scratches. The action shows operational wear. The screw heads range from sharp to disfigured with usable slots. The markings are generally clear, interrupted in some areas by erosion. Overall, this revolver is in about Very Good condition as Antique

Mechanics: The action functions correctly. The barrel has no play to the frame. The cylinder locks up with very little play on each chamber. The trigger is crisp. We did not fire this handgun. As with all used firearms, a thorough cleaning may be necessary to meet your maintenance requirements.

Our Assessment: The Colt Model 1860 Army revolver was easily the most popular army revolver on both sides of the conflict during the American Civil War. Approximately 127,000 of these revolvers were purchased for use by Union forces and several of the Confederate states had obtained a few thousand before the start of the hostilities as well. The Model 1860 Army was the successor to the Third Model Dragoon and ranks third in total number produced of the various models of percussion Colt handguns.

This revolver was made in 1867 and is a commercial model, lacking any martial markings. All numbered parts are matching and some of the original finish is remaining, making it a nice find with collectors. While there is some erosion and pitting, the revolver retains remarkably strong mechanics, which shouldn’t be a surprise given the revolver’s history. The revolver comes from the personal collection of Rick Hacker, noted gun writer, NRA Field Editor and winner of the John T, Amber Literary Award. It includes a letter from Mr. Hacker detailing the history of the gun, which he states was purchased from Dixie Gun Works founder Turner Kirkland. While he was told that the blood etching on the gun was “from a Yankee, during the Great Rebellion”, the 1867 manufacture date of the revolver makes this an anachronistic claim, though there was certainly some unrest which persisted after the formal end of the Civil War. Mr. Hacker has actually fired this revolver in the course of his work. The gun appeared in a 2007 Guns & Ammo article for a shooting test, a 2014 issue of American Rifleman Magazine and in the 2017 issue of Gun Digest. You can even see a group shot with this revolver in an American Rifleman article titled “Why You Should Shoot Your Collectible Firearms” (https://www.americanrifleman.org/content/why-you-should-shoot-your-collectible-firearms/).

This revolver is a neat example of the 1860 which was made during an important period of American history as the nation recovered from the Civil War and expanded across the continent. Its great mechanical condition and documented previous ownership history only heightens its value to collectors and shooters alike. Please see our pictures and good luck!