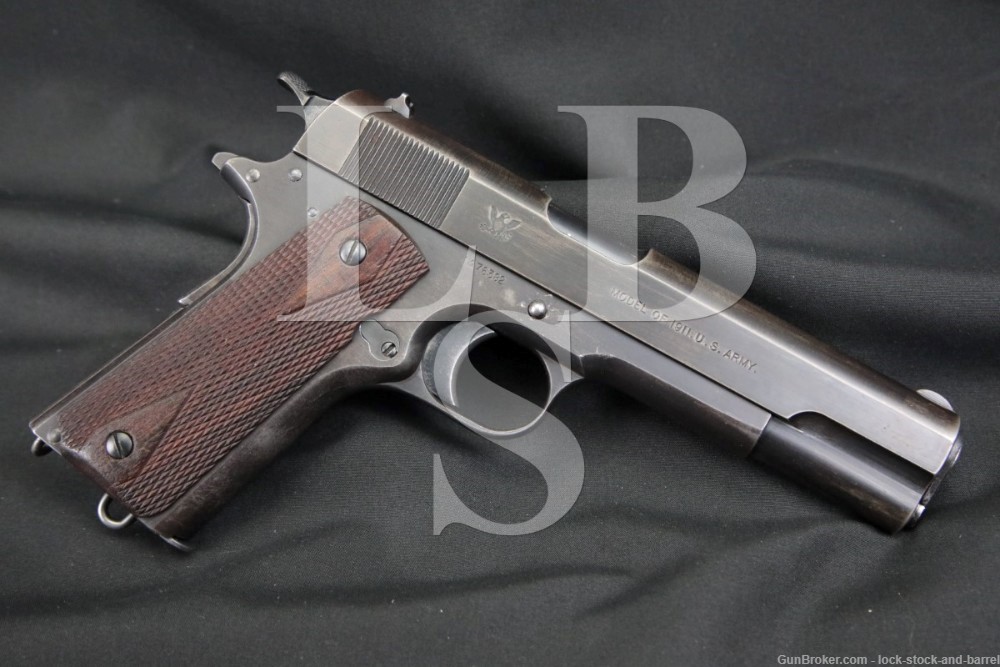 Markings: The left side of the slide is marked “PATENTED APR.20,1897 / SEPT.9,1902. DEC.19,1905. FEB.14,1911 / COLTS PT. F.A. MFG. CO.”, “SPRINGFIELD ARMORY / U.S.A.” and with a Flaming Bomb proof at the rear. The left of the frame is marked “UNITED STATES PROPERTY” and at the magazine release with a Flaming Bomb proof. The right side of the frame is marked “No 76382”. The right side of the slide is marked with an American Eagle Springfield logo and “MODEL OF 1911. U.S. ARMY.”. The left link lug is marked “S” (sideways), the right “S” and the rear of the chamber hood has an “M”. The following parts have a small “S” marked on them: Slide Stop, Thumb Safety, Mainspring Housing, Sear, Extractor, Firing Pin Plate, Grip Safety, Barrel Bushing. There are no “S” markings on the hammer, trigger, disconnector, or magazine catch.

Sights / Optics: The front sight is a rounded blade integral to the slide. The rear sight is a flat-top “U”-notch dovetailed to the rear of the barrel. Each corner has a 0.06? radius, typical of Springfield produced rear sights.

Stock Configuration & Condition: The grips are checkered walnut “Double Diamond” grips. The grips have some tool marks around the screw heads and scattered minor nicks and scuffs. The checkering is well defined. There are no chips or cracks. Overall, the grips are in Very Good-plus condition.

Bore Condition: The bore is gray with well defined rifling, mostly sharp. There is scattered light erosion in the bore and infrequent minor pitting.

Overall Condition: This pistol retains about 70% of its metal finish. The finish is thinning at all edges. The most notable finish wear is along the top of the slide with some on the sides around the markings. The grip areas show light handling wear. Most of these worn areas show discoloration from oxidation. There are some scattered light nicks, scuffs and scratches. There is an arc of scratching around the slide stop on the frame and slide. The action shows operational wear. The screw heads range from sharp to tool marked with strong slots. The markings are clear. Overall, this pistol is in Very Good condition.

Box, Paperwork & Accessories: This pistol comes with one 7-round magazine. The magazine’s finish is blued at the bottom with the top portion in the white, there is copper plating at the top of the spine and the body of the magazine is folded over on each side across the bottom of the lanyard-loop floorplate. The magazine has scattered wear and some light surface erosion. The feed lips are intact and the spring is strong.

Its design came from John Moses Browning with initial production by Colt, but when the pistol was first adopted by the U.S. Army, an agreement was reached that US Arsenals could produce the pistol, only after orders of at least 50,000 pistols had been received by Colt. The United States immediately ordered 50,000 pistols from Colt and set to work on a plan to produce the new model at Springfield Armory. Oddly, Colt actually didn’t have manufacturing drawings, so Springfield had to take 20 Colt production pistols, measure all of their parts, and average the dimensions of the 20 examples to arrive at their nominal dimensions, with the extremes of the measurements used for tolerances. Production would actually begin in 1914, but it appears that the method of determining nominal dimensions and tolerances and/or the lack of time spent training Springfield workers with the use of gauges and tooling led to some issues with the safety mechanism.

In September of 2014, the Commanding Officer at Springfield Armory corresponded with the Chief of Ordnance about this safety defect and 50 pistols were taken from August production for further testing. Thankfully for the collectors today, these 50 pistols selected for safety testing were documented by Springfield Armory and Springfield records note that serials 76351-76400 were used in the tests, including this pistol. The testing would result in changes to the manufacturing and inspection process, eventually resulting in adequate quality and retrofitting of existing pistols to correct the previous problems.

With the US entry into WWI becoming imminent, production ceased in 1917 in order to focus on rifle production. A total of 25,767 Model 1911 pistols were made by Springfield and they had some interesting features to differentiate them from Colt’s production. The front sights were integral to the slide, rather than a separate part staked in place, the rear sights had a slightly different radius at their corners, and the markings were of course different. This is Springfield Armory Model 1911 has several small parts as well as the barrel which have Springfield markings, though a few of the small parts appear to have been replaced. The pistol is in Very Good condition with much of its finish remaining, showing wear consistent with issue and service use. The Springfield made 1911s are always collectible, and this documented example of one of the 50 used in testing to improve the design and manufacture would be a wonderful addition to even advanced collections. Please see our photos and good luck!