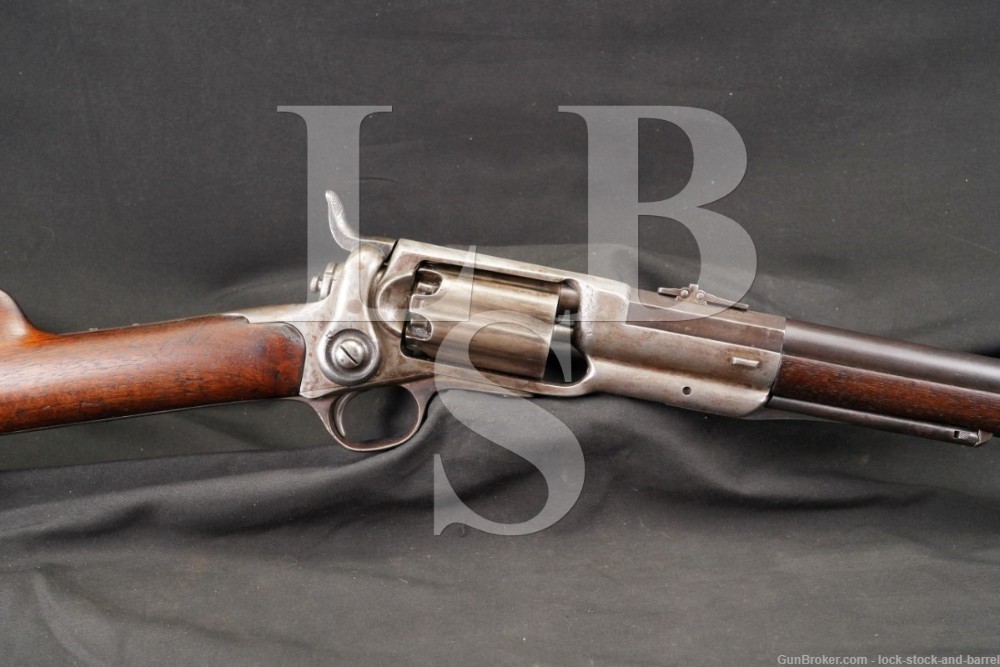 Sights/ Optics: The is a dovetailed base for a front sight, but there is no optic attached to the base. The dovetailed rear sight features two “V”-notch leafs. A tall one marked “600” and a short one marked “300”.

Stock Configuration & Condition/ Grip: The stock is two-piece wood featuring a brass nose-cap, a slot in the forend for the included ramrod, two barrel bands (the rear barrel band has a sling swivel), a straight wrist, a straight comb, a sling swivel on the belly and a semi-crescent butt-plate with a storage compartment. The stocks have some light-moderate handling marks, nicks and scuffs. Notably, there are two light cracks at the bottom of the forend that originate from the loading lever’s hinge. Also, there is a light crack between the receiver and top tang which is situated at the top left portion of the wrist and there is a small chip on the right side of the wrist where it meets the receiver. The LOP is 14.5” from the trigger to the rear of the butt-plate. The butt-plate is coated in light-moderate patches of surface oxidation and has some light handling marks. Overall, the stock is in Very Good condition for an Antique.

Bore Condition: The bore is grey and coated in scattered light-moderate surface oxidation concentrated near the muzzle, but the rifling remains sharp.

Overall Condition: The gun retains about 30% of its metal finish. The bluing under the forend is relatively well preserved. The finish in the frame and cylinder has worn off and along with the exposed portions of the barrel the gun is now coated in light-moderate surface oxidation which gives it a patina color. There are scattered light-moderate handling marks, nicks and scuffs. Notably, the muzzle is coated in erosion, there is light wear along the leading edges and some scattered patches of light pitting concentrated on the sides of the frame. The markings are a bit faded but still remain discernable. The screwheads are lightly tooled and remain serviceable Overall, the gun is in Very Good condition for an Antique.

Mechanics: The action functions correctly. The cylinder locks with light play on each chamber. As with all used firearms, a thorough cleaning may be necessary to meet your maintenance requirements.

Our Assessment: The Colt Model 1855 Revolving Rifle was a fascinating arm which was introduced only a few years before the American Civil War broke out. The gun had an action similar to the revolvers that made his company famous, but it was constructed as a rifle (there was also a carbine variant). In 1857 a small number of these guns were in service with the military (approximately 100), but when the Civil War broke out in 1861 orders for these unorthodox rifles started to roll in and many were commercially acquired by various formations (a common practice at the time). Thousands of these guns would ultimately see service, both sides used the gun but more were supplied to the Union. Afterall, Samuel Colt’s company was situated well above the Mason-Dixon Line, in Connecticut, and Colt was a commissioned officer in the Connecticut State Militia. The gun was used from the opening months of the conflict until the war ended in 1865, it was considered an effective arm by most of its users but the advent of breech-loaded firearms made it largely obsolete by the end of the conflict.

There are a number of different Colt Model 1855 Revolving Rifles that were made. This particular specimen is a .44 caliber rifle with a 21” barrel, a 6-round fluted cylinder and military stocks. The gun has a unit marking on the toe, but we are unsure what exact formation it identifies “3 / F. A. / S”. The action still functions correctly and, despite wear typical of such an old gun, the firearm certainly retains its distinct charm. This is a great option for historical collectors. Good luck on your bid!