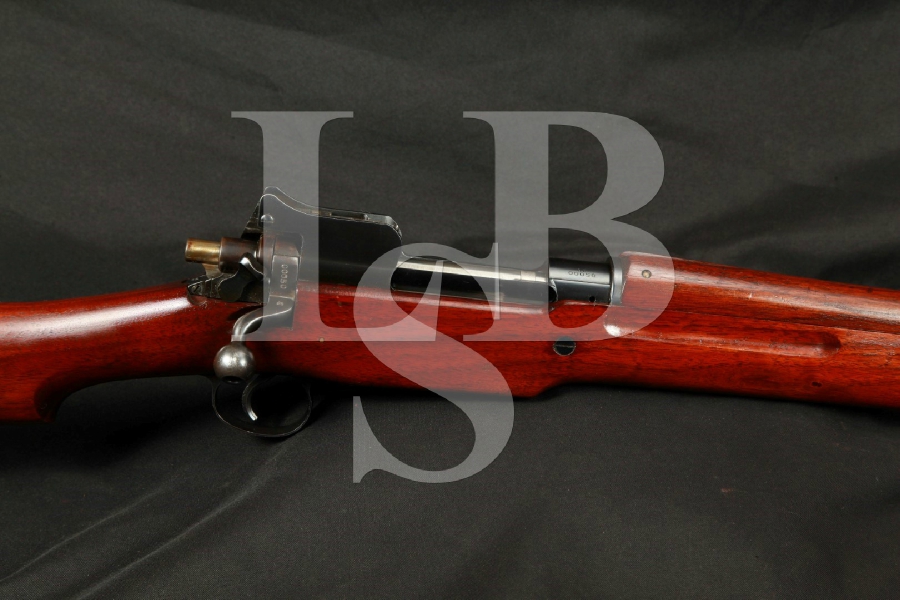 Sights / Optics: The front sight is a dovetailed set post set between two protective ears. The rear sight is an aperture when down. When flipped up it becomes a sight ladder that uses a sliding aperture. The ladder is marked from “2-16”. The volley sights are on the left side of the rifle. The front sight is attached to a dial that selects the range. It is marked “1500” and from “16-26”. The rear sight is a flip up aperture which is located on top of the bolt release lever.

Stock Configuration & Condition: The three piece hardwood stock has a straight grip, finger grooves, cutout for the volley sight, stacking loop, two sling loops, a metal nosecap, barrel band, a through bolt and a metal buttplate with a hinged door for storage. The right side of the butt and the left side of the stock, between the receiver and the bottom metal, show deep compression marks. The stock shows various other scrapes, scratches and compression marks. There is a small crack starting on the upper handgurad on the right side near the rear pin. The LOP measures 13 5/8 inches from the front of the trigger to the back of the buttplate. The stock rates in about Very Good Plus overall condition.

Bore Condition: The bore is semi bright and the rifling is deep. There is no visible erosion. The bore needs to be properly cleaned to remove fouling.

Overall Condition: This rifle retains about 97% of its metal finish. The front of the barrel and bottom metal shows light scrapes and marks. The storage door on the buttplate is scratched. The buttplate also shows some light thinning. The screw heads show some light use. The markings are deep. Overall, this rifle rates in about Fine to Excellent condition.

Our Assessment: This Pattern 1914 rifle was made by Remington as a contract rifle for the British during World War I. This is one of the first Pattern 14 rifles to be made as it has the serial number 00050. It must have been tucked away in storage early on because it is in great shape and still has nice looking intact volley sights. The finish and bore are impressive for a rifle that is over 100 years old. Here is some info from Wikipedia to help explain how Remington ended up making a British rifle: “…The primary contractor (Vickers) was unable to produce more than a handful of rifles, so the P14 became a de facto afterthought…the UK had an urgent need for rifles, and contracts for the new rifle were placed with arms companies in the United States. They decided to ask these companies to produce the new rifle design in the old .303 caliber for convenience of supply. The new rifle was termed the “Pattern 14”. In the case of the P14 rifle, Winchester and Remington were selected. A third manufacturer, Eddystone Arsenal – a subsidiary of Remington – was tooled up at the Baldwin Locomotive Works in Eddystone, Pennsylvania. Thus, three variations of the P14 and M1917 exist, labeled “Winchester,” “Remington” and “Eddystone”.