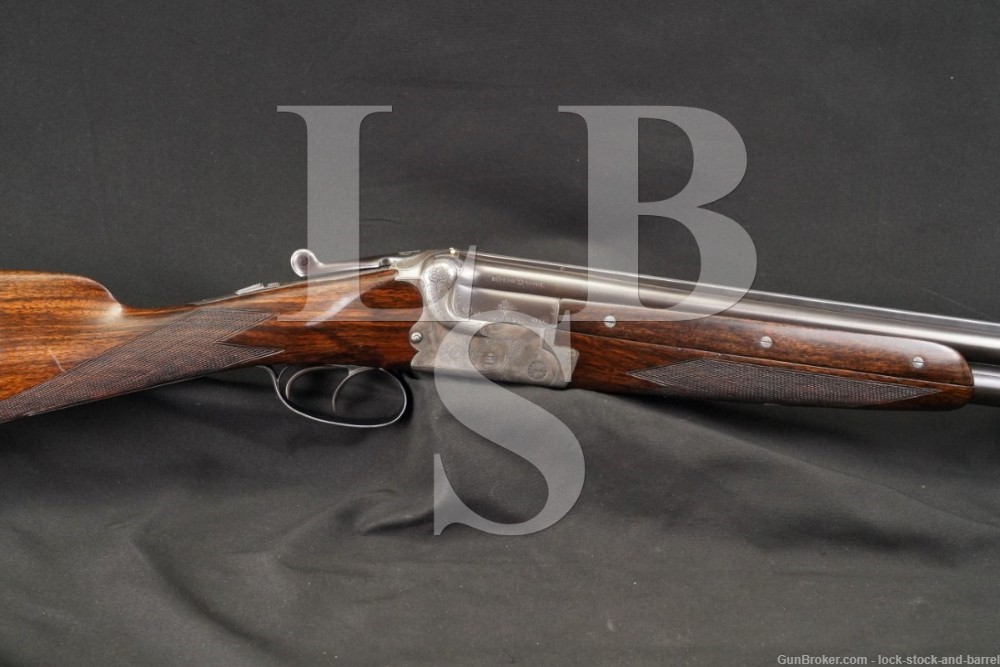 Markings: The top barrel is marked on each side with “BOHLER STAHL”, the left shoulder is marked “MERKEL FRERES / SUHL (ALLEMAGNE)”. The left of each barrel, concealed by the forend panel, has a series of German proof marks. The bottom barrel is marked below the ejector arm with “9/30” proof date, the bottom is marked with “18336 / 12 / BOHLER STAHL”. Each barrel has “L.K” indicating that the tubes were made by Louis Kelber. The left of the barrel lug has a “GM” in shield monogram. This monogram is found again on the inside of the forend next to “18336”. The left shoulder of the receiver is marked “18336”, the right has German proofs, the bottom of the receiver is marked “MERKEL FRERES” on banner over “ATM”. The guard is marked “18336”. The receiver and exposed portion of the forend iron have decorative scroll and border engraving.

Stock Configuration & Condition: The stocks are checkered walnut with a splinter forend, side-panels on each side of the barrels above the forend, straight grip, straight comb and brown rubber Decelerator buttpad. There is a filled hole in the belly where there was likely previously a sling stud (there is a sling mount fixed to the bottom barrel forward of the forend). The stocks have several light nicks, scuffs and scratches, most in the buttstock. There is a notable ding in the left of the wrist in front of the checkering. There is a very thin crack at the rear of the top tang. The checkering is well defined. There are no chips. The rear mounting screw for the left side-panel is sheared, it does not properly thread into the mid-rib. The LOP measures 14″ and 13 1/8″ from the fronts of the triggers to the back of the pad, 13 3/8″ and 12 1/2″ to the back of the wood. The pad has minor wear and is still supple. Drop at comb is approximately 1 1/2″, drop at heel 2 3/8″. Overall, the stocks are in about Very Good condition.

Bore Condition: The bores are mostly bright. There is no erosion in the bores, but there is some stubborn fouling.

Overall Condition: This shotgun retains about 85% of its metal finish. The finish is thinning at all edges. The barrels have some light scuffing along the sides, scattered minor wear and some areas which show a plum hue. The receiver has generally strong case color on the sides with muting and some minor surface oxidation toward the bottom. The guard has handling wear. There are some minor nicks and scratches. The action shows operational wear. The screw heads range from sharp to tool marked with strong slots. The markings are clear. Overall, this shotgun is in Very Good condition.

Mechanics: The action functions correctly. The barrels lock up with no play to the receiver. The ejectors function properly. The cocking indicators are located on each side of the receiver at the rear. The safety does not engage automatically when the action is opened, but functions properly when set manually. We have not fired this gun. As with all used firearms, a thorough cleaning may be necessary to meet your maintenance standards.

Our Assessment: The name Merkel has been around in Suhl for more than 200 years, with several different “Merkels” being known for making high quality sporting arms. Gebrüder Merkel, today known as Merkel Jagd und Sportwaffen, is the only one which has stood the test of time. Surviving two world wars, Soviet occupation and the East German state, it is still around to this day! This shotgun is a bit of a mystery, having markings which most likely indicate that it was made for export to France, it is also possible, though unlikely, that it was made in France by ATM (Automoto) under license for Merkel. In any case, it is a wonderful vintage over/under in Very Good condition, appearing to have spent its life in the care of responsible sportsmen. The gun is lightweight and factory choked Improved Cylinder over Cylinder Bore, so it should make for a great upland bird or even skeet gun. It is a beautiful gun that would be perfect for any sportsman who can appreciate its mix of beauty and quality. Please see our photos and good luck!