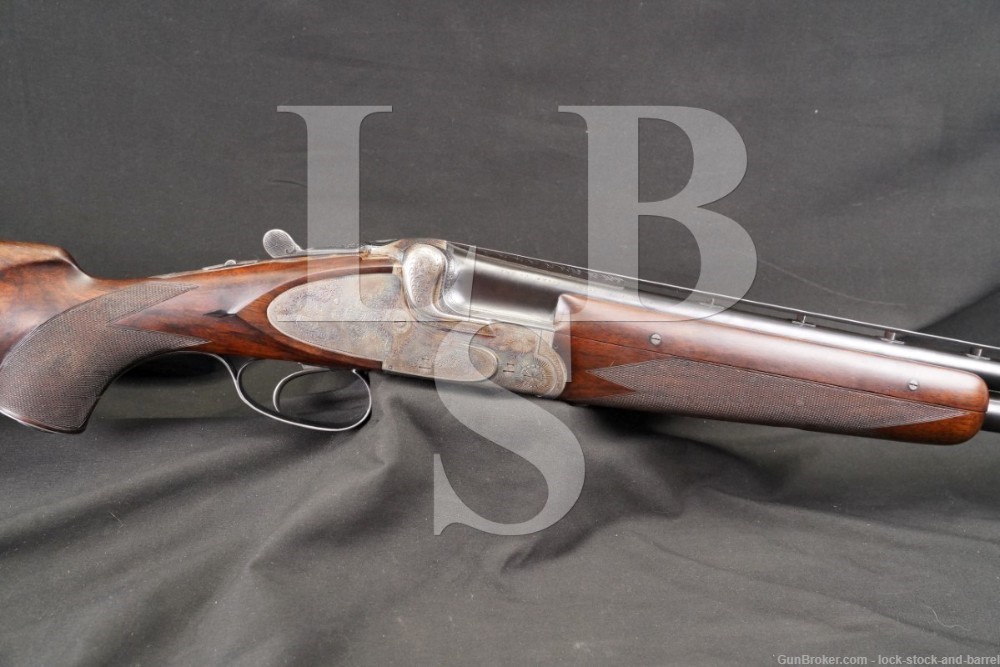 Choke: The top barrel has a Full choke and the bottom barrel has a Improved Modified Choke. Both chokes are fixed.

Barrel Length: 28” with a ventilated rib, the rib is sound and tight.

Sights/ Optics: The front sight is a red bead and there is a red colored bead about half way down the rib.

Stock Configuration & Condition/ Grip: The stock is 4 piece wood featuring a checkered detachable forend, two smooth wood side panels, a checkered semi-pistol grip with a engraved metal cap, a fluted straight comb, a medallion on the belly and a textured black synthetic butt-plate. The stock has some light handling marks, nicks and scuffs. Notably, there is a tiny crack at the tip of the top tang. The LOP is 14.5” from the trigger to the rear of the butt-plate. The drops are approximately 1.75” and 2.5” inches from the comb and heel respectively. The butt-plate has some light handling marks. Overall, the stock is in Very Good-Fine condition.

Bore Condition: The bores are mostly bright with some light erosion concentrated around the muzzles.

Overall Condition: The shotgun retains about 65% of its metal finish. There are some light-moderate handling marks, nicks and scuffs. Notably, the case-colored receiver’s finish has largely worn off, with some surviving finish on the top tang, concealed by the barrel and on the sides. The barrels have a patch of moderate finish loss on the forward left side, light wear around the leading edges and some light wear around the muzzles. Some of the markings have faded but most remain clear. The screwheads are lightly tooled and remain serviceable. Overall, the shotgun is in Very Good condition.

Mechanics: The action functions correctly. The barrels lock with no play on the frame. We have not fired this shotgun. As with all used firearms, a thorough cleaning may be necessary to meet your maintenance requirements.

Our Assessment: Friedrich Wilhelm Heym was a Suhl based industrialist who founded his namesake company in mid 1865. The company is most famous for the shotguns and rifles it has produced. The company primarily exported its goods to the Russian Empire before shifting its focus to the United States around the time WWI broke out (Germany and Russia went to war in 1914). Ironically, Germany would end up fighting the United States as well in 1917. Despite this, when WWI ended the company continued to export arms to the U.S., primarily exporting shotguns and drillings. The company survived WWII and remains in operation today.

This particular specimen is an over/under shotgun, designated the Grade No. 9D, which was made during the Weimar-era based on the proof marks. The gun has some handling wear but it retains its beautiful engravings and is still mechanically sound. The gun should make a wonderful addition to any collection. Good luck on your bid!