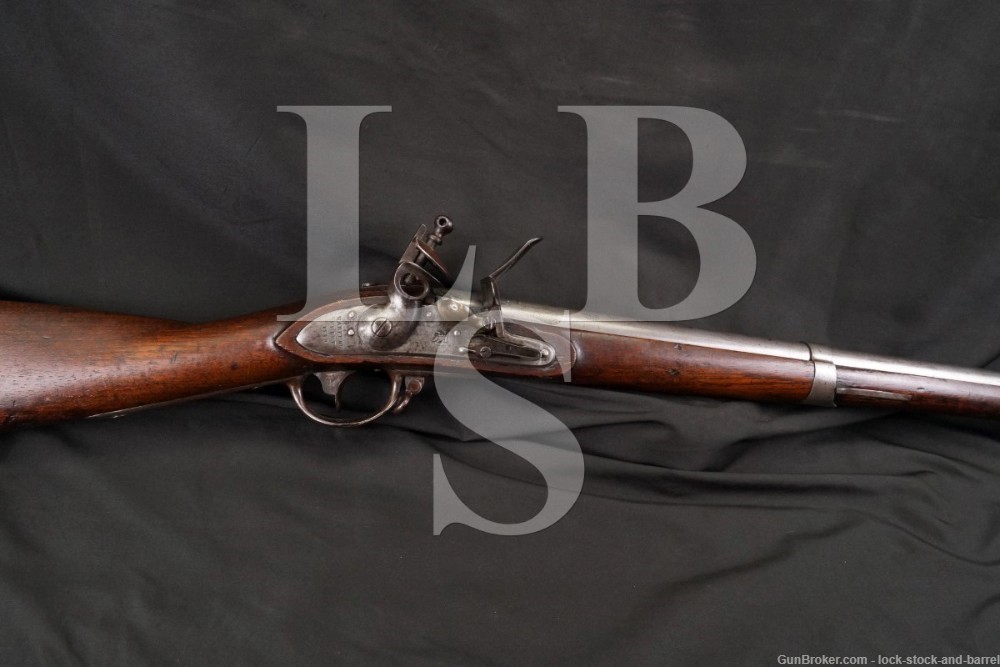 Stock Configuration & Condition/ Grip: The stock is one-piece wood featuring a nose-cap secured by a spring, two barrel bands secured by springs (the forward barrel band has a fixed sling swivel), a provision in the forend for the included ramrod, a lock-plate secured by two screws, a side-plate, a sling swivel fixed to the front of the trigger guard, a straight wrist, a straight comb and a metal butt-plate. The stock has some light-moderate handling marks, nicks and scuffs. Notably, there is a light ding at the tip of the top tang, a moderate ding on the belly, a light ding by the toe and some light wear surrounding the borders of the lock-plate. The LOP is 13.5” from the trigger to the rear of the butt-plate. The butt-plate is coated in light surface oxidation and has some light handling marks. Overall, the stock is in Fine condition for an Antique.

Bore Condition: The bore is dark with scattered light-moderate oxidation.

Overall Condition: The musket has no metal finish. The gun was finished in the white, the brass pan is entirely tarnished and the lock’s original case coloring has entirely worn off. The gun has some light handling marks, nicks and scuffs. Notably, the gun is coated in scattered patches of light surface oxidation. The markings remain clear. The screwheads are lightly tooled and remain serviceable. Overall, the Antique musket is in Fine condition.

Mechanics: The action works normally. We have not fired this musket. As with all previously owned firearms, a thorough cleaning may be necessary to meet your maintenance standards.

Box Paperwork and Accessories: There is a ramrod installed into the forend.

Our Assessment: The U.S. Model 1816 Flintlock Musket was manufactured between 1816-1840. Over 325,000 of these muskets were made at Springfield Armory and 350,000 were produced by Harpers Ferry in addition to a number assembled by subcontractors. The gun saw extensive use prior to the Civil War with the musket employed during the Mexican-American War (1846-1848). While a large number of these muskets had been converted to the percussion ignition system prior to the Mexican War, US forces preferred the flintlock ignition system due in part to percussion cap shortages. A large number of flintlock variants of the Model 1816 were stored in Southern Arsenals when the Civil War broke out and at the outset of the conflict many unfortunate Confederate soldiers had to enter battle with the aged flintlocks.

This is a Harpers Ferry manufactured Model 1816 that retains its original flintlock ignition system. The gun is beautifully preserved with a fully functional action and it remains aesthetically pleasing. It is an important early U.S. martial arm that saw use in some of the most important conflicts America was ever engaged in. This is a great option for historical firearms collectors. Good luck on your bid!